The willow tree has been contemplated for centuries.  Below, the willow is depicted in this 12th Century Chinese drawing:

(image from here)
Like many people, I’ve always loved willow trees.  Not only are they incredibly beautiful, but there’s just something mysterious and soulful about them.  I have very early memories of them as a child and they certainly made a lasting impression on me.  I was born in Illinois, and with so many lakes, there are weeping willow trees everywhere.  My mom & I moved to Virginia when I was 4 years old, but since then I’ve been visiting my dad every summer & during holidays, and I always love seeing the willow trees dotting the roads and the lakes. 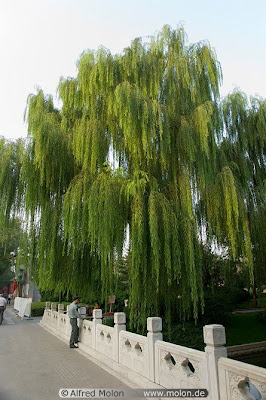 When we moved to Virginia, I used to have this dream about a beautiful lake surrounded by willows near where my mom and I had lived back in IL.  I never really knew if it was a dream or a memory because I was so young… 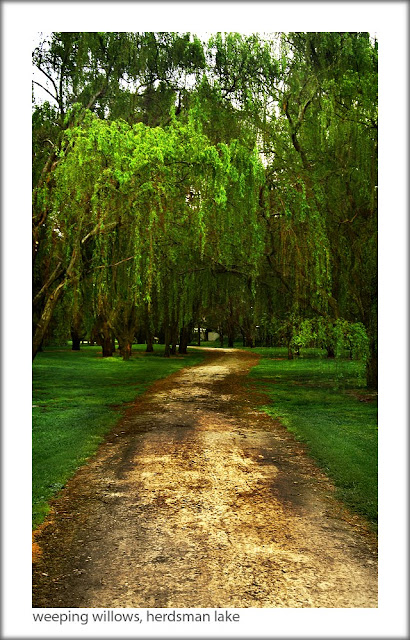 Photo by Lloyd Snook
But what’s really got me thinking of willows lately, is our water-logged swamp-of-a-yard.  With all of the snow and rain, it’s pretty much a bog.  Our property backs to a creek and most likely has underground springs beneath it.  Our yard barely dried last year and we had to wear rainboots on many occassions well-into the Summer.  We recently learned from a neighbor that our whole subdivision used to be a farm and guess what our propery was???  Oh yes, the pigs’ wallow: 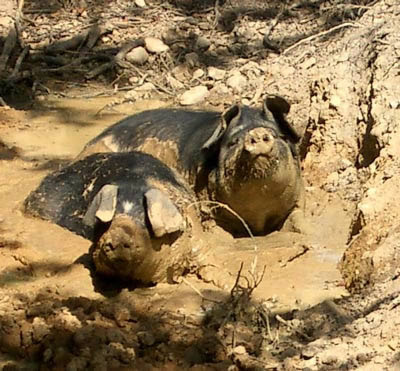 awesome.  So, we have a bit of a water problem.  (never dull here, right?)  We’ve been told by numerous water people/experts/ etc that french drains won’t be enough to fix this mess.   The pine trees that line the back of our property are struggling.  A landscaper recently confirmed for us that they just can’t take this much water & need to be removed. 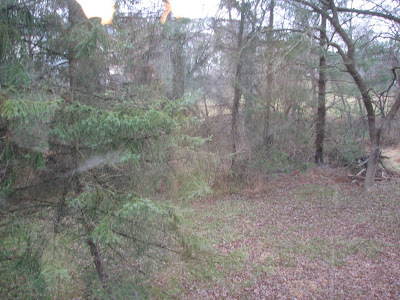 He recommended replacing them with river birch and/ or… weeping willows to suck up the water!  I was so excited.  wahooooooo!  “WILLOW!!”  (And yes, I’m saying that in the creepy goat-voice from the movie Willow.)

I can’t wait!! I have always been thinking of putting a willow tree in.  But he said 6!!  He also said we’d need to watch out for the creepers from the willows but that doesn’t bother me since I’d much rather cut back massive growth than sit back patiently & wait.  (However “wrong” this may be, I love plants that attack: mint, wisteria, honeysuckle, wild roses and yes, willow too!  I have a very black thumb and have even managed to plant mint only to have it not spread a lick so I need all the help I can get. 😉
Image from Wyuka Cemetary from here.
And Monet’s willows by the bridge at Giverny… 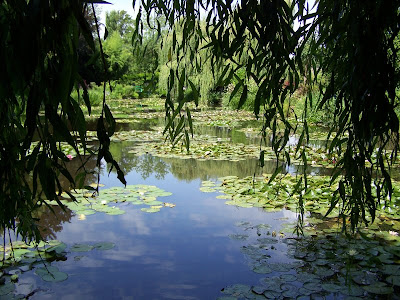 … inspired many of his paintings: 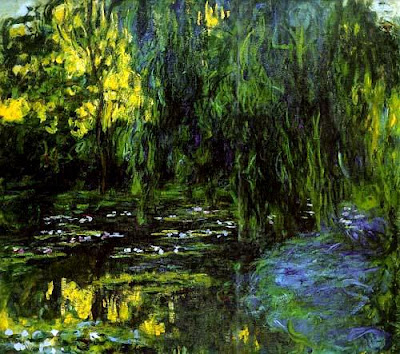 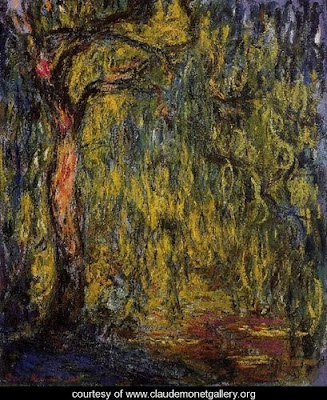 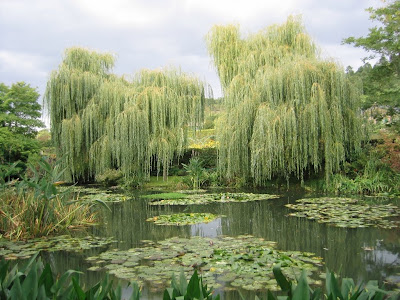 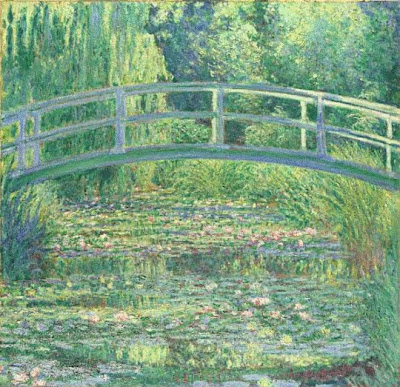 The willow tree also has medicinal properties.  According to wikipedia, “the leaves and bark of the willow tree have been mentioned in ancient texts from Assyria, Sumer and Egypt as a remedy for aches and fever, and the Ancient Greek physician Hippocrates wrote about its medicinal properties in the 5th century BC. Native Americans across the American continent relied on it as a staple of their medical treatments. This is because it contains salicylic acid, the precursor to aspirin.” 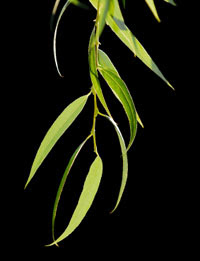 “Willow bark contains auxins (plant growth hormones), especially those used for rooting new cuttings. The bark can even be used to make a simple extract that will promote cutting growth.”  How cool is that?  I have to try it out when we have the trees.

“In English folklore, a willow tree is believed to be quite sinister, capable of uprooting itself and stalking travellers.” 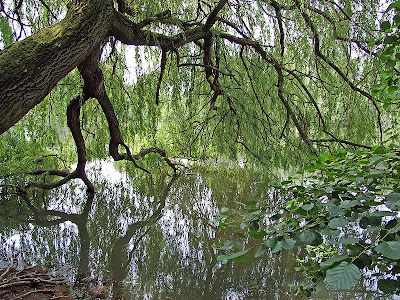 According to  this source, “Though the Weeping Willow is commonly planted in burial grounds both in China and in Turkey, its tearful symbolism has been mainly recognized in modern times, and among Christian peoples. As has been well said: “The Cypress was long considered as the appropriate ornament of the cemetery; but its gloomy shade among the tombs, and its thick, heavy foliage of the darkest green, inspire only depressing thoughts, and present death under its most appalling image, whilst the Weeping Willow, on the contrary, rather conveys a picture of the grief felt for the loss of the departed than of the darkness of the grave. Its light and elegant foliage flows like the disheveled hair and graceful drapery of a sculptured mourner over a sepulchral urn, and conveys those soothing, though melancholy reflections that made the poet write–

Photo  by Donna Hollinger
Photo by Margaret Clough
Many of the gravestones of Victorian times were adorned with willow tree carvings. (Image below from here )

Shakespeare’s Ophelia was said to be picking flowers from a willow tree when she slipped into the river & drowned.
(Paing by John William Waterhouse)

When I was a kid, I used to have a willow tree that I’d climb and hang out in for hours in my dad’s old neighborhood. It was massive and on someone else’s pre-construction land. Sadly I think the land’s been buiilt on and the tree’s been cut down since. It was so cool though, because it was such a private place for the older kids of the neighborhood to hide from younger siblings. (Sorry if you’re a younger sibling but sometimes us older ones just need to escape you! 😉 The boughs and leaves provide almost a solid wall to hide behind:
I cannot wait to plant some in our yard.  They’re pretty inexpensive and grow insanely fast:  7-10 feet a year I’ve heard/ read.  (Seriously??) 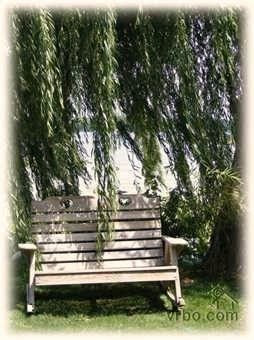 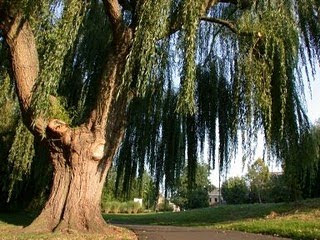 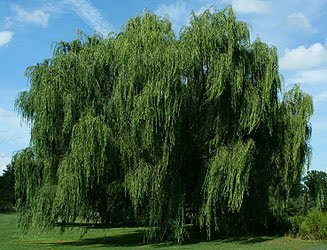 …poor Justin! 😉
We have 7 scraggly pines that need to come down, so that’s the first order of business, but I’ll let you know as soon as our willow arrive.
xoxo,
lauren
ps-  I’m under no illusions that our soggy yard will dry up when we put in the bad boys but they’ll hopefully make it a little better.  With the Springs underground we’re pretty much stuck. 🙁