If you’ve been reading my blog for a while now or follow along on Instagram, you might remember me sharing about a cousin’s house I’m designing in Florida. 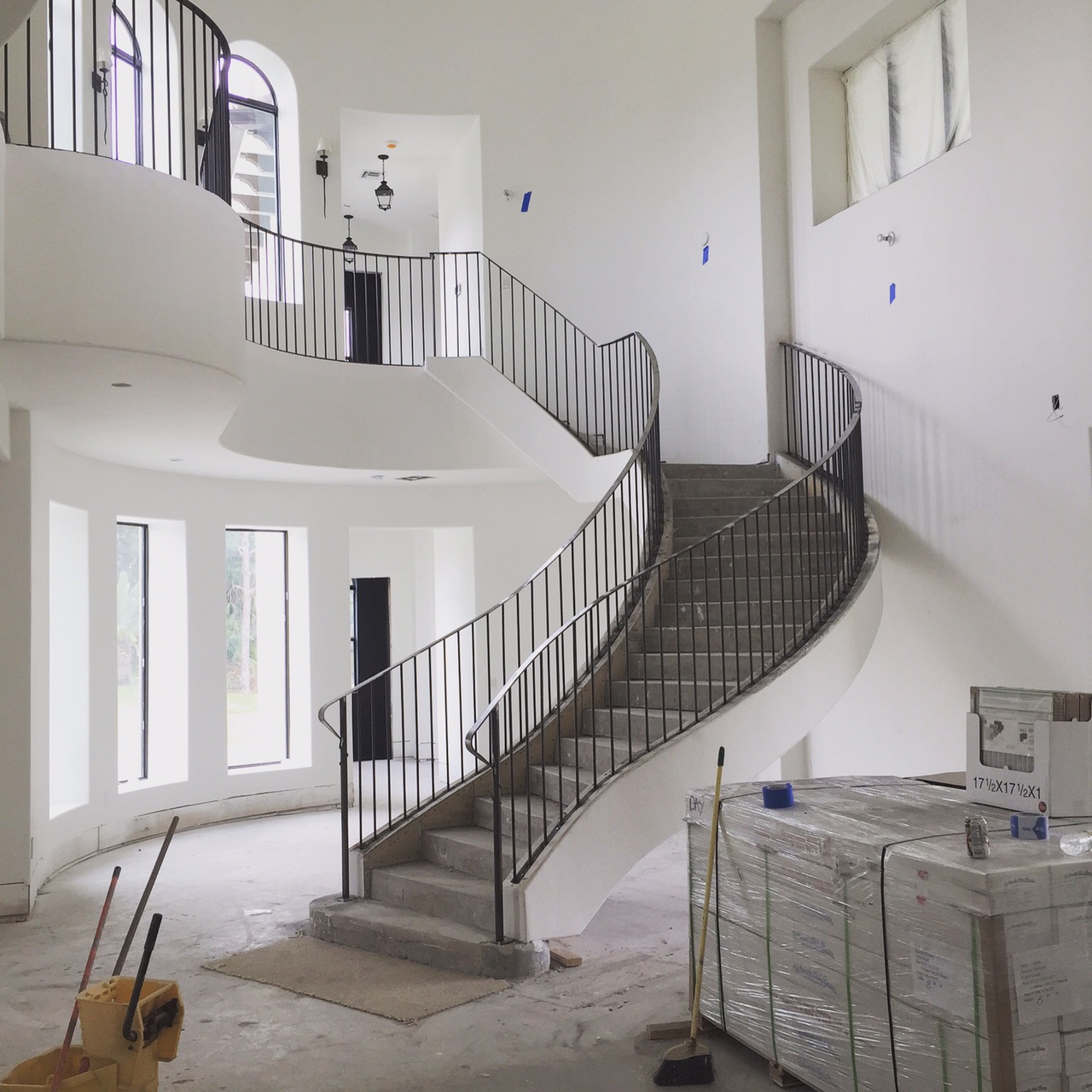 The project started about three years ago when my cousin purchased acreage and had an architect draw up plans for a (massive) home beside the property’s
existing pond and pool.  (which would entail taking down the original house)  I’ll be honest… the house design was NOT my thing.  AT
ALL.  Check it out here or see below: 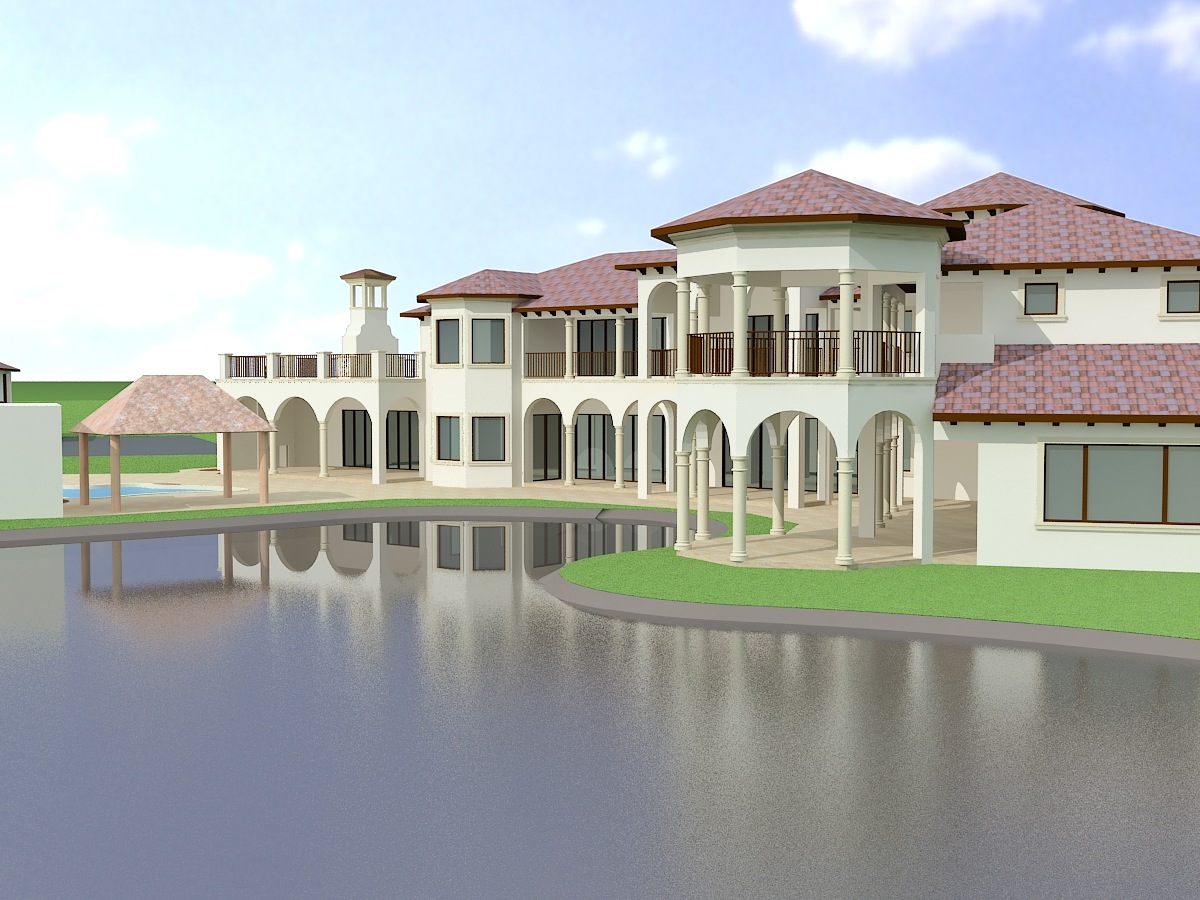 My cousin’s natural preference for opulence, curly-swirly everything, tray ceilings, excessive moldings, darkness, formal interiors, red and burgundy,
dark masculine everything (Think Louis XIV meets Kirkland’s or Touch of Class) is almost the complete opposite of the airy, natural, relaxed,
casual style I love.  Both of us agreed, though, that the house should be dramatic, we just wanted to achieve that in different ways.  I
saw the drama coming from the juxtaposition of simplicity in a space of such massive scale…  In a purity of materials and lines as seen in many
of the ancient Roman villas, which were basically very grand country homes. The property is amazing
– filled with wildlife and native plants- and you feel like you’re in another world when you visit it.  Selecting a quieter palette of aged materials
and letting textural nuances and sculptural forms create interest rather than dark heavy colors and ornate ironwork & woodwork, the way it was
originally envisioned.

The architectural plans were pretty much set in stone by the time I got my hands on them so, though I was unable to consult on the layout, exterior
of the house and general size of the house (this thing is around 17,000 square feet!) I did get to design and select many of the architectural
elements… Ceiling details (which, fortunately, my cousin & I totally saw eye to eye on!), I was able to rework the columns, do the kitchen
& bath designs, stair style and details (but not layout/ scale) and select all materials and finishes.  I was able to make some small
changes like simplifying the exterior arches by changing them into eyebrow arches with square columns, which calms it down slightly.

{My cousin is a landscape designer so I can’t wait to see it when it’s finished…  Hoping that some of the palm trees obscure the size of it
a bit!!}

Being that I saw the house as a type of villa, I immediately thought of John Saladino when I first heard about the project.  John Saladino’s work
has been a huge inspiration to me throughout the processt, as was our friends’ Brooke & Steve Giannetti’s work.  (On a sidenote, I’m in the
middle of reading their new book, Patina Farm, right
now and it is just PERFECTION!!!  I’ll be sure to post my thoughts on it when I’ve finished.)

My cousin & I are close, and as a result, I’m really vocal about my opinions with him and there is absolutely no sugar coating in our relationship.
If one of us doesn’t like something, we just say it, often while making fun of the other person’s idea.  The amazing thing is, he’s really
come to trust me over the years (I did his mountain house the summer before last) and even when he isn’t on board with something, he goes along with
it anyway and believes he’ll love it even if he doesn’t believe it at the time.

Just like with his last house, he won’t know what furniture is going in his house until it arrives.  (which is just SO exciting for me!!!!!!  I’m
like Santa Claus, except he’s paying 😉  Every now and then I like to show him peeks at things that I know will freak him out because it brings
me joy. 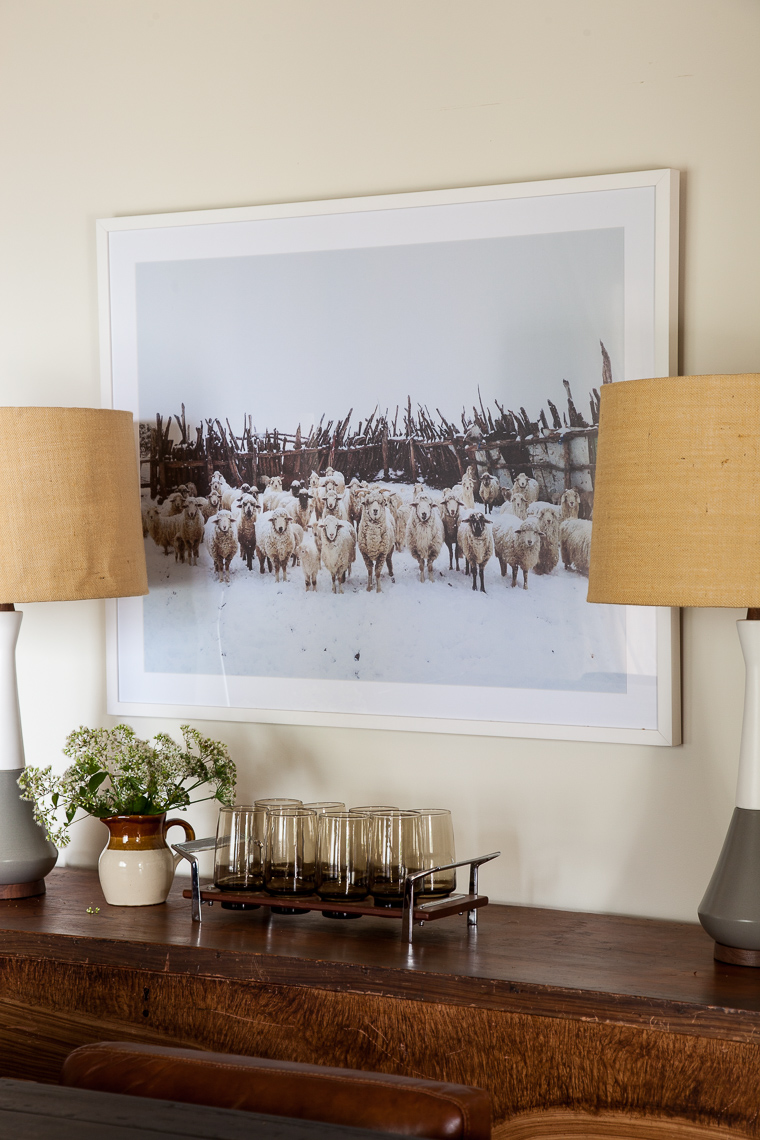 {I think my favorite reaction of his was when I told him over the phone that I had bought a photograph of a flock of sheep posing for the camera for his
dining room at the mountain house.  It’s not something I can repeat in polite company 😉 }

Over the years, he’s come around to also wanting something more simple and pure than his original vision too.  I think he gets now that casual doesn’t
mean crappy and is ready to embrace it.  He’s SUCH a casual person -often barefoot- who loves to boat, fish, wakeboard, snowboard, entertain friends,
prank friends, and play with his pets.  Board shorts and jeans are his uniform.  I honestly can’t even picture him living in the dark, red,
opulent formal creepy castle place he originally wanted.   I think it just comes down to not knowing what could be and thinking that formality
and grandeur is the only way to approach a house of this scale.  The villa is becoming a sort of rough-luxe type of hangout heaven and I’m in
the process of decorating and collecting cool things for it.

There is now a coconut grove on the property and acres of trees.  Swans have come to live in the pond and wild peacocks roam the property.  My
cousin is extremely concerned with making sure Bernie, his pet squirrel, will have a good place for his bed in the master bedroom.

White walls throughout the house play against natural limestone, antique stones from Israel, cypress and oak, creating a quiet palette of neutrals that
I’ll bring a teensy bit of color into through rugs, fabrics and art.

I thought I’d share what’s going on in the house right now.  Here’s a peek at the limestone floors that are going in as I type: 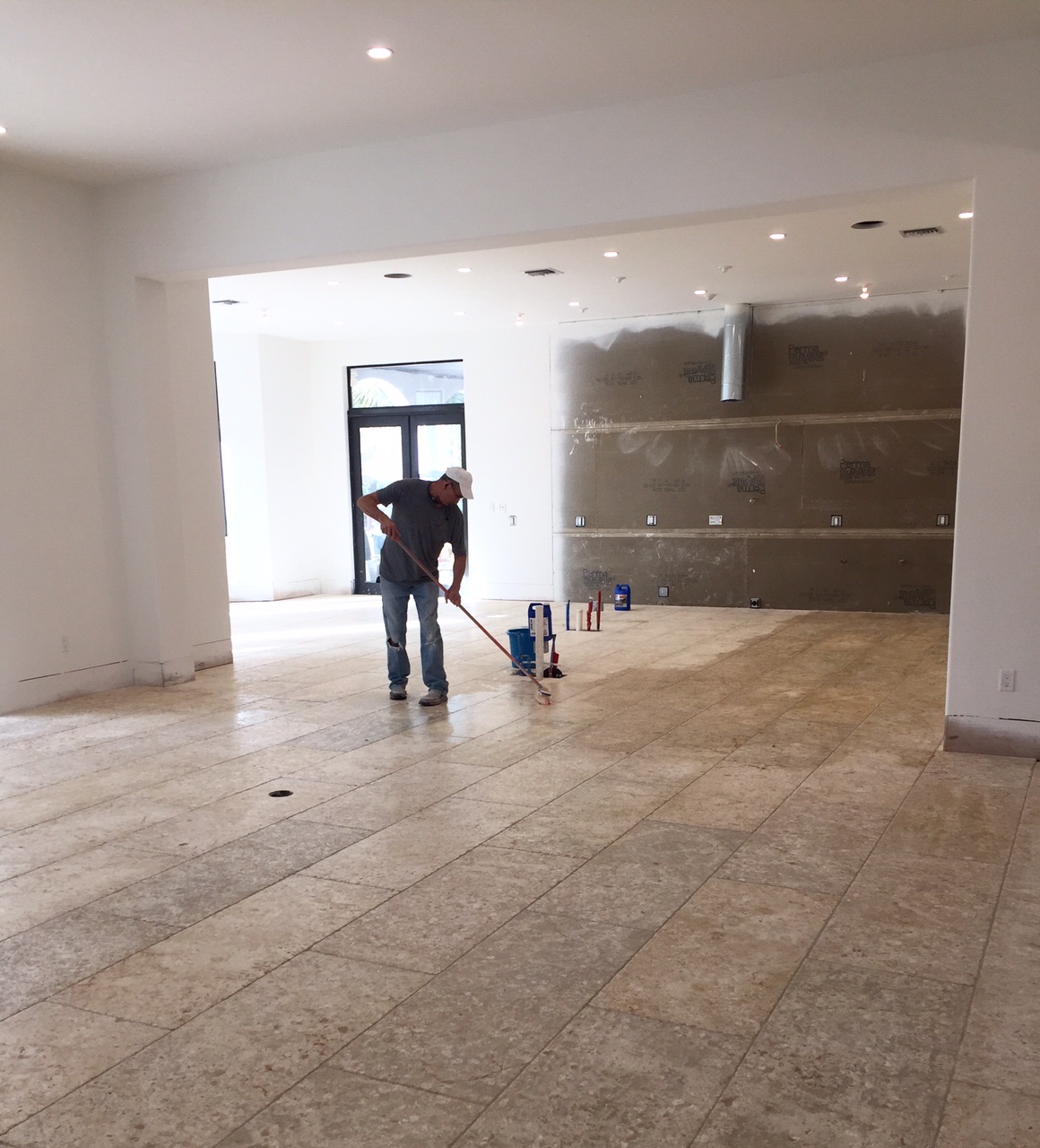 The master bath is covered in waterproof Moroccan plaster:

{Took a bit of inspiration from ancient Roman bathhouses here… The bathroom is one massive space that can get wet with an antique Italian fountain as
the bathtub.}

The family room wall completely opens to the outside, as do many of the other rooms:

And the lighting has started to arrive.  I love how it looks in the groin vaulted hallways:

I’m off for the day, but hope you enjoyed seeing the progress!  We’ll be installing this summer and I cannot wait!  I’ll be sure to pop in with
more updates along the way!!