Stainless Steel Appliance Paint… or How I Ruined My Kitchen

There will be no pretty “after” pictures in this post. I seriously ruined my kitchen today. Wanting stainless steel appliances and loathing my “bisque” fridge and dishwasher, I started researching cheaper options. I got SO excited when I read about the product, a “liquid” stainless steel! (I haven’t listed the brand because I don’t want to put a company down or cause it to lose any business, but if you really are interested in the product, you can email me and I can give you more details.) I thought: at least I should give this stuff a try for $50 before buying new appliances. Well, I bought it and here’s what I got: 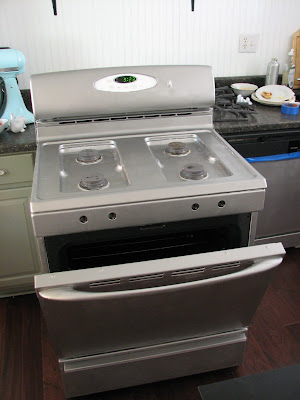 It actually looks better in the above pic than it does in person. It looks more like this: 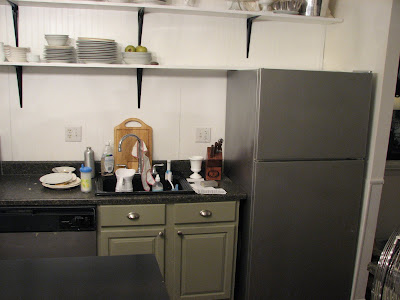 It’s really dark and looks just like what it is: painted appliances. I really fell for the photos on the website. To be fair, I’m sure they applied it much better than we did and so the appliances pictured probably look much better, but I really should have known better. I think it’s a great idea and it really might be for some people, but it’s not for me. I’m actually embarrassed of my kitchen now.
Coming home tonight (we were out waiting for it to dry) and seeing my kitchen “finished” I wanted to cry. hahha I know how stupid that sounds but it’s my favorite spot in our house and now all I see are these fake-fake-fake appliances!!!!! They used to just sort of recede… I forgot about them knowing one day we’d replace them… now they’re so in my face I can’t stand it!! (Before I thought, “it’s got to be better than bisque”.. well it’s not. at all.)
BUT, I have found a little silver lining. Even though the finish looks terrible, I’m able to envision my kitchen with stainless steel appliances and I’m not sure if that’s what I want any more. 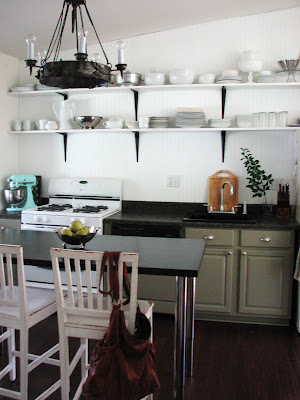 I know it’s pretty much standard in beautiful kitchens but I’m not so sure how well it will work in mine to get the feeling I’m after. I love all my white beadboard on the walls and the fridge in stainless really makes it feel smaller and interrupts the beadboard. (pic above before, when range was white.) I’m considering a new or craigslist white fridge to replace my bisque-turned-fake-stainless one… which, in the end will be much cheaper than all stainless appliances. Now I’m leaning more towards something like this:

I know “real” stainless reflects much more light than my fake painted stuff and so in that way, it will be lighter & maybe not interrupt the flow as much… but still.. white is now calling to me. After doing a little research, I’ve decided my “dream fridge” is one of these vintage reproduction fridges by Big Chill…. 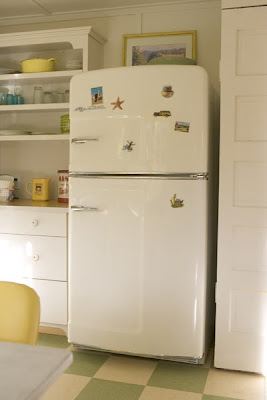 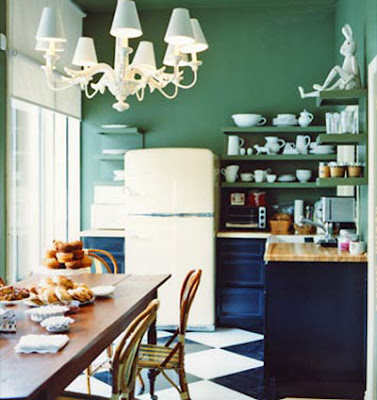 Oh my goodness how I want one…. 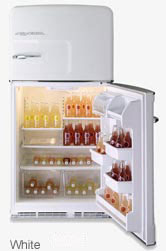 And how perfect would the matching stove be?!!! 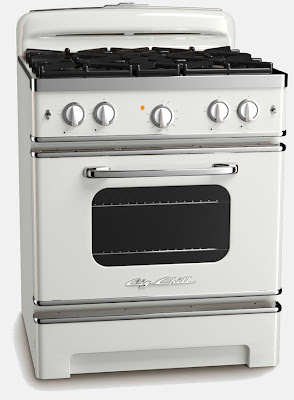 Ok, so anyone have any other ideas??? I’ve got to do something!!!! (I’m attempting to scrape off the stainless paint from the range tomorrow… the fridge isn’t worth saving..)