So Close at the Lake House!

The renovation has been moving along quickly at my dad’s lake house and we’re getting so close!!  This past weekend, Dave and I took a drive down with the boys to drop off a truckload of furniture.  We planned to stay one night but ended up staying a couple nights because of the weather/ bad driving conditions on the road. 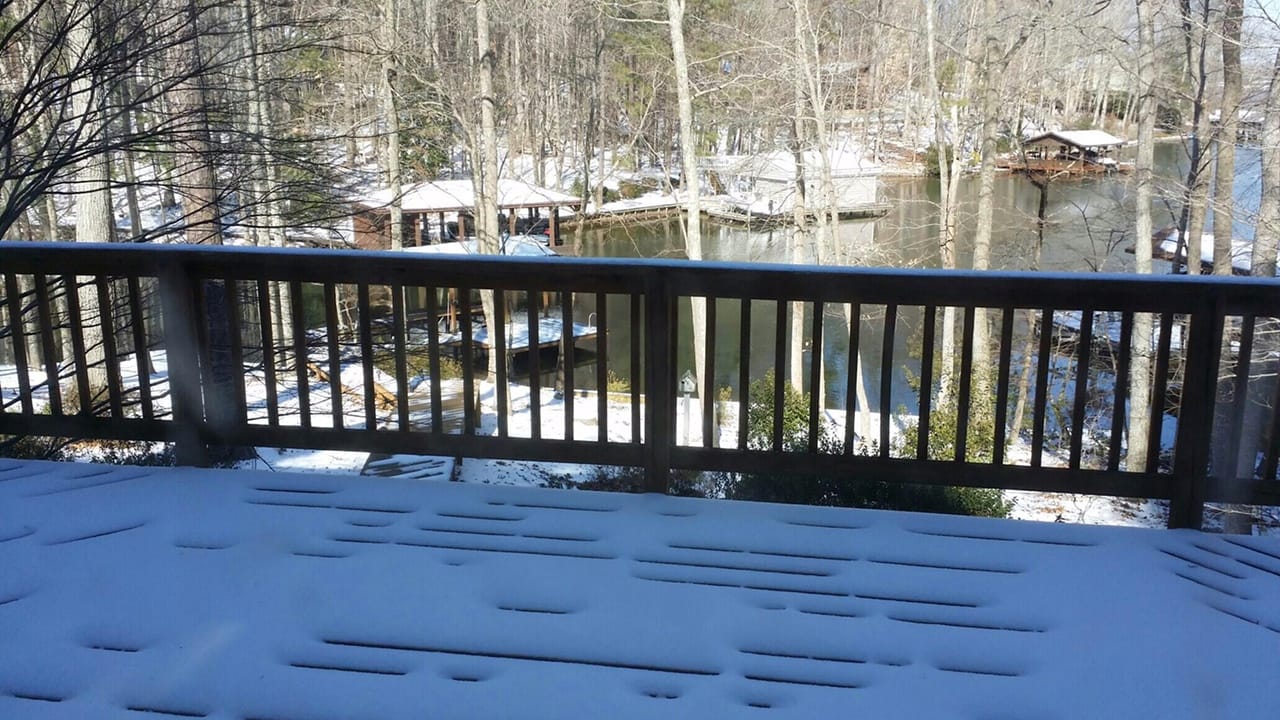 {the view off the back deck}

The pre-finished wood floors in the basement had been installed but the floors on the main levels of the house were in the process of being finished so we hunkered down in the basement.   The showers and sinks hadn’t yet been hooked up (thank goodness for a toilet upstairs!!) and baby wipes were key on this trip.  (I didn’t know this until after we were already halfway there, but oh well.)  It reminded me a lot of when we lived in our house during our construction… dusty & dirty but so exciting.  Peanut butter and butter and jellies and trash bag picnics. 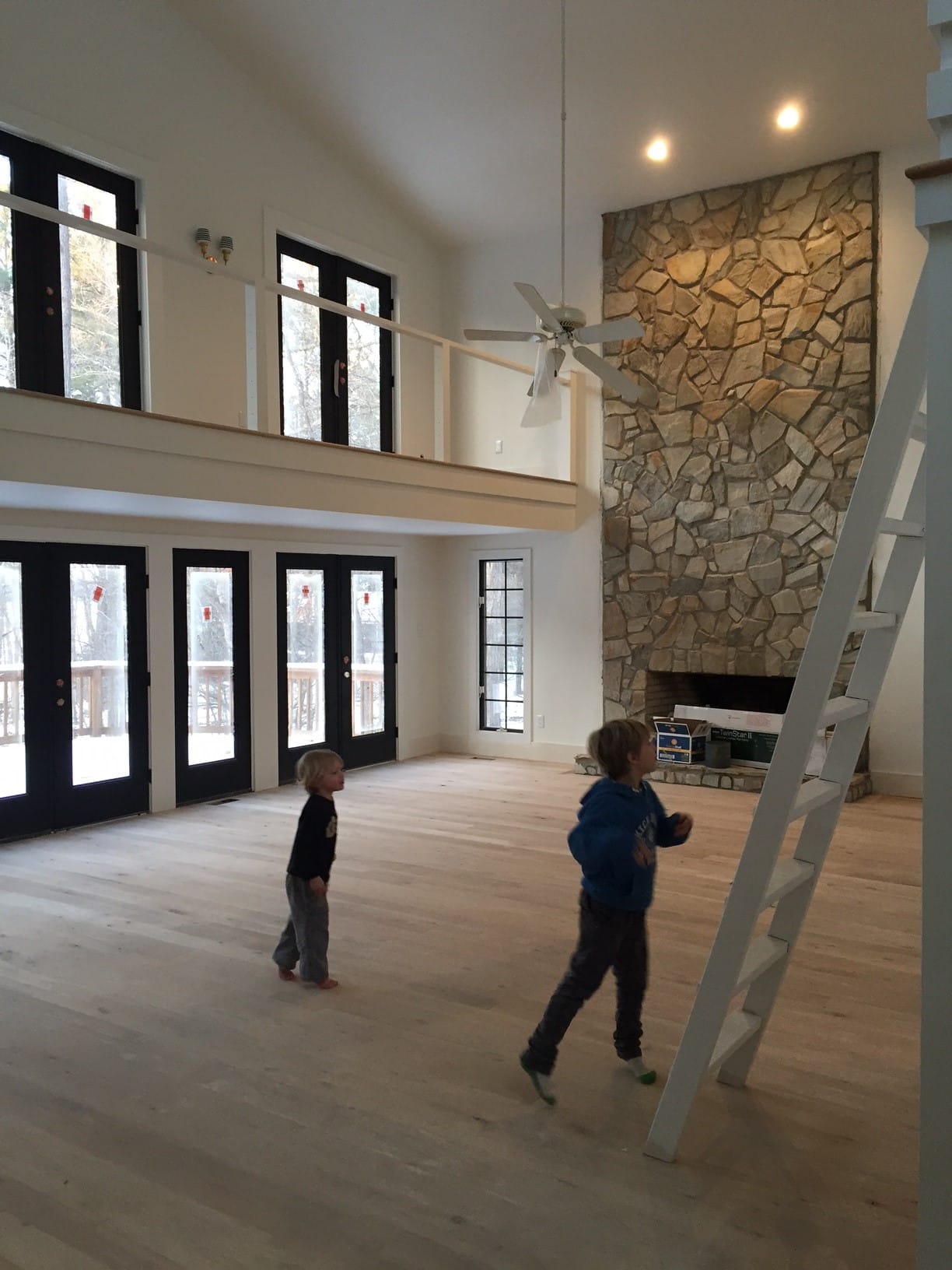 The boys slept in the new bunk room and loved it.  (They’ve never slept in bunk beds before and are ridiculously excited.)  We had them sleep on the bottom bunks because the safety rails haven’t yet been installed on the top bunks but they were still thrilled.  Louie (our two year-old) slept in our bed- horizontally, kicking us all night of course.  (I’m nearing the end of this pregnancy and am a that stage where you start to wake up in the middle of the night and can’t go back to sleep- so the toddler kicks are awesome for that. 😉

Dave was super-sweet and set up a bed for us in the basement guest bedroom- after unloading the moving truck on his own late the first night- which is turning out beautifully!!  It’s an incredibly sunny room now which is A-MAZING.  We added a wall of doors and some windows above the bed.  As much as I love one of the upstairs bedrooms, it’s so convenient to be on the same floor as the boys, and I’m guessing we’ll be in there a lot when we visit. 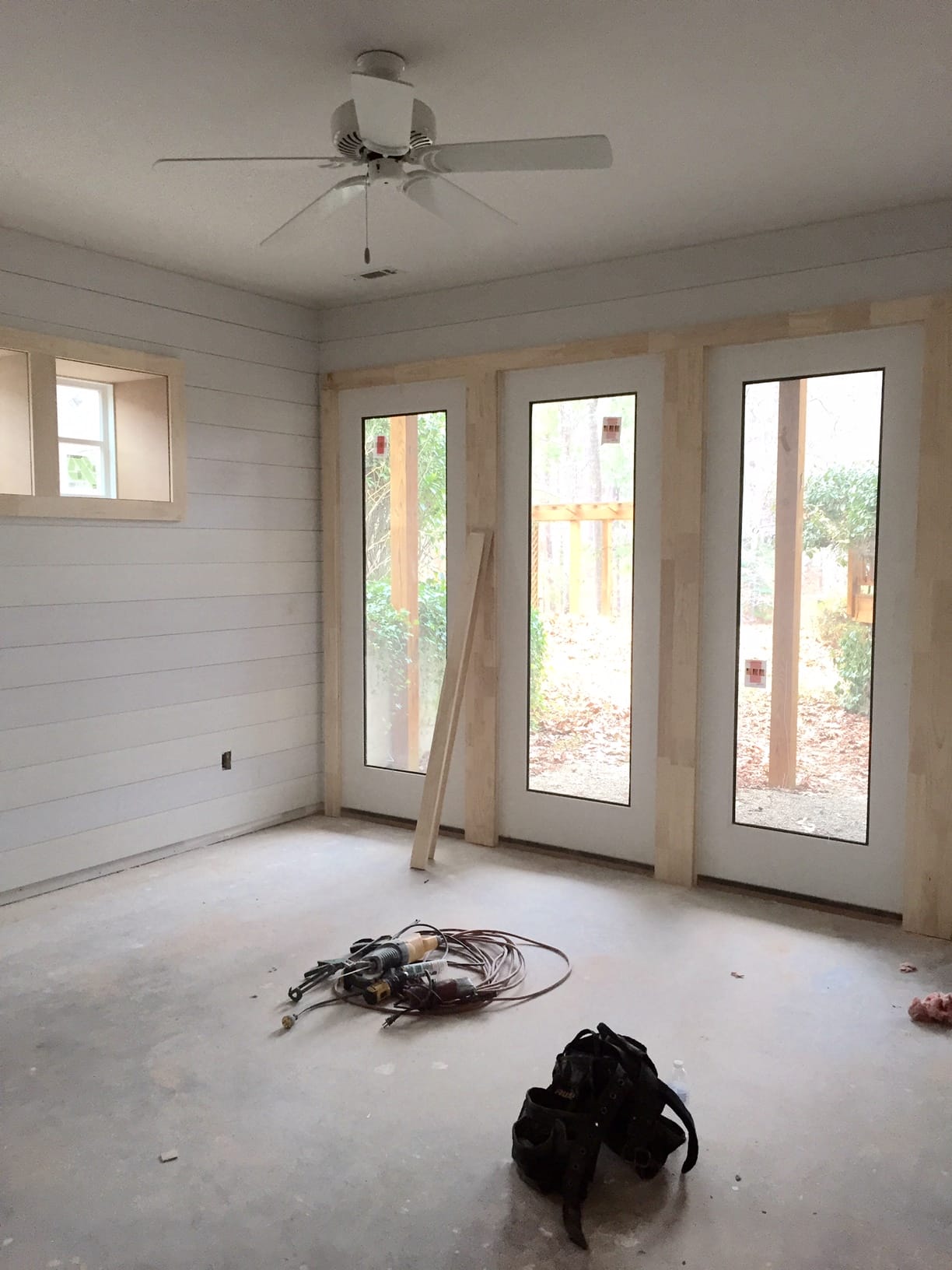 {This is an older photo… the floors have now been installed and the doors have been painted.  Our phones ran out of batteries so I didn’t get as many pics as I wanted to!}

On our second day there, we got fancy with a table & cold cuts at lunch in the boys’ room:

I attempted to finish up the most recent round of (copy) edits on the book and the boys read and played with toys we’d brought down to keep there.  They were so proud of the “Storm Trooper” suits we made out of packing material one night:

The basement, which was previously so dark, is bright and airy now.  Swapping out standard doors for eight foot doors made such a difference.  The fresh white paint really helped too. 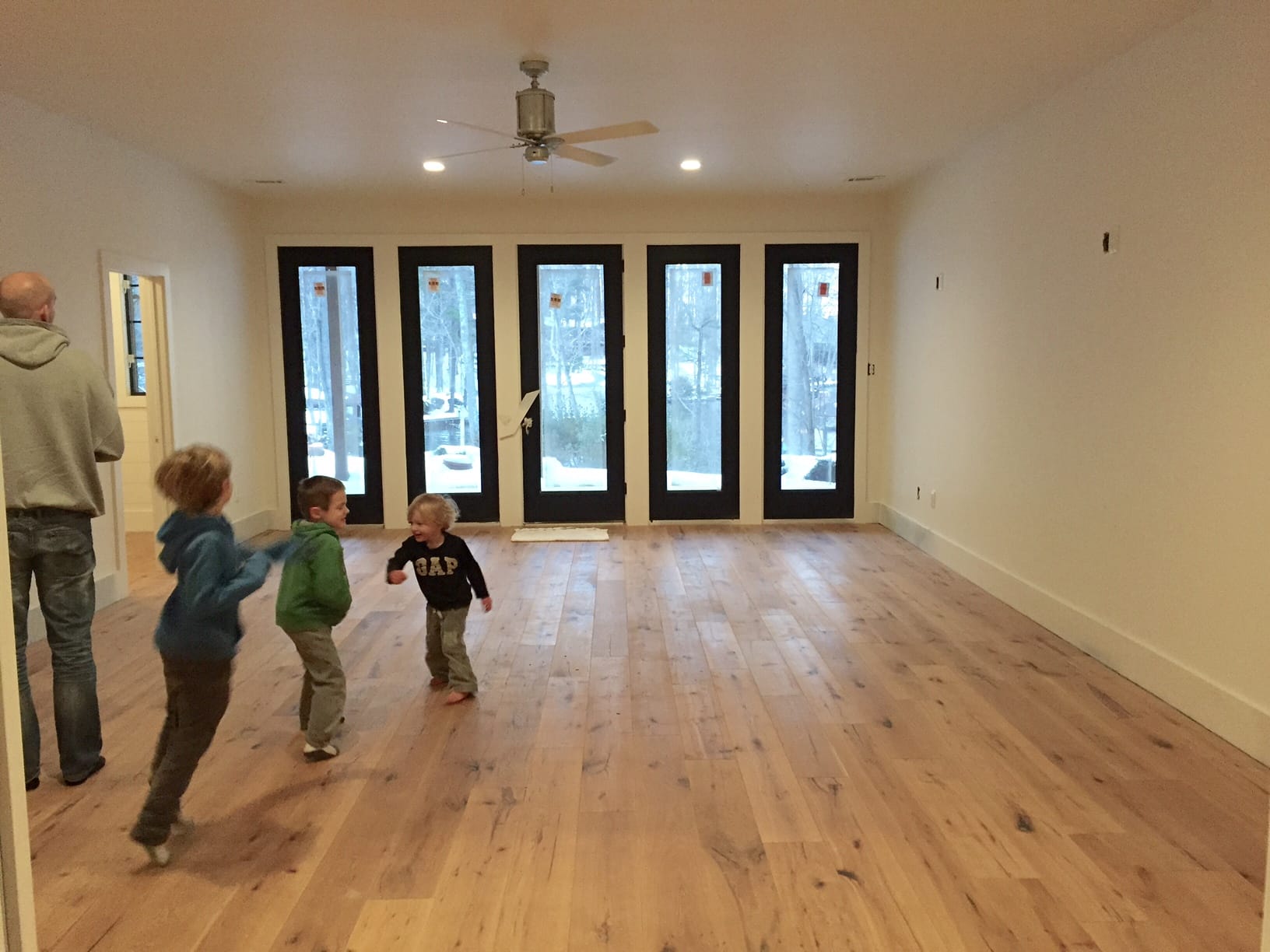 We met with our contractor, Sid Cutts of Corbitt HIlls Construction, and squared away all of the last-minute details.  Whenever I do a personal project or a project for a family member, I have to do it on the side during off-hours because we can’t afford to work it into our work schedule so there’s a lot more flying-by-the-seats-of-our-pants going on.  By this point, I’ve learned to trust in my decisions and not look back, but I have forgotten so many of the late-night decisions I’ve made on this project.  (When our contractor was asking us about where certain hardware or light fixtures went, it was hard to jog my memory…  thank goodness for our excel spreadsheet!!!) It’s all looking good though, and I’m really happy with how it’s turning out. 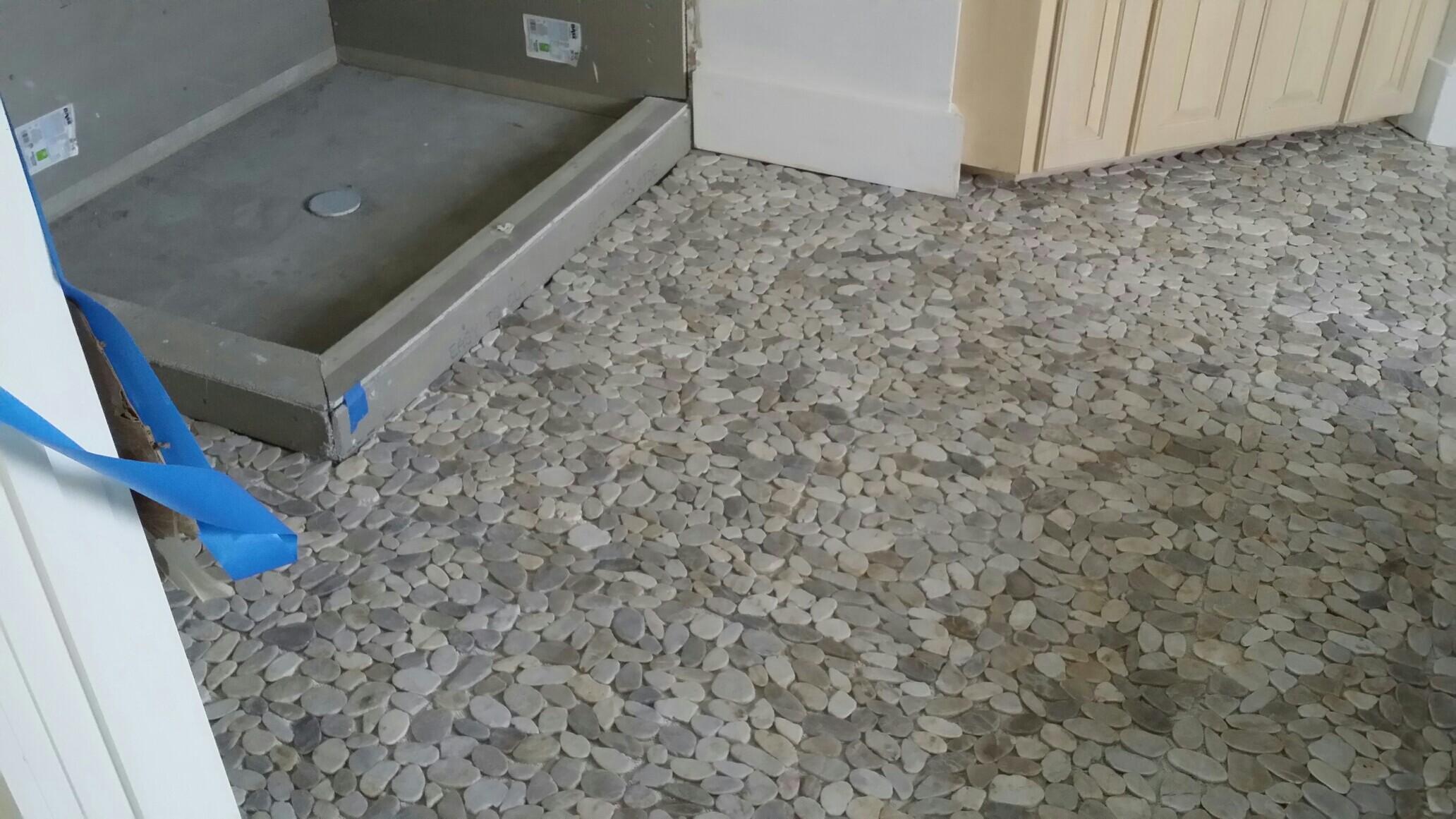 {I’m loving the river rock floors in some of the bathrooms!!} 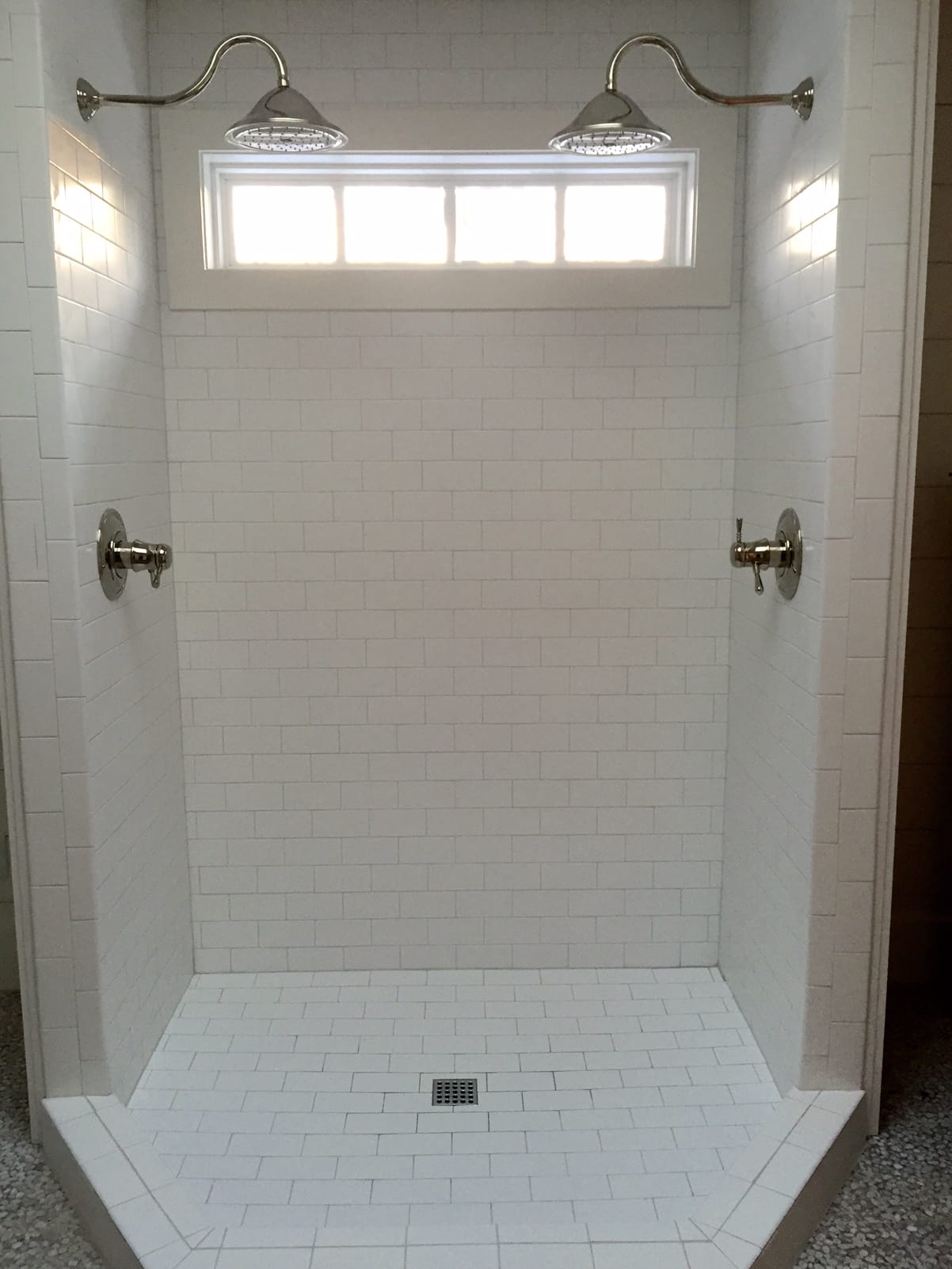 {the master bathroom on the top floor is almost finished!!!}

I had all of the doors and windows painted black to accentuate the views and add more contrast to the house.  The walls are all painted in Benjamin Moore’s Swiss Coffee, a fresh white with a little bit of depth to it.  (Except for the shiplap in my dad’s bedroom, which I had painted a deep-to-medium gray to warm it up some. ) The house is in my dad’s favorite colors- blues and grays- and if the modern touches don’t scare him, he’s going to love it.  The bluestone countertops are going in the kitchen and one of the bathrooms tomorrow.  I’m really excited to try them out as I’ve never used them on a project before.  They’re a bit rougher than most stone countertops.

After that, the kitchen will be pretty much finished!! wohoo!!!

It was fun to go visit such a cool palette and then come home to my ivory-sepia one.  The change feels so good and it makes me really appreciate both places.  (To anyone who doesn’t care about decorating… I realize how ridiculous this sounds, but it has such an effect on me and makes me really excited.)  We don’t have a ton of stuff in our house but after visiting the empty lake house all weekend and coming home, it made me want to get rid of things!!   (I’m definitely jealous of all of the storage at the lake house… something my house is lacking in.)

The crow’s nest is AWESOME. 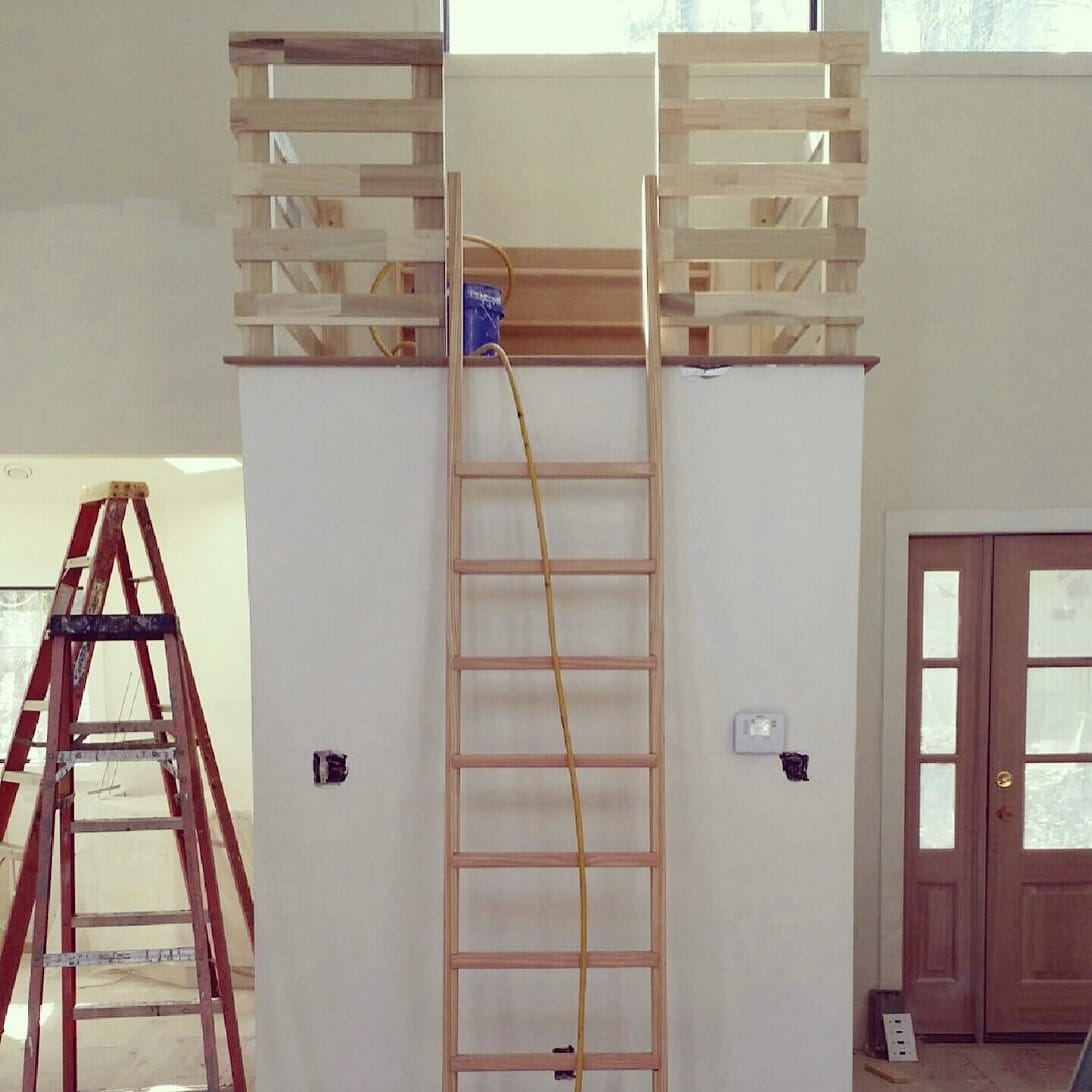 {This is a pre-painted pic from a few days ago}

We’re installing all of the furniture in a couple of weeks and shooting it for my book right afterwards.  (We only have two shoots left-including this one- until we’re done!!)  The book is going to print soon after the photos come in so I’ve had to pre-write all of the captions for the final shoots.  It’s a little crazy having to make all of the styling decisions on these two huge projects before construction has even been completed!!  I walked through the house to make sure I thought all of the art work and accessories would still work as planned and tried to perfectly envision every shot to make sure each one would be interesting enough to include in the book and that nothing was redundant.  I’ve triple-checked all of my captions for these final two projects and now, just have to pray that everything is completed exactly as planned and on time, and looks as good as I’m picturing it will.  fun stuff!!

I CANNOT WAIT for my dad to finally see his house for the FIRST time ever!!!  He’s seen pictures of the house “before,” but not much else.  (You’ve probably seen more progress photos than the has!!)  He’s really been through a lot and we have always halfway across the country from each other- my parents divorced when I was two years old and my mom moved to Virginia from Chicago- so to finally get to be this close is surreal.  We’re not sure how frequently he’ll be at the house, but I’m hoping that he’ll love being there so much that he doesn’t want to leave.   It’s still crazy to me that he hasn’t ever set foot in the house.  This past summer when he said he wanted us to help him find a place on this lake, I wasn’t sure it would actually happen, but a few weeks later, we were house hunting for him in North Carolina and he was making an offer on a place.  I still kind of can’t believe it.

Anyway, hope you enjoyed this little progress tour.  It should be one of the last!!  The next time we visit, it’ll be mostly finished.  I CANNOT WAIT FOR THIS BOOK TO COME OUT so that I can share the final “afters”!!!  (BTW- Abrams is still working on the cover and they came up with one that I’m IN LOVE with but they’re undecided on what the final cover will be so keep your fingers crossed!!)

I’ll be back soon with updates on another project I can’t wait to share with you.  Have a good one!!