So this is really happening.  Craziness!  I cannot believe it, but we’re selling our house less than a year after we moved in.  We
are putting our house on the market THIS WEEKEND & our realtor is having two open houses!!

As crazy and fast as this move will be, we are so excited!!!  Our new place couldn’t be more different than our current place (or our last place for
that matter!) and we’re thrilled to be moving to somewhere with a lot of land.  As many of you could tell, though we loved our location, all of
the space, and the convenience at this new house, it just never really sung to my soul.  I’ve tried to make it “us” in every way possible but
I never felt like it was a permanent move deep down, even when I wanted it to be so badly.

We’ve enjoyed our time here though, and I really am so thankful we did it because I think I always would have wondered “what if?”.  Here’s a peek
at our living room right now (which I need to go style IMMEDIATELY!!!):

The past few weeks have been a whirlwind as we decided to undertake all of the projects we thought we would “eventually” do while living in our house…
renovating 4 bathrooms, adding walls, removing walls, adding a laundry closet to the master suite, finishing our attic studio, installing 25+ light
fixtures, landscaping the yard, getting Sonos, adding windows seats in the bedrooms, new hardware on all of the doors, new garage doors and painting
pretty much everything in our house.  I DO NOT recommend renovating this way!!! eeeek it’s been madness.  We’ve been joking that if it doesn’t
sell, at least we’ll be done!!  (But I can’t even laugh at that because I’m too in love with the house we’re moving to!!)  We have never
gotten so much done in so little time.

{Our kitchen is ALMOST there!! Dave is installing the final light fixtures right now and I’ve got new herbs to kill up in the pots above the range!}

But photographer (and my good friend who also shot my book) Helen Norman is shooting the house tomorrow and we STILL aren’t done yet!!!  The master
bath glass shower door is being installed as I type and we’ll be up all night painting and finishing up on a million random little things.  I
haven’t even thought about how I’ll style the rooms, but we’ll just make it work tomorrow.

I’m still on the fence about which rooms we’ll be shooting because I really didn’t even get going on the decorating end of things in this house…  we’d
planned on saving & doing it gradually so the only things we purchased for this house were barstools, and a set of four chairs and rugs in our
hearth room/ kitchen.  All of the other rooms are a mishmash of our old things that don’t necessarily fit (or match! eeek!!) so I really have
to think about which rooms we’ll shoot… I’ll most likely take some cool vignettes in unfinished rooms of areas that I love and then only fully shoot
the rooms I’m fairly happy with the decorating in.  The room that I’m the saddest to leave unfinished is our library which is a deep gray-green
that completely clashes with our old green velvet sofa that’s sitting in it.  I had caramel brown leather intentions for it but now there’s no
time & no point!  🙁

I have to say that as crazy-busy as the past year has been, it’s been extremely satisfying to change a home for the better so quickly… there’s been a
lot of instant gratification to say the least.  We didn’t intend to “flip” this house when we moved in, but I guess that’s what we’re doing.  It’s
made us think a bit about flipping because we really enjoyed it… and it’s something that we’d be open to (on houses we didn’t move into from now
on though!!) but we’d want to do it the way we have in the past, which is by making really personal (sometimes not so cost-effective!) choices and
actually fully decorate the houses, so I’m not sure how that would work out and/or make sense financially.  I am REALLY nervous about what potential
buyers will think of all of the personal choices we made when we didn’t know we’d be leaving so soon in this house: the front yard vegetable garden,
painted white floors, modern touches, dark basement carpeting & walls, conversion of a bedroom into an upstairs family hangout, etc…  all
the things that we love about living here, but potentially things that buyers aren’t used to, so I know I’d be in the same boat if I were flipping
a house with similar surprising choices… nervous!!!!  It’s not anything we’d do in the next couple of years but we’ll be mulling on it for the
future.

The change in the exterior of our house has been a big one.  Here it is last year when we moved in… 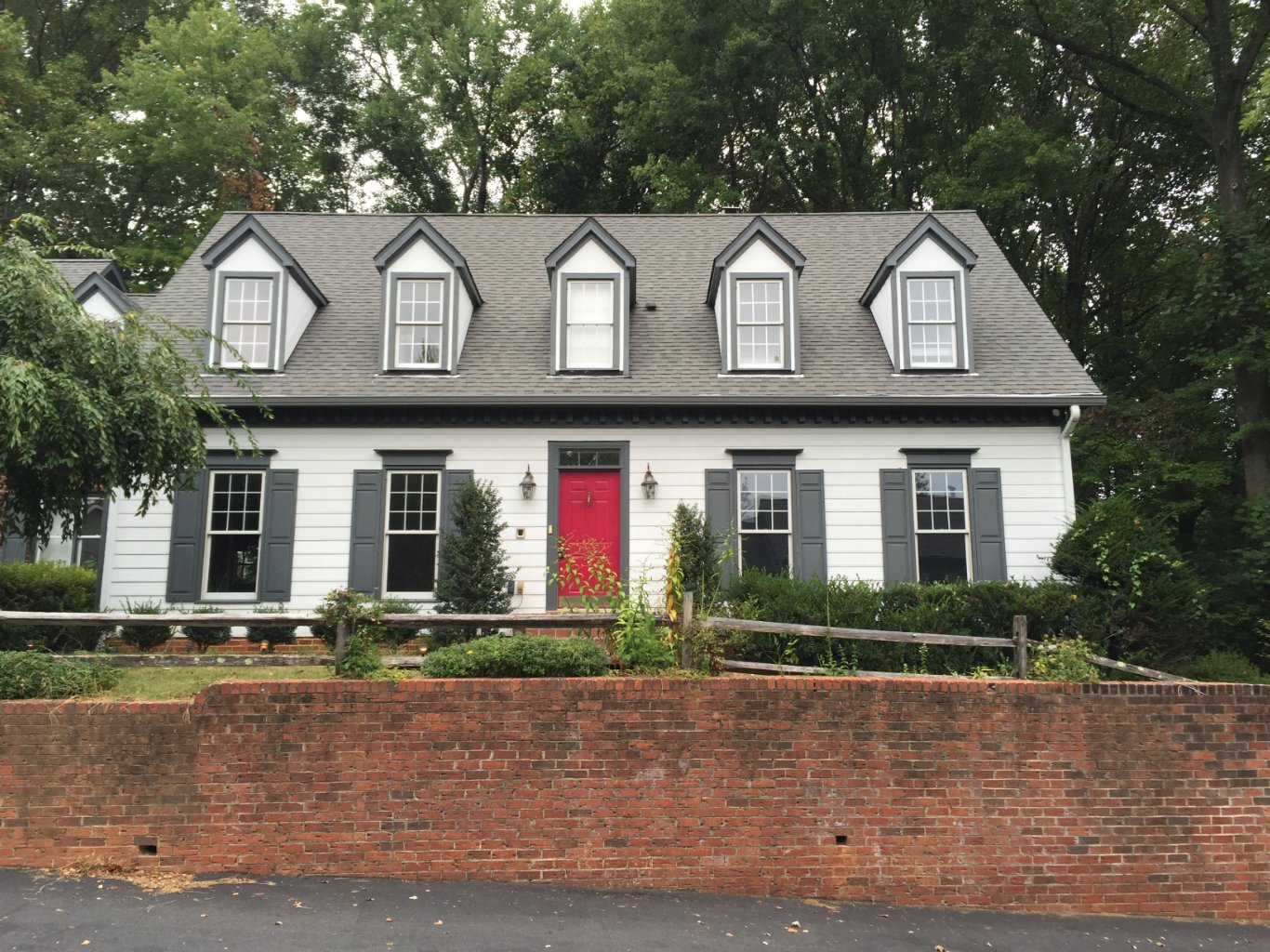 …and here it is now…

I can’t wait for Helen’s pictures tomorrow because mine doesn’t really do it justice but you get the idea.  When she gets the pics to me, I’m planning
on doing a huge before-and-after post documenting all of our changes.