The house is pretty massive, but the most important parts of it to Adam (who owns a large residential & commercial landscape design firm in Southern Florida) are the outdoor spaces.  These 3-D drawings don’t show any of the insanely beautiful landscaping that’s already in place & that will be there once we’re finished.  In the image above Adam built a huge rock wall with waterfalls flowing down it instead of the one-level ending of the pond you see here.

When we visited the Keys last week, we flew in & out through Miami and our resort stay was a day short of our flight day so we stopped in to see my family who lives near Miami on our way home so we could make out early morning flight.  My Aunt Linda lives there & my three older cousins (Tracy, Adam & Chris) are spread throughout Florida- one on the Gulf (Chris- near my in-laws’ home!) one near Orlando (Tracy) and the other cousin (Adam) right near my Aunt Linda.  Adam recently purchased an 8-acre property that he’ll be building his dream home on & I’m helping him do it.  I came into the project once Adam & the architect had decided on this: 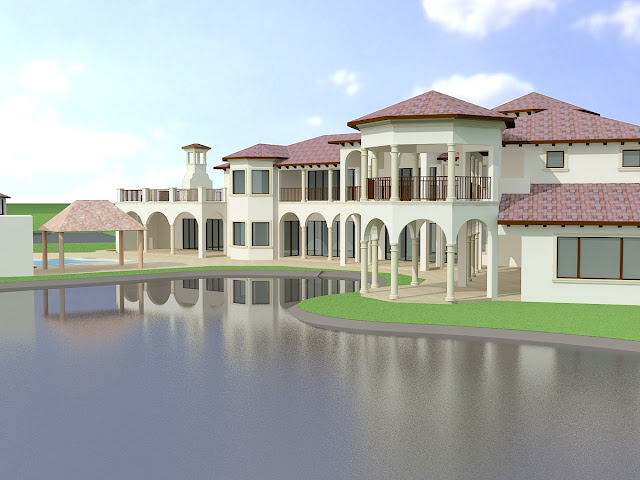 My cousin took us for a nighttime tour of the property in the golf cart on steroids: 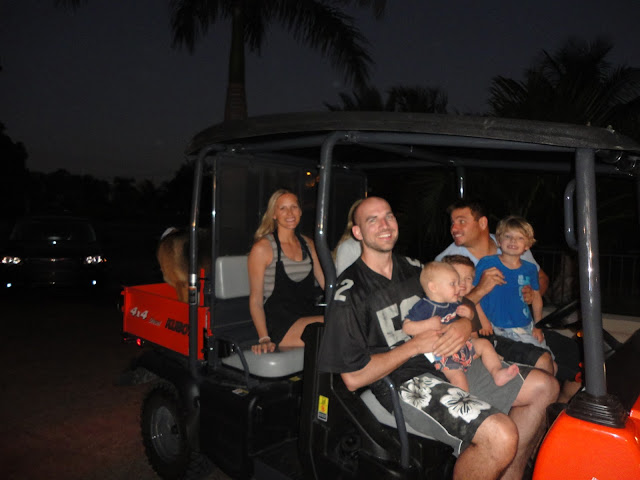 (It’s not the best picture because Adam’s girlfriend, Nicki, who’s sitting next to me, is completely hidden, but it’s all I’ve got.  Adam’s in the driver seat holding Christian, who drove.  Don’t worry, the baby didn’t come along, he posed for the pic 😉
Before we get onto the house, I need to describe my cousin, Adam, to you…  His mom (my Aunt Linda) is my dad’s sister and although his last name isn’t Maestranzi, (he’s got his dad’s last name not his mom’s maiden name)  he’s very “Maestranzi”— energetic, tireless, creative, hard-working, fun-loving, business-minded, generous and crazy.  He’s so good to his nieces & nephews and loves kids (and they love him) in general. Adam’s also all over the place and thinks and talks a mile a minute.  If you hang out with him for more than 15 minutes, you will have been on some sort of adventure.  (And I’m not kidding here…  Adam is the type that just swoops people away and takes them somewhere or shows them something crazy…  Some of my adventures with him included a random roadtrip up a mountain in Costa Rica which ended with a blown tire from his insane driving, timing a couple mile long jog he took in the middle of the night because his best friend bet he couldn’t run that far & ended with a police officer stopping us asking what as going on…  Trips to the Florida Everglades getting dangerously close to alligators and so much more.)  He started his current business when he was 12 years old and he used to mow his neighbors’ lawns.  When he went to college for business, he kept the business open and it’s now a huge company with both residential & commercial clients and he has kept his ten original clients.  He dreams big and lives bigger (and faster.)  I’m hoping that when we’re finished with the house, he might settle & slow down a little but I really doubt it because he wouldn’t be him if he did.
Anyway, back to the house…
The pool area is already Heaven: 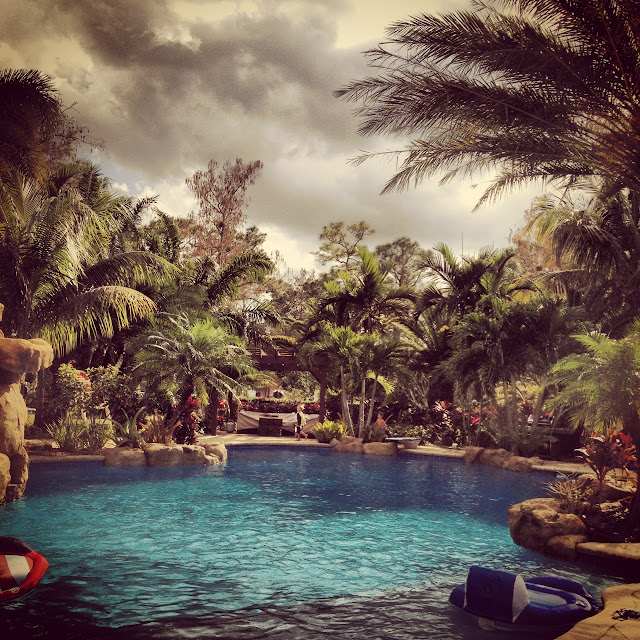 There are tiki huts and a slide & it’s like a kids’ fun land.
It feels like this a jungle… 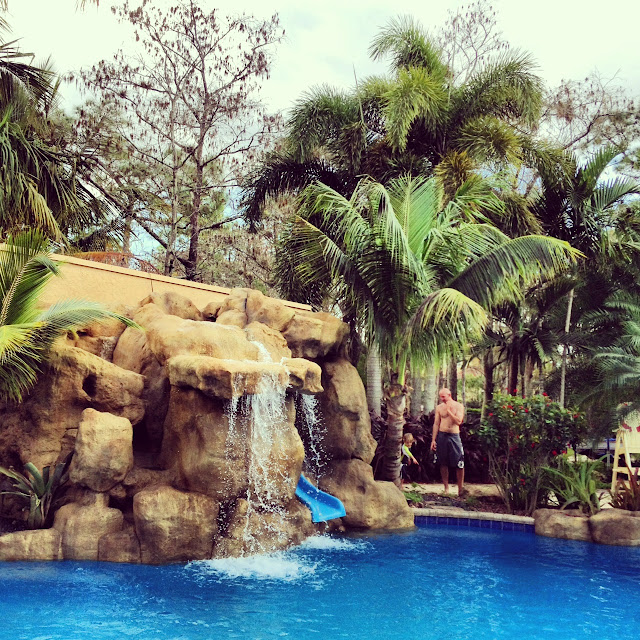 …So the whole house is focused on this backyard playland.  But, as you might remember, I’m a fiend for sunlight…  Natural light is the single most important element to me in houses.  It’s the reason I fell in love with both my new house and my old house.  So… this house plan scares me. (It’s actually keeping my from sleeping well to be honest.)  I’m also a big fan of simplicity.  My cousin is not (yet 😉 😉
We’ve been talking a lot about how I’m worried about how dark the house will be & how it needs to be simplified & cleaned up a little.  I want all of the “bravado” to be removed from the house plans if that makes any sense.  (BTW, I’m being this frank with you about this project because the client is my cousin & I think I can get away with it 😉
The architect will be making a few changes to lighten it up slightly.   (  :/  )
In the drawing below, you can see that there’s a ten foot overhang along the entire back of the house…  In front of the family room , the living room, upstairs bedrooms including the master, and most of the kitchen.  (It makes me sick writing that haha.)  Adam spends most of his time outside and entertains all the time for friends.  He’s setting this house up as the ultimate bachelor pad that will hopefully one day also work for a family.
At my nudging, the columns will now be square, stucco and clean instead of round & decorative.  The arches will be gentler and we’re removing some of the columns so that the arches will now be more “eyebrow” shaped instead of semi-circle.  Removing some of the columns will lighten it up a little so I’m glad for that, but still worried.  The bay window glass (toward the left side) will now be extended completely to the corners (this is in the kitchen) to maximize the sunlight in the single uncovered window in the entire back of the house.

It’s not everything I wanted (I was really gunning for a removal of the overhang at least in front of the kitchen/ family room but of course that kind of changes EVERYTHING including the roof line & the pleasing look on the exterior and we’re trying to get the plans approved asap…  I should’ve been brought in sooner!! argg)

Letting that one go, let’s move on to the interiors.  I’ve gotten every Corinthian column inside to be turned into simple square columns.  The house will be Mediterranean in feeling and I’m opening up Adam to the idea of “less is more.”  (Which is sort of a foreign concept to my cousin…  Somehow he has THE BEST taste & ideas in landscaping & outdoor spaces but inside, I swear he’s got Kirkland’s on his speed dial.)  He normally loves anything “Tuscan” which I’ve dubbed in our offices as “Fauxscan” and he’s also drawn to very dark, formal, opulent spaces- burgundies & golds and TASSLES and curls & swirls. (sooooo not me.) 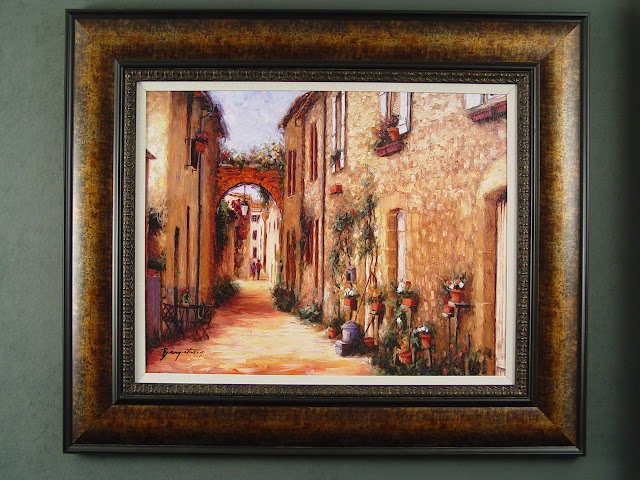 (We don’t live in Tuscany!! Putting up palm tree prints or street scene artwork with really terrible painted metallic frames is NEVER going to change that!!  Neither will lots of scrolly iron & dark wood furniture.  I can say this because at one time, I too, was into Fauxscan…  and it was bad.)

BUT-  Adam is really open to the idea of simplifying the house and going for more of a “rough luxe” feel…  In all honesty, even though he’s been loving Fauxscan for so long, my cousin is turning into one of my most receptive clients ever.  He will initially say “No, I hate that,” when I propose something outside of his comfort zone, but then he listens to why I think something should be and he usually comes around.

He really wants to bring stone and/or brickwork into the kitchen & I love this idea…  I think he was originally envisioning it as more of a dark Tudor-esque kitchen, but he’s coming around to lightening things up a bit.  I love this type of stonework- seen in an Italian villa (below)& am envisioning it on the two main kitchen walls- as backsplash & above the cabinets… 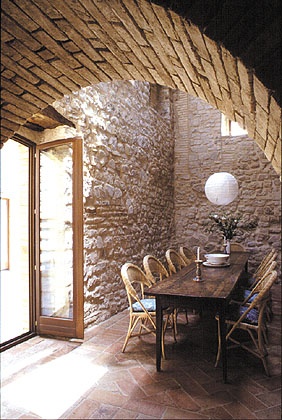 Here’s more beautiful stonework in a kitchen as I envision it: 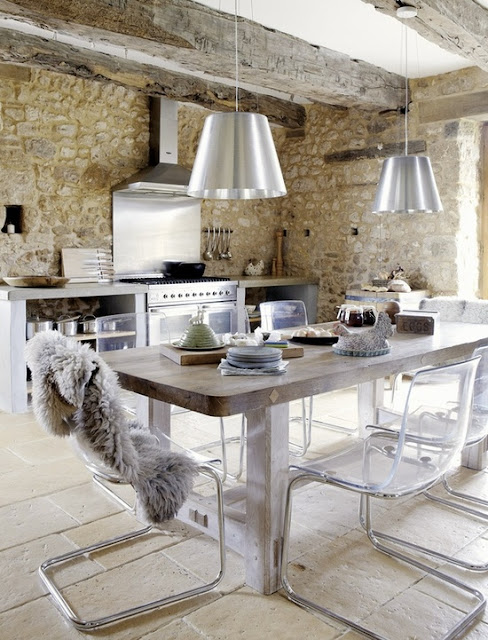 Although I love it, the look above is too modern & primitive for Adam but the floors are similar to the limestone ones we’re going with and the walls are spot on.
While in Florida, I met with the kitchen cabinet maker & the designer/artist they work with to create the preliminary hand-drawn rendering of how the kitchen will look.  He is an insanely talented artist and can draw beautiful things in two seconds.  What I’m asking for, however, is very different from the normal kitchens they do which tend to be more formal and more decorative, so it’s been a challenging process.  I worked on the kitchen plan before we met together and knew almost exactly what we wanted,  but because we’re so different, aesthetically, I think they’re having a bit of a tough time giving us what I’ve asked for.  (And I know how it feels to have to create a design that goes against what you believe in and it’s not easy to do so I can only imagine what I PAIN I am to them.  haha)
So, I’ll share with you the very first rendering of the kitchen: 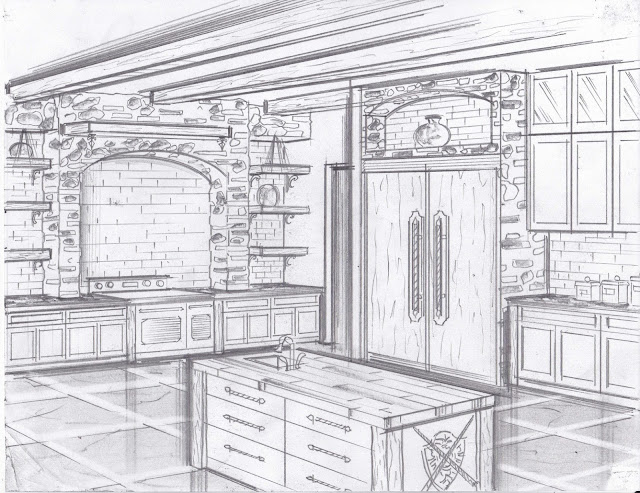 I was honestly shocked when I saw a Medieval coat of arms on the island and at all of the twisted iron detailing, the drawbridge shelving and the castle doors on the fridge.  I guess someone had said “Medieval” at the meeting and so this happened.  The artist/designer is very accommodating, however, and has been amazing with giving me lots of revisions and the drawing you see below is almost exactly what I’d originally specified, except we will be going with 1 type of stone everywhere (behind the shelves too) and also where you see brickwork so that the hood doesn’t jump out so much: 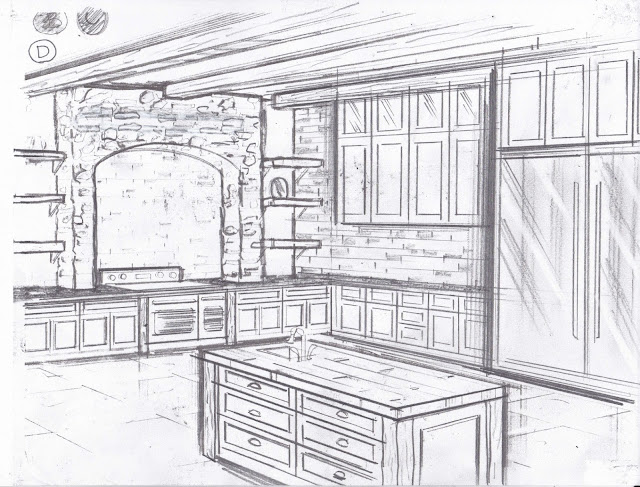 I’m not sure that this is the final plan for the kitchen but it is where I’d intended to start from in the first place.    Adam loves the stone fireplace exhaust above the range and it was his main stipulation.  I’m intrigued but don’t know how I feel about it yet.  It’s good to have this drawing to mull over.  The cabinets you see here will be in a washed cream and a second island (not shown here) will be in a darker stained pecky cypress.  To give you an idea of scale, the ceilings are twelve (!!) feet high.  It’s a little bigger than I find comfortable to be honest but I know it will help with the sunlight situation because the sliders are also very tall.
I’m envisioning it all in a lighter crumbly stone like this one:

I think the drawing still feels a bit over the top to me but that in reality with all one stone, the hood will blend a bit more and might not feel so overpowering.  (Overpowering is what my cousin wants BTW.)
The designer/artist also sent me this drawing last night, which is his own interpretation on Adam’s stone fireplace exhaust, which I’m also very intrigued by: 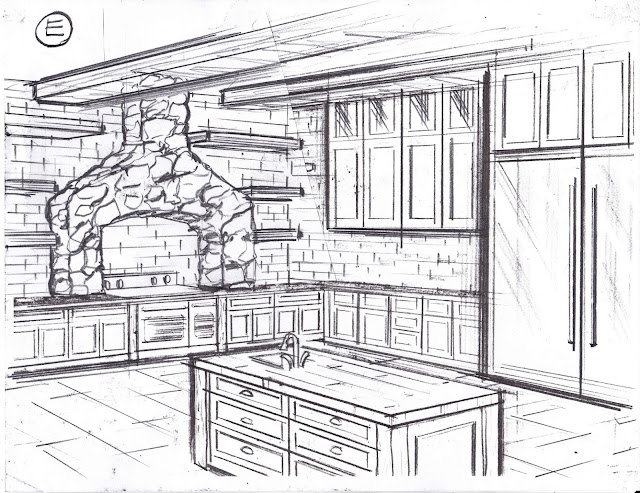 It seems softened a bit and I like that.  I think I’d like to see the vertical portion of the chimney be widened a bit so Adam is getting a tadm ore of what he wants, but this feels a little humbler to me somehow, and I’m excited about that.  What do you think?  I haven’t shown any of these new revisions to Adam yet (and he doesn’t read my blog 😉 but when I get down to my final choice, I’ll be showing him.
I have to run for the day, so I’ll share more about the project another day but would love your thoughts on the range hood as we;re finalizing today!!  And also- if you have any other thought of how to maximize light with exterior changes… would love to know.  Anyone know of anything like a glass roof that you could walk on safely that we could maybe put over the family room overhang without frying the people under it?