Because I’m due with our 4th this Spring, we did a lot of thinking about our house when we first found out.  Our bedroom is on the first floor and our boys’ bedrooms are on the second floor, but we knew that walking up and down the stairs multiple times a night for the new baby just wasn’t going to work.

We thought about doing an addition that would add bedrooms & bathrooms above our garage, existing, family room, and new lower level mudroom/conservatory so that we could be on the same floor as the kids and of course gain more bedroom/ closet space.  (Their current bedrooms are approx 9×10 & 9×12 and there will be 2 kids in each room.  Works for now, but when their clothes are man-sized, it’s gong to be a challenge.)   I also did a smaller plan that would add only 1 bedroom & bathroom above the garage. (Our house is currently around 2300 square feet btw.) We were totally on the fence and our (very patient) builder quoted it all out for us.  The smaller addition wasn’t much less than the larger one, and in the end, we decided we couldn’t justify spending the amount of money on our house because we don’t know if it’s permanent.  (It hurts to type that!!!)

When we first moved to our new place, we’d planned to send our boys to the nearby Catholic high school when they were old enough but found out this past year that it might be moving 40 minutes away from us.  (SO bummed.) Supposedly the final decision will come this year, but at this point, we don’t know.  If the high school stays and we decide to stay for the long-run, an addition is a strong possibility, but we just can’t make that kind of decision right now, especially when all sources are pretty much pointing to the high school moving away.

When we realized how much an addition would cost, we behan perusing real estate listings that would be close to a Catholic school “just for fun.”  We checked out a few places online and in person, and -if you’re familiar with Northern Virginia at all you’ll know this- are having trouble justifying paying so much money for places we don’t even like.  But randomly one weekend I found a listing for a gorgeous old saltbox in Great Falls a few miles down the road from our studio (on a few acres!!) that had been gutted and was in the process of being redone inside.  Over our budget but a possibility…  We met with the builder and timing seemed perfect… we’d shown up the day before he was ripping out beautiful old beams in the kitchen and he would let us create whatever floorplan we wanted & pick out every single little thing.  (I was in Heaven!!!)  This place was amazing.  I reworked the floorplan and reviewed the plans with the builder who was so nice.  But of course, when everything that needed to be done to the house was factored in, and when reality set in for us, we just knew we shouldn’t make the move financially.  I really liked the house – and the land- but I wasn’t as in love with it as I am with our place.  I could picture an A-mazing home and life there- complete with kitchen garden just outside the back door- but the style didn’t feel quite right for us.  I came home from our meeting at the house and as we were crunching numbers, I just looked around our house and realized that as excited as I was about the new house, I didn’t love its feeling as much as our house’s…  it would have been classic and natural and relaxed, but it didn’t have any bits of modern or fun.  I need my walls of glass and the openness that only a more modern place has.  (And of course, the saltbox would cost a lot more, which I guess is fairly important when it comes to things like college tuition and retirement 😉 😉    We’d decided we’d sit tight for a while and keep our eyes peeled.

We’re constantly looking at properties and houses for sale in the area, but we decided we won’t do a thing until we know what the high school situation is for our boys.  A couple of months later, I found a crazy house in Leesburg- I LOVE IT!!!!- near the site that the high school has plans to move to.  We checked out the house during rush hour, though, and realized it just wouldn’t work for us because the commute to work/ the city would be too long.  It’s an old stone schoolhouse with additions- from the 50s- added onto either side.  The views are STUNNING and the house is huge and of  course needs to be gutted and redone- a plus!- and the price is awesome so there’d be room for all of the renovations- both interior and exterior.  Check out the views out the back of the house:

I seriously LOVE this place and of course, began reworking the floorplans immediately.  (Floorplans honestly keep me up at night.  They’re a like a big puzzle and I can’t rest until I’ve figured them out perfectly.   It’s not even something I really enjoy doing but more like someone set me in front of a big equation I just can’t help but doing.  I have issues.  I know… )

The stone is gorgeous but I’d want to rework the entire exterior: 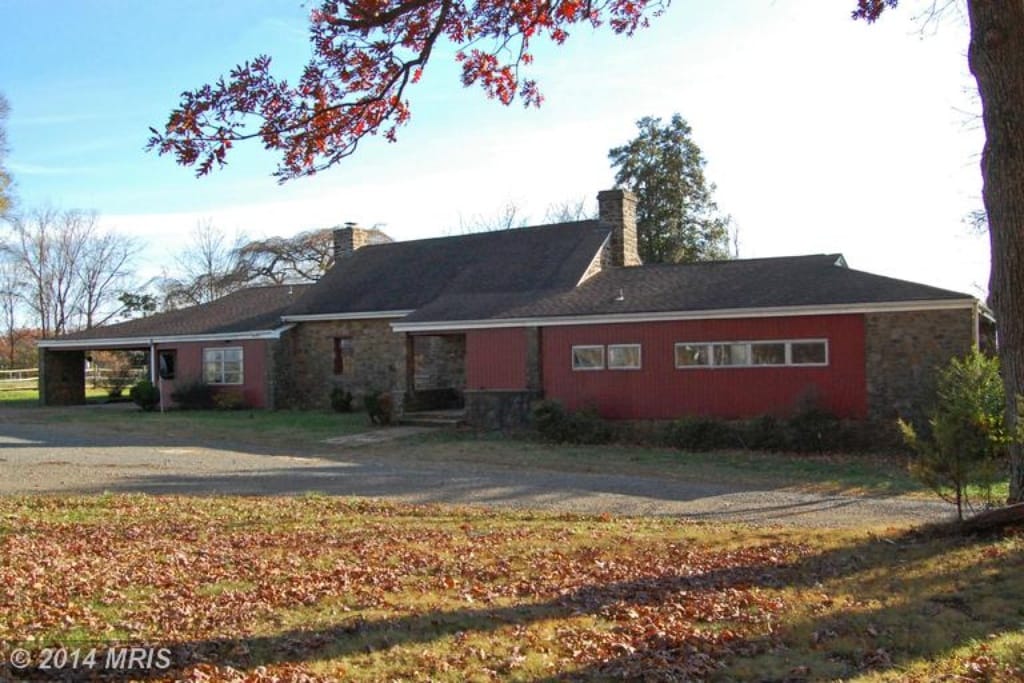 I love that is used to be a school.  The road is names after it!!  But for us, it’s just too far away from where we need to be.

And since I’ve been sharing some of my favorite finds with you, I may as well show you the one I’ve been drooling over for months that is nowhere near our budget.  I like to look at it every month or so…  Waiting for it to drop a couple million 😉 😉 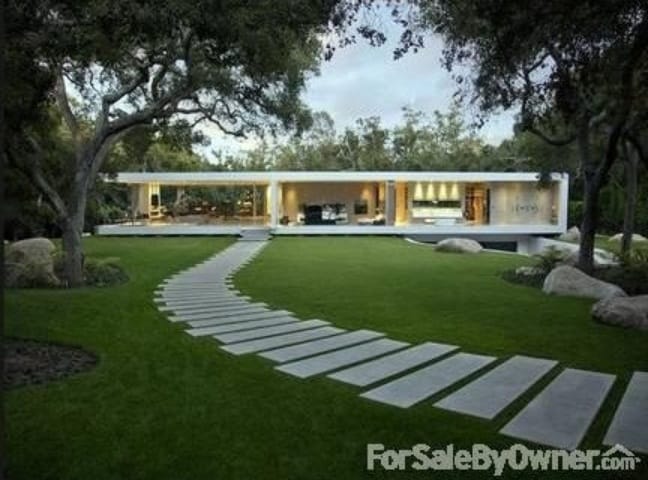 I ADORE this glass house (though sadly would want to change many of the interior finishes because I’d need more warmth & patina, so even if it were remotely in our price range, it would be wrong to redo something so good just because it’s not my style.). 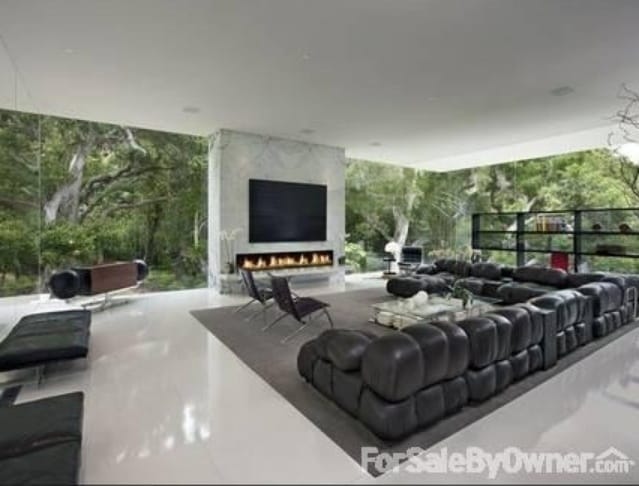 Seriously, one day, I’d love to have pure glass walls…. 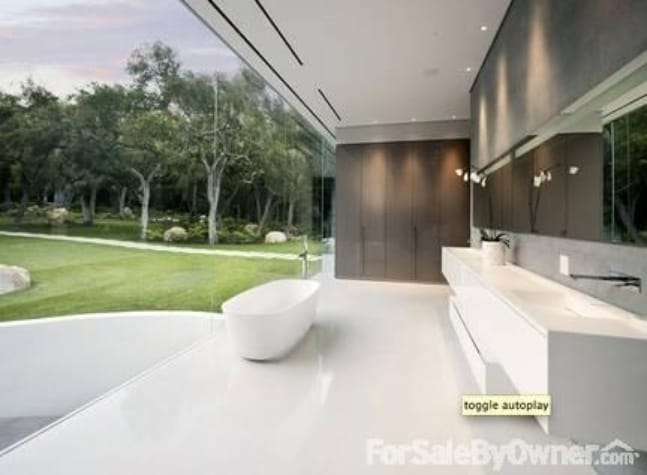 How amazing is this shower?!!!  (I hope the neighbors are faaaar away.)… 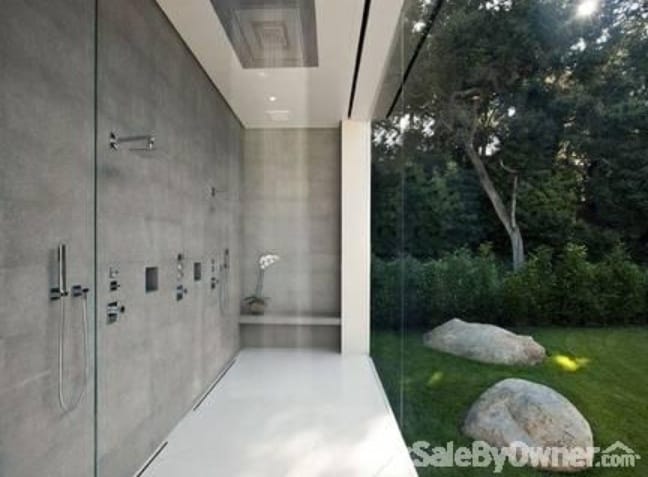 But anyway…  after our whirlwind of running through other possibilities, we’ve come right back to where we’d started, which was to sit tight in our place and make it work for a while longer.  (We do this A LOT & probably always will.)  The thought of leaving our house kind of makes my chest tighten.  I love it.  We poured so much time and energy and thought into it and we live in it exactly how we thought we would and have a sort of easy simple way of living here that I don’t ever want to change.   I’ve always dreamed of building a home from scratch one day, but to be honest, right now, it doesn’t AT ALL appeal to me.  Building or renovating something else for myself would be too much of a re-creation of what I already have right now because it’s just right for us right now.  I would want to put in the same kitchen, same bathrooms, same floors, same paint, same furniture, same EVERYTHING into the house and that’s just boring.  Maybe one day when I’m looking for a change- not more bedrooms for babies- I’d be excited about it.  (And then I’ll get those solid walls of glass 😉

SO… to make room for this new baby -and more importantly, to avoid having to walk up the stairs at night- we’ve decided to turn our family room/ kids project/ craft room/office into a temporary nursery/family room for a year or so until the baby’s sleeping through the night.  At that point, the baby will share a bedroom with Louie (now, 2) and we’ll also know what the deal is with the high school situation.  We’re planning on converting the room back to being a family room / multipurpose room for the kids/ sometimes office.  Here’s a photo of the room when it was our office…

It’s now rearranged with the table against the wall and the green velvet sofa on the wall with the fish print (above.) The walls are covered in the boys’ artwork & random things:

Sadly, the big project table has to go to make room for storage.

We’re bringing in Lou’s old crib and putting it where we currently have a couple of dressers that hold random things like wrapping paper, games toys, books, etc:

When the baby moves upstairs, we plan to put a second sofa in that spot so that there are two sofas facing each other.  For now, though, the floorplan will look like this:

It will be a nice big room with lots of room for the kids to play in.  And also, there will be a massive TV in our baby’s nursery.  Above the changing area.  (Reminds me of Sweet Home Alabama... “You have a baby.  At a bar.”  )  Yeah, we’ll see how that goes.  (I was thinking we’d wait until the baby had moved upstairs to bring in the TV, but Dave really wanted one now and he rarely cares about how we arrange furniture or what we do in our house, so when he says he wants something, he gets it.)  None of our children have ever really slept very much at night either when they’re babies so we end up watching lots of late night movies…   I’m positive the glider & TV will see lots of use.
Here’s the design I came up with last night for the built-ins, going in tomorrow: (yay!)
The changing station will literally be in front of the TV.  Like I said, we’ll see how that goes.  Worst case, we use changing pads on the floor or couch.  I’m not picky at this point.  The entire built-in will be similar in style to the built-ins in our upstairs loft in that it will look as if the frame is made from drywall.  The cabinet doors and drawers will be set right into it.
It will be flush in the front but have varying depths.  The shelves will be 13″ deep but the cabinets and changing area will go the full 24″ deep:
I’m not really doing anything cutesy or nurseryish in there and might just stick the the boys’ art work hung all over.  I have to be honest, I looked at nurseries the other day on pinterest and I’m just really over having one.  I think I started sputtering out on my last little guy’s nursery – he has dinosaurs and jungle things and lots of green- but I just sort of threw it together from things we had after he was born.  The reality is that nurseries are for parents and knowing that this one is so temporary, I don’t want to put together a bunch of random “nursery” things that I don’t really feel like looking at.  (hahah I hope I don’t sound bah-humbug!!)
Anyway, I should have some pics to share of how the built-ins look next week!  In a month or two we’ll break out the crib and start unpacking baby clothes!!!  Cannot believe it.  Will keep you posted!!