We’re in the process of finalizing the kitchen & bath plans at my dad’s Lake Gaston house and our builder is MOVING!! 🙂  The kitchen area is really awkward…  I mean, the most awkward kitchen space I’ve ever worked with.  It’s a fine size, and will be functional, but getting the elevations right and handling the awkwardness of the ceiling- which affects lighting terribly and makes a range hood tough- and all of the angles has been a challenge.  (And I’m saying that nicely.)

Here’s what we started with:

And here’s where we’re going to end up: 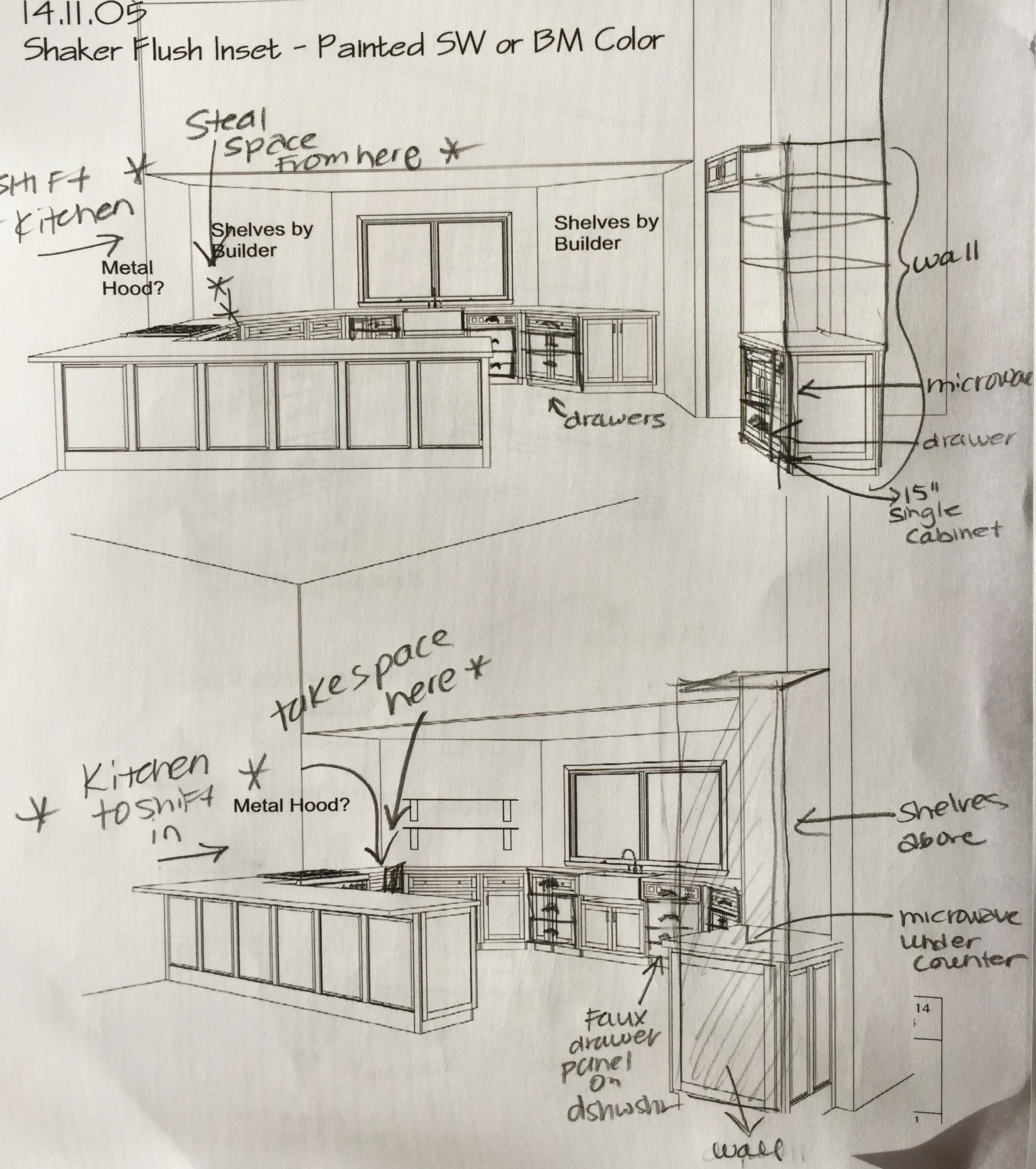 The kitchen, though already open to the living room, will feel even more open because we’ve removed the cabinetry/wall thing that previously blocked the left side off.  We’re not doing any upper cabinetry (the shelves in the pic are just placeholders… I’m working on something else) because I want it to feel really airy and clean.  In my own personal kitchens, I really resist upper cabinetry wherever possible because I like space when I’m working and don’t love  a cabinet  near my face.  If I had a large enough “dream kitchen,” I’d probably have a combination of shelving and uppers. 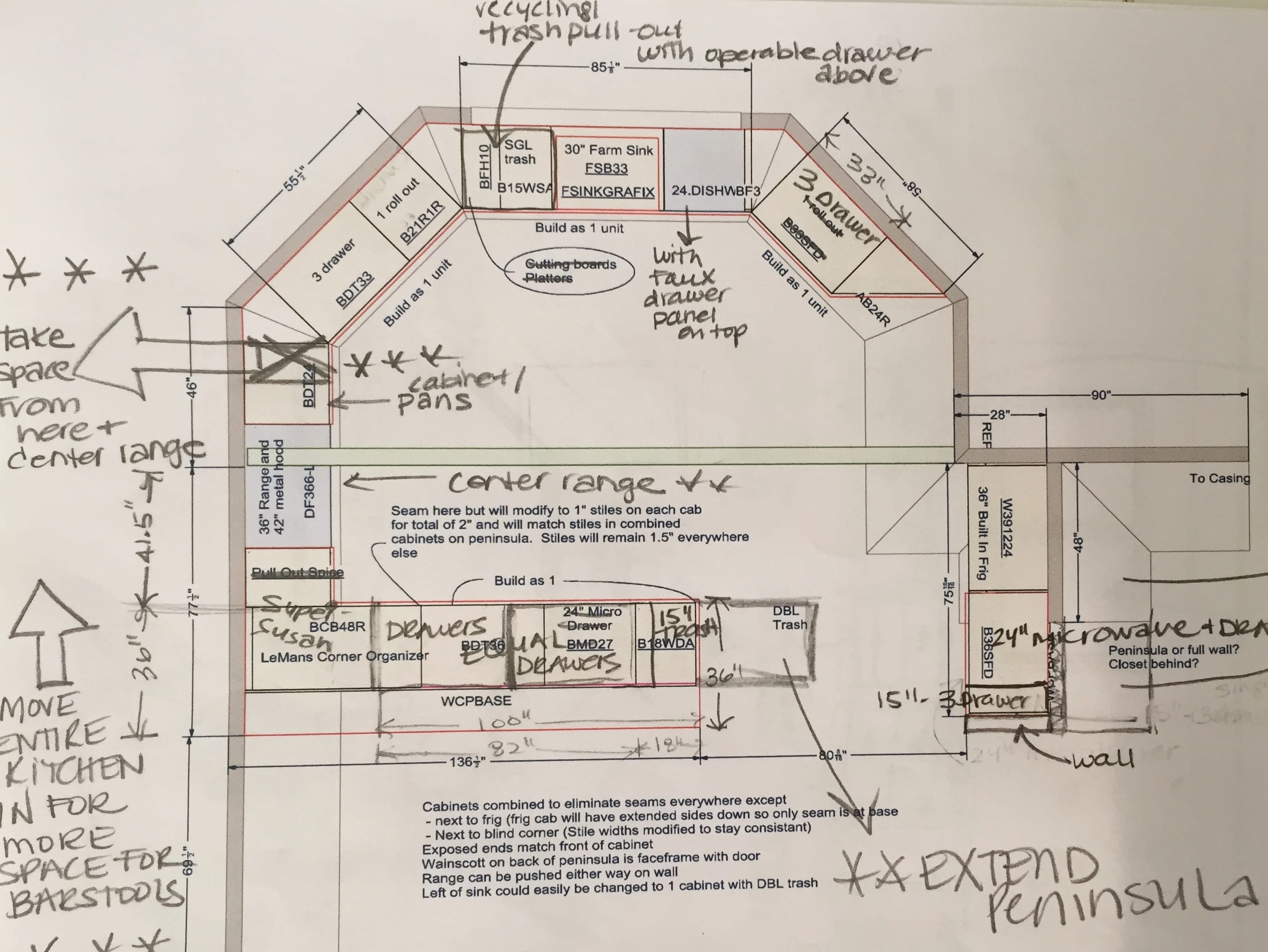 I’ll bring in a small rolling island in the center of the kitchen for additional workspace.

And now onto the awkwardness…  There is a beam going right through the center of the kitchen… On one side of the beam, the ceiling is angled, and on the other side, it goes up 25+ feet.   This makes a range hood situation pretty difficult because it has nowhere to really stop.  The only range hoods that I think look very good without continuing up into a ceiling are those which are rounded at the top.  Like this one: 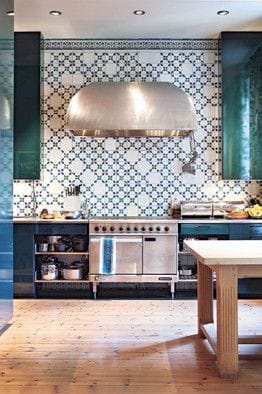 …I love it!!  These are usually a pretty penny though, and our space is more awkward because there would be a beam hitting it at the top, not perfectly centered.  Arghhh.

We’ll have a gas range so it’s especially important that we have a good venting system for it.  I’ve been doing a bit of research on downdraft units (that hide behind a range) and they don’t sound like they really do the job all that well.  (There seems to be a 13″ high Thermador which is supposedly slightly better than some of the other brands because it’s taller so I’ll look into that.  It also seems that some homeowners might not be using some of their  units correctly/ having them vented properly so I’ll be talking with our appliance person.)  On the other hand, my dad doesn’t cook that much and we’ll probably be doing a lot of meals on the grill so maybe one of the downdraft units would be fine. (though loud, I’ve heard…. anyone have any experience with them??)

And then there’s the lighting situation…

Wall lights will suffice for lighting the counters and shelving properly (Will do one above the windows and one above each shelf to the left and right of the window) and I’ll have something made for above the peninsula that swings out over it from the wall above.   In the end, I think it’ll be a really cool detail.  We’ll replace the existing recessed lights with smaller ones.  The dining room will be much trickier to light because the ceiling is almost 30 feet high and I’m just not sure I want a massive cord coming down – ruining the view a bit- for what will need to be a rather small light fixture over the table.   The table will float in front of the stairs like this: 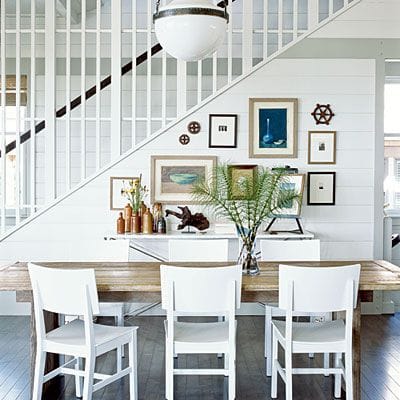 {Looks like they went for the long corded chandelier… a possibility.}

I’ve been thinking about doing candelabra style lamps on the table but am not sure how we’d like dining with lamps protruding into the conversation and with having so many short heads around the table it might be an issue…  It is gorgeous though!!

I guess we’ll just need to think about what will bother us more… insufficient lighting, a loooooong cord, or possibly-in-the-way lamp bases.  I may just wait and see how it feels and go from there.  I’ve  also thought about keeping hurricanes on the table to for forced (but truly needed!) candlelight.  We’ll see.

And for the final bit of awkwardness… we have the backsplash.  I’m not 100% decided, but I’m leaning towards going with a shiplap that will continue up onto the ceiling in the kitchen.  I think it’ll help the ceiling and take a way a bit of the 90s feel the room has. 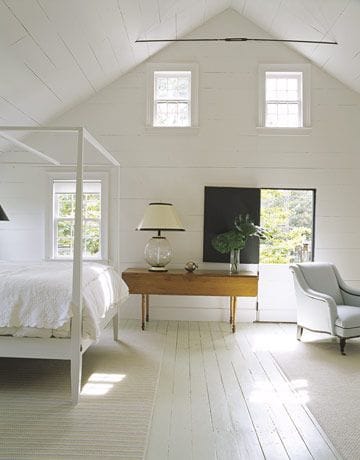 {House Beautiful… one of my favorite rooms ever}

There’s not really a good stopping point in the left wall for it as the left wall is also the living room wall, so I may only be able to do it on the angled back walls.  :/   Which would mean I wouldn’t have it behind the range… Not the end of the world.  (We don’t have a backsplash at all in our kitchen at home, even behind the range, and we cool a ton and are seriously messy.  We used washable matte paint on the walls so when something does splash on the wall behind the range, it wipes right off.) But it’s the starting and stopping of a backsplash in a seemingly arbitrary spot that kills me.  When I get an hour or so, I’ll get to pondering which stopping point will be the least awkward,    (ohhhhh…  I just had an expensive thought… what if we did the entire room??  May have to get a quote to see how bad.)

For countertops, we’re going with soapstone.  We have it in our kitchen and home and I can’t get enough of it.  I’m hoping to do an integrate soapstone sink: 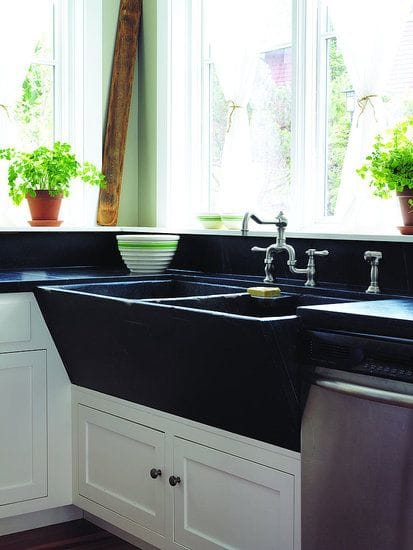 We’ll be doing shaker cabinetry (like in the image above) and I haven’t yet picked the color.  I’m all over the place on that…  I could go white but I’m open to colors too.  Once I finish up with the living room fabrics, I’ll have more of an idea of where we need to go in the kitchen.  In general though, I know I want a heavy does of white (which we’ll be getting with the shiplap) with warm wood and black accents.  I’d like the shelves flanking the windows to hold wooden cutting boards and am hoping to find just the right wooden island or butcher block.  A mix of blues & indigo for the fabrics and furnishings in the living room, and depending upon how dark/light things are feeling to me, it could go on the cabinetry too but we’ll see.

{Love this palette by Tom Scheerer, one of my favorites!!  The blues are just what I’m envisioning… We’ll leave out the browns. }

Anyway, hope you liked this little peek into the lake house plans, and I am off to WRITE!!  I only have a couple more weeks until the manuscript for my book is handed in!!! EEEEEEEEK!!!!   Wish me luck!!!

ps- For any designers in the DC area who are interested in checking out the new design center when it opens next week… I’ll be part of a social media panel hosted by Robert Allen and houzz in the brand new Robert Allen showroom on opening day!  It’s at 1:00 OM in Suite 410.  RSVP  here!  Would love to see you!! 🙂