{Mount Vernon Federal reproduction Convex Mirror by the Friedman Brothers  $3200}
I’ve had my eye out for a Federal-style convex mirror for a while…  Alone, they can be very serious pieces, often thought of as formal & symbolic.  Above, the 13 balls surrounding the mirror represents the 13 original colonies, and of course, the Eagle, chosen by our Founding Fathers, symbolizes the United States of America.  Originals and even good reproductions like the mirror above cost in the thousands.   In the 1940s and 1950s, a bunch of reproductions were made out of plastic and other cheaper materials and then painted gold.  I looooove the one below on liveauctioneers.com with a starting bid around $1200. 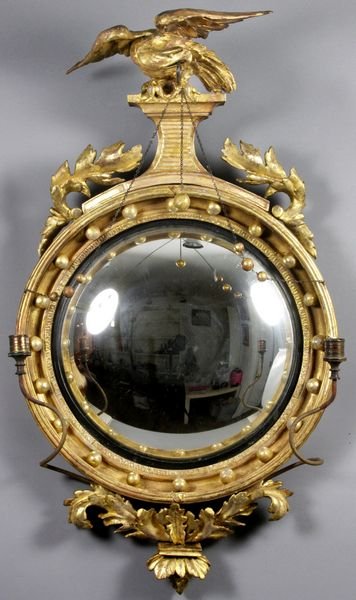 In the photo below, Dorothy Draper used a massive ornate convex mirror for the Greenbrier Hotel: 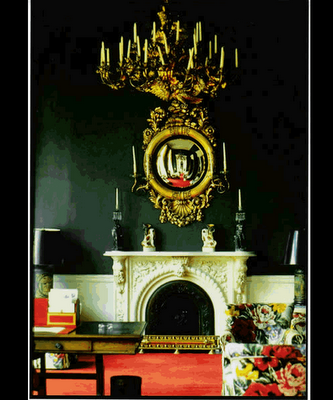 {Dorothy Draper, the Greenbrier Hotel, photo via tilevera.com)
Below, Markham Roberts used a guilded Regency convex mirror above a fireplace in a new home that he worked hard to “age.”  This story came out a few years ago and I really loved it because it showed how to add patina and a sense of history & permanence to a brand new home.
{Markham Roberts in House Beautiful by Eric Piasecki}
…But as formal as Federal style convex mirrors can come across when used traditionally, they can also read modern & fresh when used unconventionally.  Below, Darryl Carter has a painted black convex mirror in his bedroom.
{Darryl Carter’s bedroom in Elle Decor Magazine}
I love Eddie & Jaithan’s small white one below.  It’s so unexpected and adds a bit of whimsy to the room:
{Eddie Ross in Lonny, photo via Matters of Style blog}
And how pretty and & glam is this mirror layered over mirrors below?
{also Eddie Ross!!}
A bit more versatile are plain convex mirrors as seen in the living room below.  The domed mirror itself is beautiful:
{JB Randall Powers in House Beautiful, photo by Luca Trovato}
Smaller ones can be added almost anywhere: 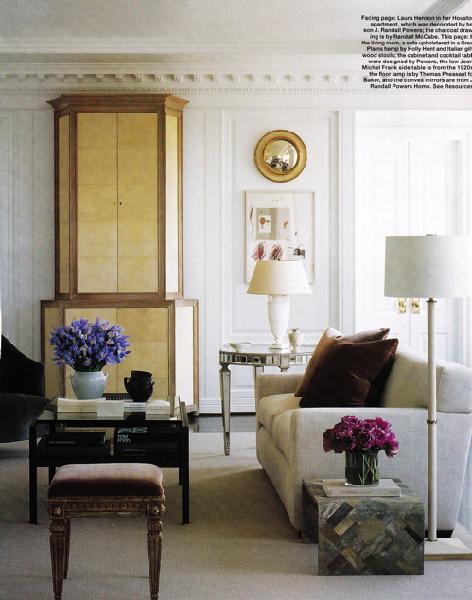 {image via decoroad}
If you look closely at many of them, you’ll see the balls or starts inlaid in the frame reminiscent of the 13 original colonies.  Many of them have exactly 13.
{House Beautiful}
{image via Homeandgarden.com}
The convex mirror below lends a cool vibe to the room.  I love it when the mirror is old & spotted.
{Miles Redd in House Beautiful}

…And… -finally-  I found my very own vintage convex mirror while shopping at High Point with my friend Maria of Colour Me Happy.  I think it’s one of the 40s or 50s reproductions and I might reguild it.  The mirror has been aged to perfection and it’s complete with the 13 balls representing the original Colonies.  It was just the thing missing from above my nightstand:

{my bedroom.. photo by Helen Norman}
I’m always on the lookout for them and ebay has some pretty good deals.  That being said, there’s nothing like an original & the beauty & history it posesses, so antique stores & sites selling mirrors in the thousands are also worth looking into if you have the budget.