So I cannot believe we finally made the switch, but we got a new KING sized mattress to replace our queen and it is HEAVEN.  That additional 16 inches is a-mazing.  (Queens are at 60″ wide x 80″ long and a standard king is 76″ wide x 80″ long.)

We’ve always had a queen and been fine with it, though our dog sleeps in our bed (yeah, I know) and we often have lots of little nighttime visitors.  There are times when there are five of us plus our pup in the bed and it gets tight.  I hadn’t thought much of ever really switching because I love our brass headboard (my husband found it on the side of the road and it’s actually a full size that we made work with our queen mattress) and because I didn’t want to fill up our entire bedroom with bed. 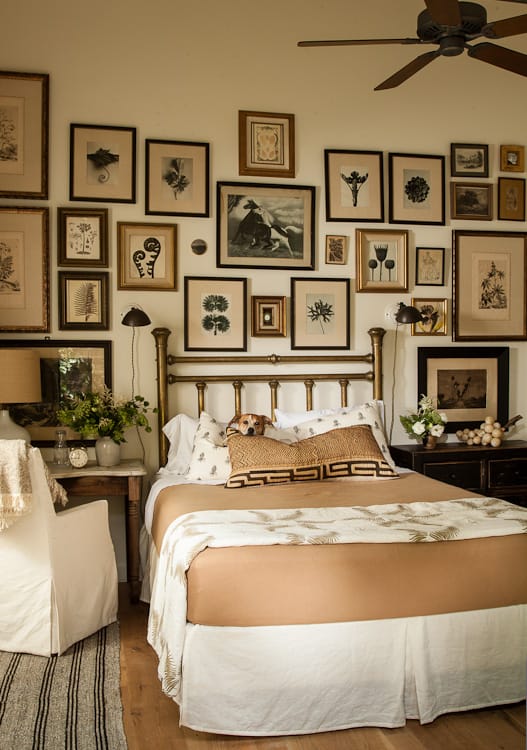 BUT… about a month ago when we installed the mountain house project, I slept on one of the new mattresses there and something amazing happened…  I haven’t mentioned it on the blog but I’ve had some pretty crazy neck issues for the past two years.  They came about around the time Lou was born (you know that awkward newborn hold/ terrible way of standing where you sort of hunch over them?  Well it messed me UP.) and at first it was really painful (my neck would kink randomly all the time) until eventually the pain stopped and my hands arms and feet just started going numb at night.  The more I’d lift during the day (ie moving furniture around on installs and photoshoots) the more numb my body hands and feet would go at night and even during the day.  I’ve had an MRI (showing some disc bulging) but they really haven’t been able to figure out what was wrong. A brain MRI was recommended just before I left for the mountain house last month. 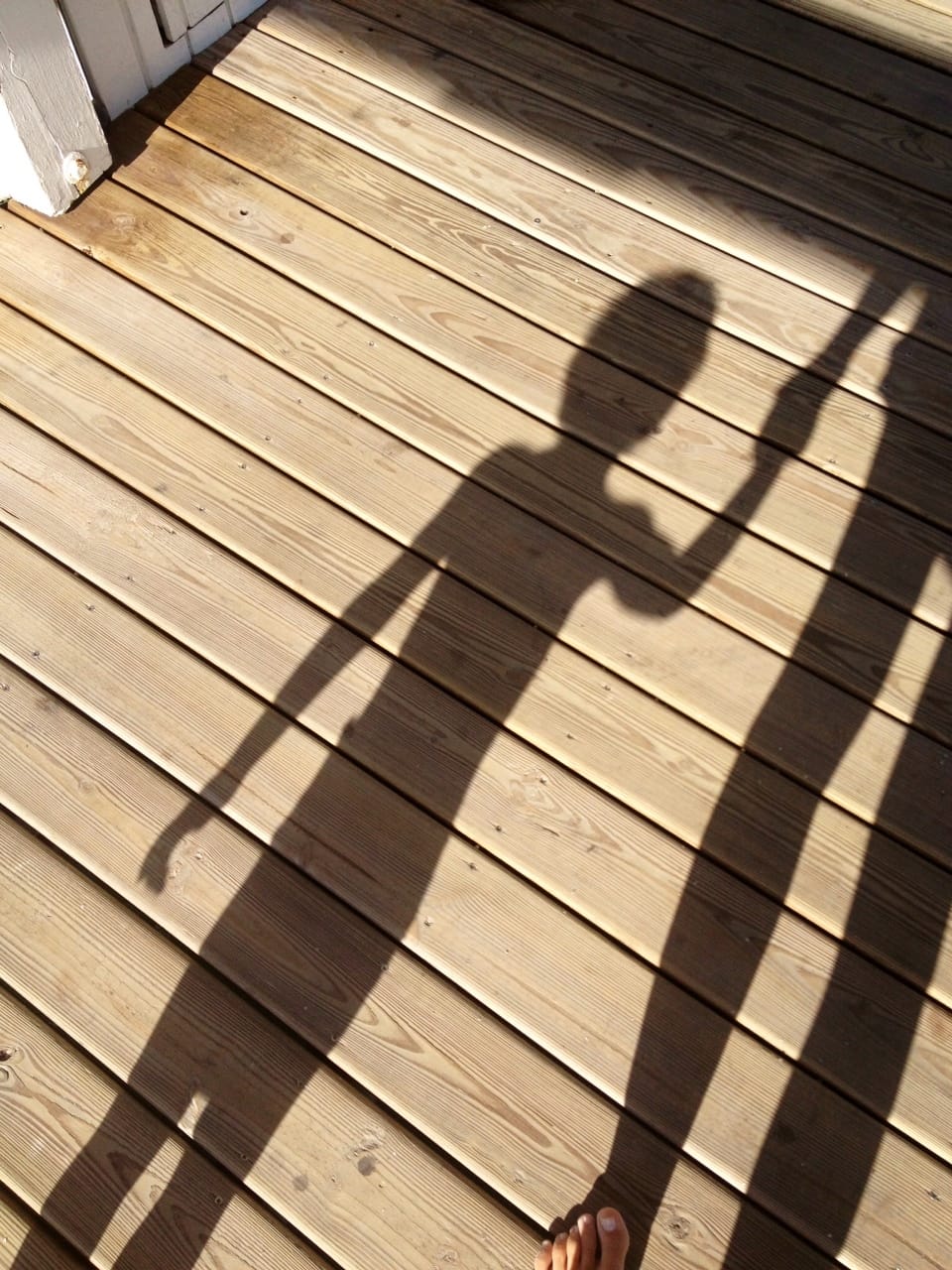 {my little pain in the neck = totally worth it}

SO when I woke up the first morning after arriving at the mountain house- after moving more furniture than I should have the day before- I realized I hadn’t gone numb that night. (!!)  I didn’t think much of it -as the day was insane- but a few days later I realized that I hadn’t gone numb any of the nights at the mountain house.  (!!!!)  I honestly couldn’t believe it.  After two years of random pain & being numb I felt amazing.  I wasn’t sure if it was the mattress or the injury finally healing. (??) Not a single doctor had mentioned my bed as being a possible issue.

When I came home and slept in our (very firm, queen-sized) bed, I went back to going numb at night.  I called the company my cousin had gotten the mattress from and ordered it right away.  The brand is called Dutchcraft and it’s some sort of gel mattress.  (Odd, I know, but I really didn’t care what the thing was made of.  I don’t even know the name of the mattress, I just asked for the same one my cousin had ordered.)  It came rolled up.

We decided to go for a king sized mattress for obvious reasons, but I did worry about how it would feel in our bedroom.  I was sad to see the brass headboard go and I’ve gone with a very different style of bed to replace it.  The new bed will arrive sometime in the Fall, so we’ve been sleeping with the mattress right on the floor for the past month.  It’s kind of fun but I think it changes the way the mattress feels a bit because it’s not on a boxspring, which has more give than the floor does.  I don’t go numb most nights but have gone numb a couple of nights…  I’m really hoping that when it’s sitting on the bed slats, I’ll be good to go.

{my bedroom, now, with a super-stylish mattress on the floor}

So clearly, with the switch in bed sizes, I’ve made a complete mess of the bedroom I’d so carefully planned out.  I’m keeping my fern star duvet cover (not seen in the pic above, which shows an old queen-sized comforter we had that just barely fits) and will probably just get the same bedding I already had in king size because I’m hoping to make minimal changes.  We’ve removed the old marble console/ writing desk from the left side of the bed and put the black dresser there instead because it’s slightly smaller & has storage (and with a king, both pieces don’t fit.)  We took a set of nesting tables from another room and are using them on the right side of the bed.  I’m dreading having to rearrange the gallery wall above my bed haha.  I probably wouldn’t touch it (I’m pretty over doing things in my house at the moment) but I’ll need to shift my right wall lamp a bit to the right, so the entire “center” of the wall will shift. 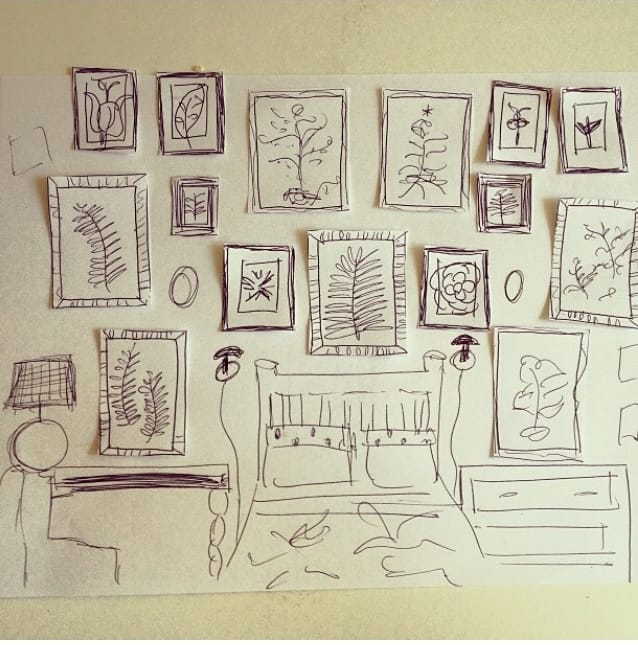 I’ve played around with the idea of moving my botanicals somewhere else in the house altogether.   Because they’re behind our heads when we’re in bed, we only really get to see them when we’re walking around (rushing usually))…  On one hand, I like this because when I’m in bed, the room feels very clean and almost empty because I can’t see the craziness behind me, but I also don’t get to enjoy them as much as I’d like.  When the new bed arrives, I’ll have to see how it feels in there and think about it then.

Anyway, I have to say that now that I have a king sized mattress, I see what all the hype’s about.  I’m in LOVE.

ps- Thanks for your patience with my less-than-frequent posting lately.  I’m knee-deep in working on the book right now and am learning that I’m really only able to put out so much writing/ content in any given week.  I have a few before-and-afters coming up on the blog as soon as I can get to them.  If you’ve missed me at all, I’m posting on instagram pretty regularly (ie probably waaaaay to much!!) so there are almost always updates there. Hope you’re enjoying your summer!!

viagra online usa: viagra without a doctor prescription – viagra
vgrmall.com where can i buy viagra over the counter

cialis and interaction with ibutinib – cialis

cephalexin without a doctor prescription https://keflex.webbfenix.com/

[…] There you can find 39445 additional Information to that Topic: laurenliess.com/pure-style-home/a-king/ […]

[…] Read More on on that Topic: laurenliess.com/pure-style-home/a-king/ […]

[…] Find More to that Topic: laurenliess.com/pure-style-home/a-king/ […]