A Bath to Remember

{a dream bathroom from an unknown source via pinterest = LOOOOVE}

It’s been a while now since I’ve written about our Florida project but construction has begun and we’re finally getting into the fun parts!!  A quick rundown on the project:  The house is for my cousin, Adam and his fiancé, Nikki.  (They got engaged last week- yay!!!) It’s been underway for  couple of years now and will be finished in early Spring of 2016.  View the demo here.  (The original house on the property was infested with mold and whatever could be salvaged, was donated prior to demo.)  When I first announced the project, the comments section got really interesting as Adam’s decision to build such a massive house (Around 17,000 square feet I think??) was controversial.  Lots of people thought it was disgustingly large and distasteful and wondered about all the other things he could be doing with his money.  Others felt he’d earned it himself so he could do what he wanted with it.  I’m of the “to each his own” camp myself.

For a full introduction to the project and my crazy cousin, click here.  (Sadly, the comments of that posts didn’t move over when I changed blog platforms but if anyone cares or knows how to get to the old website without it redirecting or do that cached page thing- no idea myself-  they should still be there.)

Because people have asked in the past, I thought I’d refresh anyone who might be curious about it-  We don’t charge family for work. Never have, never will.  Because of this though, projects that we help anyone in our family with take a serious backseat to client projects…  and it’s mostly done in my spare time.  Our family members have to manage the projects themselves and deal with chasing me down for phone calls and questions.   And they have to be nice to me even though they don’t have my full attention whenever they need it like my clients do.  Adam is one of my favorite family members to work with because he basically let’s me do whatever I want to his homes which is ridiculously creatively satisfying (!!)  and is always nice even when I don’t pick up the phone for days.  (You know, when I’m busy doing stuff like having a baby or sleeping.)

Anyway, the home is Mediterranean in style and I’ve been getting inspired by a lot of John Saladino’s work.  I’m working on the bathroom now and thought you might like a peek into the process.  Here’s the layout, drawn by a super-talented artist, Chuck, in Florida: 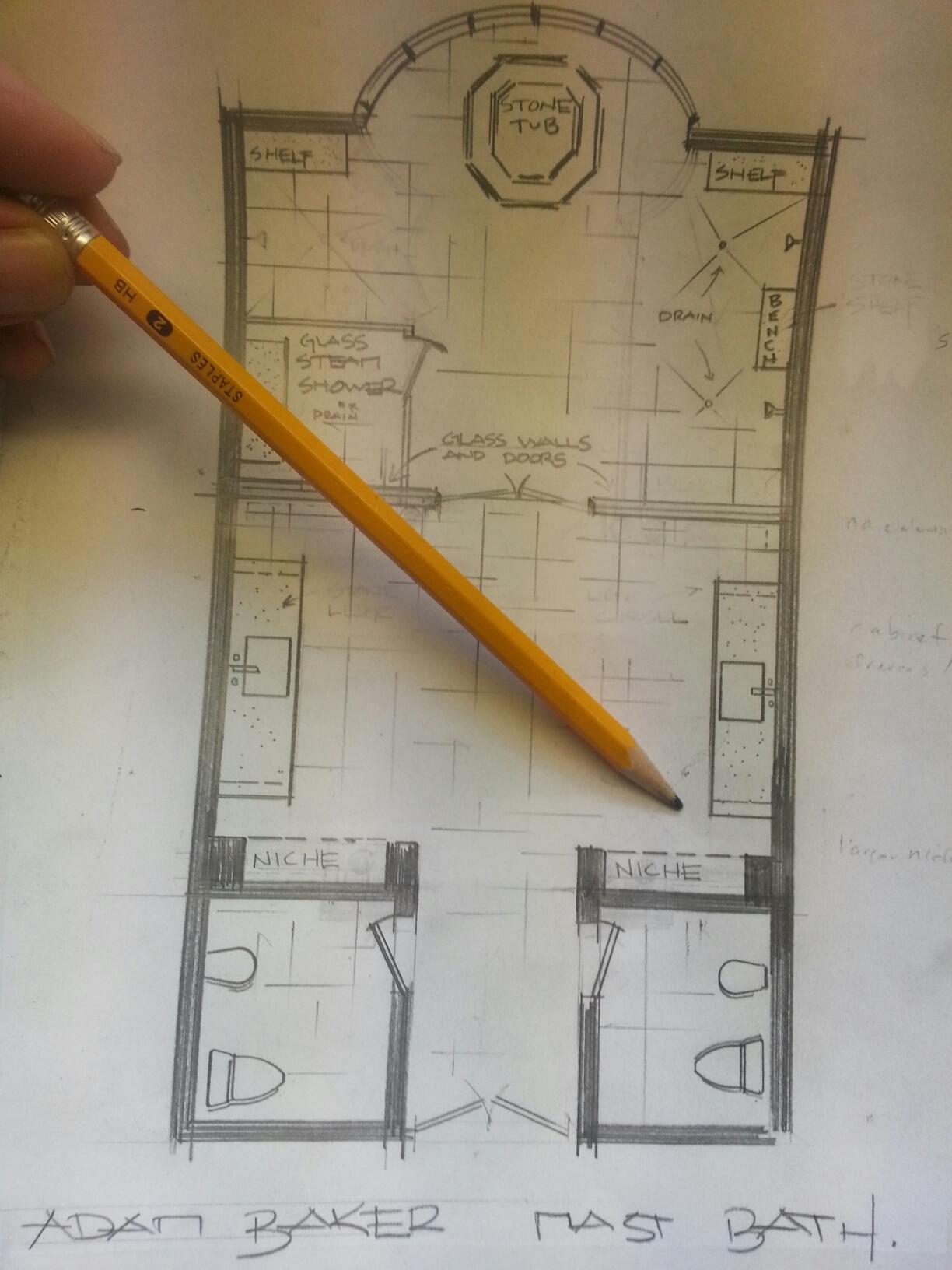 The room is massive and we’ve separated it into three distinct areas:

1) The rooms for the toilets (lol is there a better name for that??!!)

3) The tub and shower area

The vanity area and the tub/shower room are separated by a large wall of glass like this: 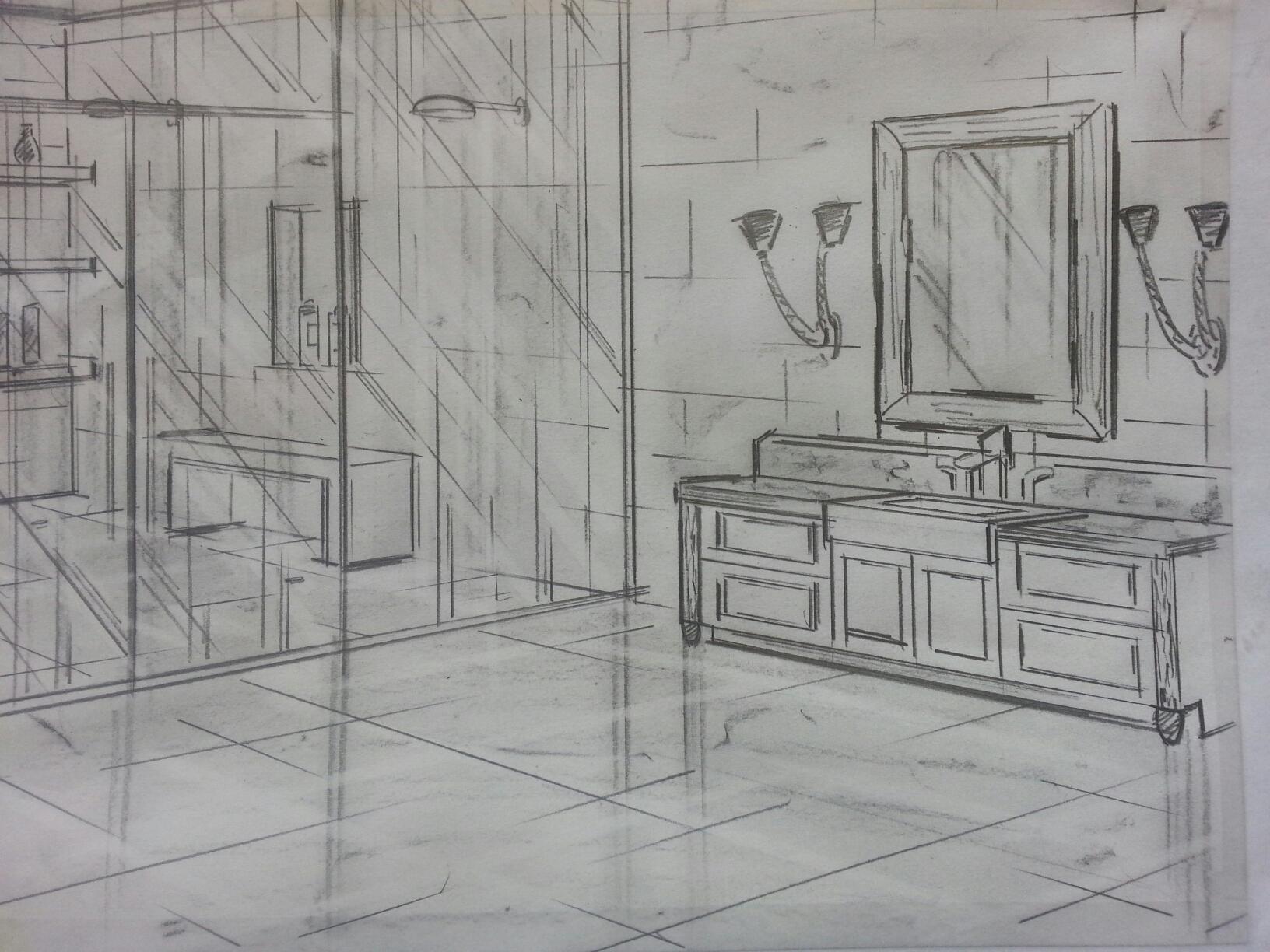 …Except with a metal frame like this for a conservatory-feel:

On the right side of the tub/shower room there are two open showers, and on the left side is a closed steam shower.  The tub is inspired by an antique Italian fountain from Ancient Surfaces, who is making a new reproduction for us.  (We’re actually getting a lot of the reclaimed materials for the home from Ancient Surfaces, and the owner, Tony, has been really helpful.   Their things are incredible!!!)

A while back, I fell in love with a shower made from half of an antique fountain by John Saladino: 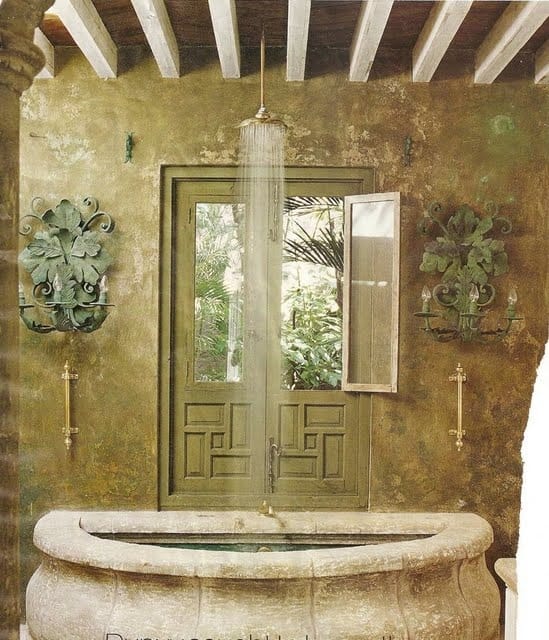 …And then we stayed at the Cheeca Lodge in the Keys and I also fell for the tub that was filled with a filler coming from the ceiling on our balcony:

{pic from my instagram, a couple of years ago at the Cheeca Lodge}

So, when the bathroom design called for the tub as focal point, I thought it was the perfect opportunity for a combination of my dream the shower and tub!!  The tub will have a floor-mounted filler along with a ceiling filler and it will have a special interior made for sitting in.  I cannot wait to see this thing!!!

This rendering gives you the general idea, though the details and tub shape will be different: 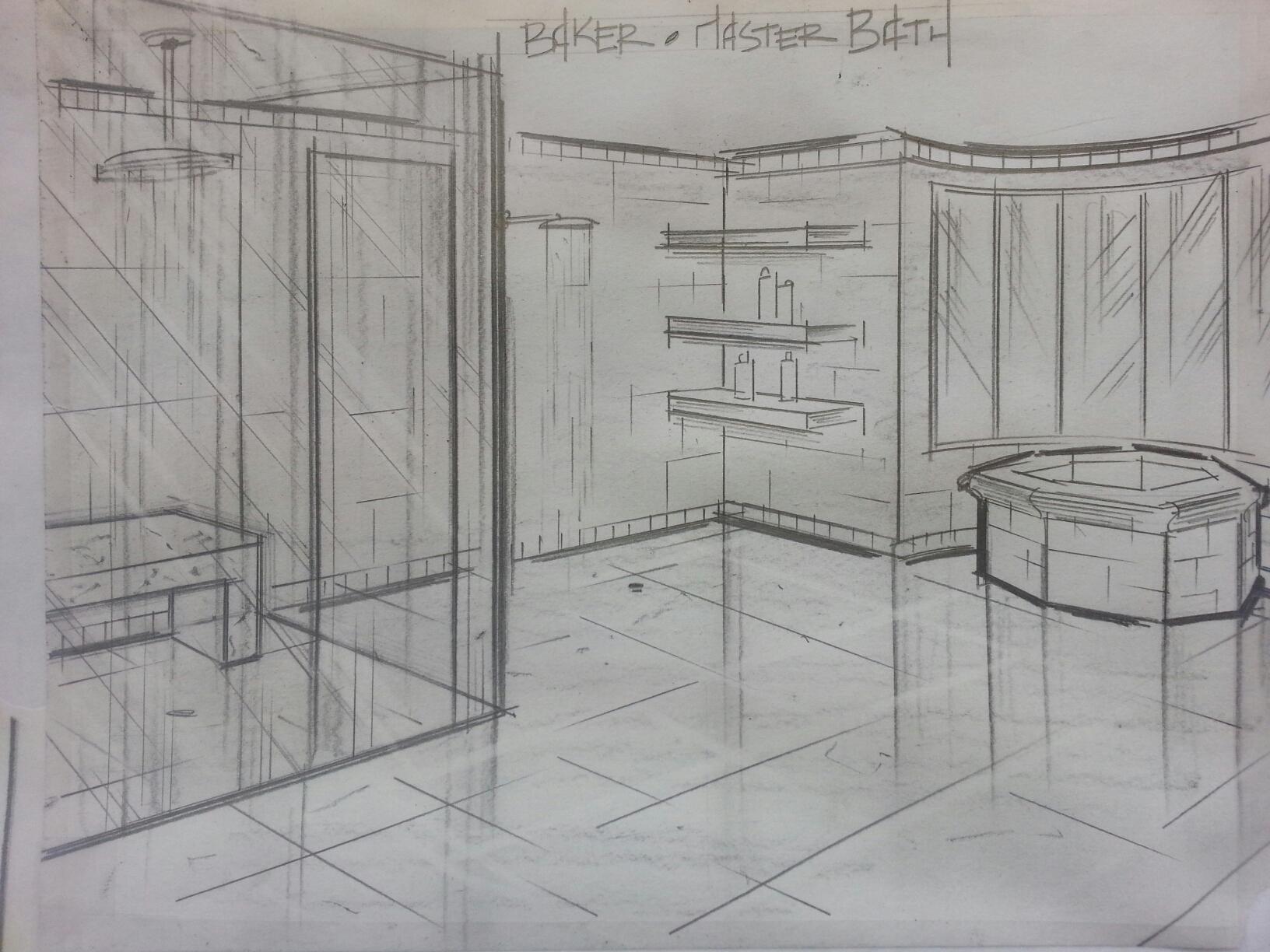 Recessed niches near the vanities will hold towels and baskets with supplies: 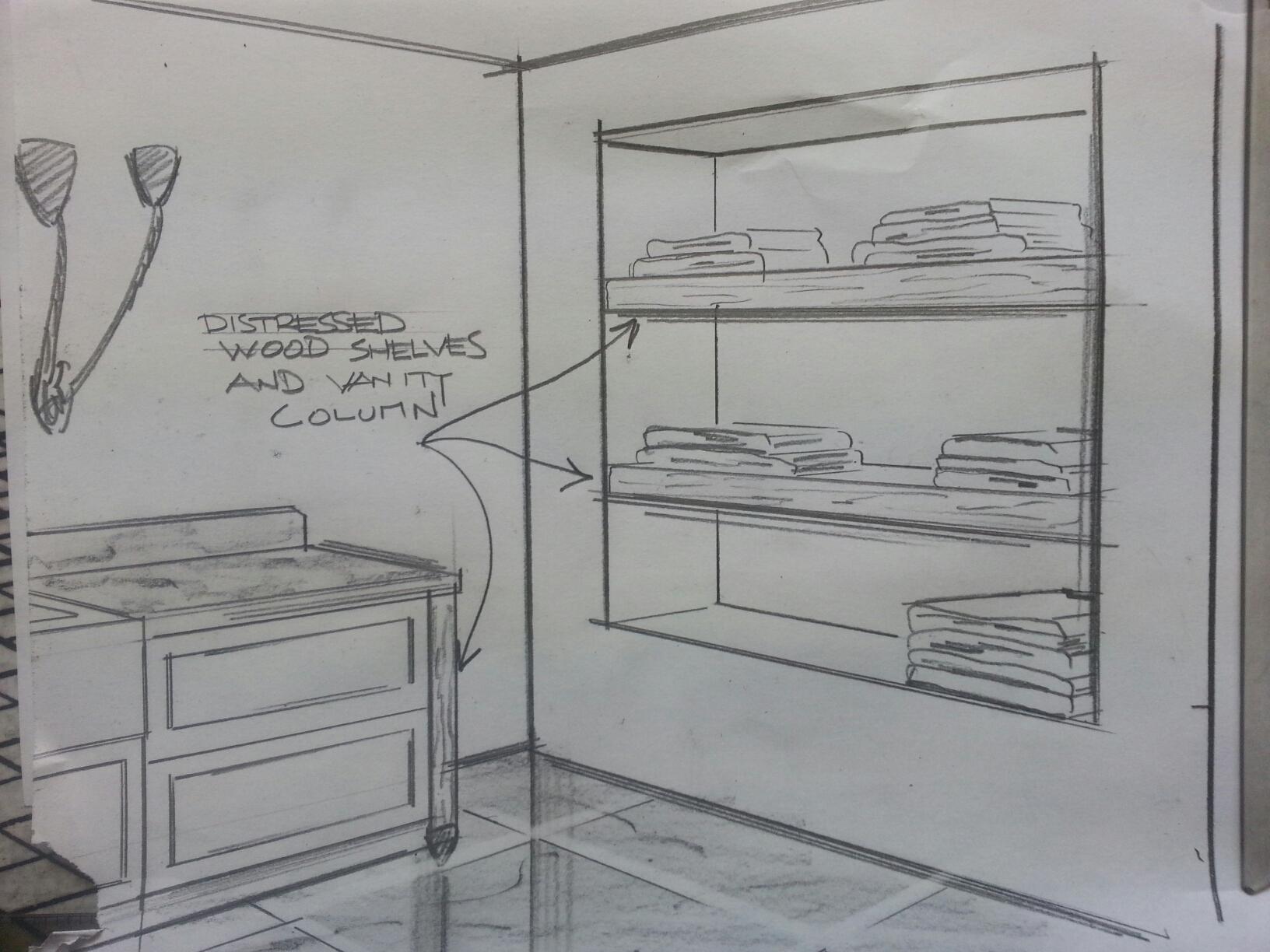 I’m working on the tile and materials now.  The walls will be plaster and the floor tiles most likely a mix of pebble tiles and antique coral tiles from Ancient Surfaces.  I want the whole house to feel fresh and light and airy yet warm, so the palette will be made of soft ivories, beiges and sand tones.  My cousin gravitates towards Fauxscan things and dark heavy interiors but I’ve definitely opened him up to clean lines & light with dark accents so we’re making really great progress.  (woohooo!!!)  Next up- vanities & lighting.  (What you see here are just place holders)  I’ll be sure to share progress photos of the house along the way…  drywall will be going up soon!!  (And more on Instagram… my name on there is “LaurenLiess”)   Anyway, hope you enjoyed!!