It’s one of my favorite weeks of spring right now- the “week of wisteria!!!”  (And I probably made that up but if “national pizza day” is a thing, there should really be a “week of wisteria.”) Technically I think peak blooming in Northern Virginia was probably last week but we were out of town for spring break and the wisteria had sprouted while we were gone… by the time we got home, the vines were lush and green and there were some blooms, but it wasn’t super heavy with blooms the way it probably was the week before.

When I saw our house for the first time, we had to duck under a mass of wisteria hiding it from the driveway and I was in love.  It had all but crushed the arbor and had attacked all of the trees around it.  So… we did get a new arbor so we don’t have to duck any more but I haven’t really done anything about the wisteria attacking all the trees.  Dave is constantly saying we need to free the trees (it’s going to kill them eventually) but I can’t bring myself to do it….  I kind of love the wisteria more!!!  Eventually, we will – and I’ve done it a little- but for this spring, I’m loving my jumble of wisteria attacking everything around it.

Wisteria was brought into the US in the early 1800s from both China and Japan.  I have the Japanese variety and mine blooms with green leave on the vine and you cannot kill it.  (I believe the Chinese wisteria blooms with no leaves on the vine which is also stunningly beautiful.)  I planted American wisteria at one of our houses and it didn’t go as crazy as the Japanese wisteria seems to.  I’m not great at taking care of soil and one of the reasons I love a crazy exotic invasives like wisteria is because all I have to do is cut it back (or think about cutting it back) vs. willing it to grow. Most landscapers and builders shy away from wisteria due to its aggressiveness with trellises, gutters and siding but I think that’s probably what I love most about it.  I know it sounds nuts, but I’d rather have it and have to repair for it & damage my house than not have it.  There’s a spot in our back garden where it’s started wrapping around a column with a gutter on it and Dave is worried it will pull it off the house or smash it (which it probably will.)  He cut it all down at the beginning of the season last year but it’s baaaaaaack!!! 🙂  I couldn’t be happier.  I’m going to read up on how we can train it to go horizontal under the roof line and try to get it to go across the entire back porch.

The one spot where I sadly will have to cut it soon is where it’s trying to eat a bradford pear tree in the front of our house.  This’ll probably  be our last season with it there as I don’t think I actually want to say goodbye to the tree.  Here it is in all its glory: 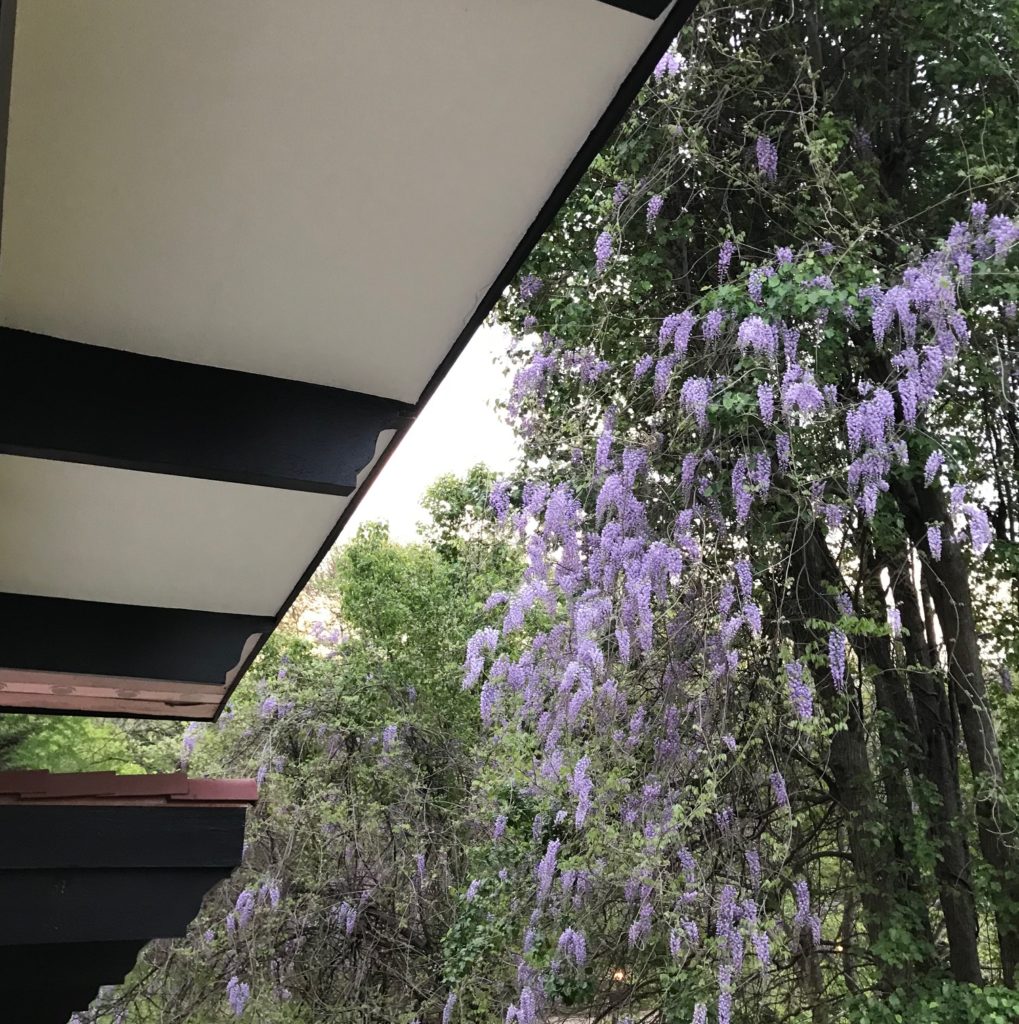 I also love the look of white wisteria.  There’s a beautiful old house around the corner from where I grew up in McLean called “The Wisteria House” (they have a cute little sign) and they have both Chinese white and purple.

I also love the separation & privacy it provides from our driveway.  I love going under the arbor and feeling like I’m entering into something special.  (Lol not that it actually is… it’s generally where you will see the toys our kids or dogs have left out in the yard 😉  Here’s a shot where you can see the path to our front door from under the arbor:

Even though most people would tell you not to… how beautiful is this?!!!!! (below)

…But I wouldn’t be mad if it got out of control and did this:

And, finally, we took the photo below weekend…  We haven’t had a lot of downtime at home because the boys are all in lacrosse and it’s CRAZY how much they practice/play but Dave made an easy little lunch at home on Sunday and I got to play outside with the kids. (And I know it’s kind of ridiculous but I love coordinating my outfits with the girls’…  My mom and I used to do it when I was young and now I love doing it with Gisele and Aurora.  It’s hard to see in the photo but Aurora is wearing bright yellow sandals that matched our dresses.) 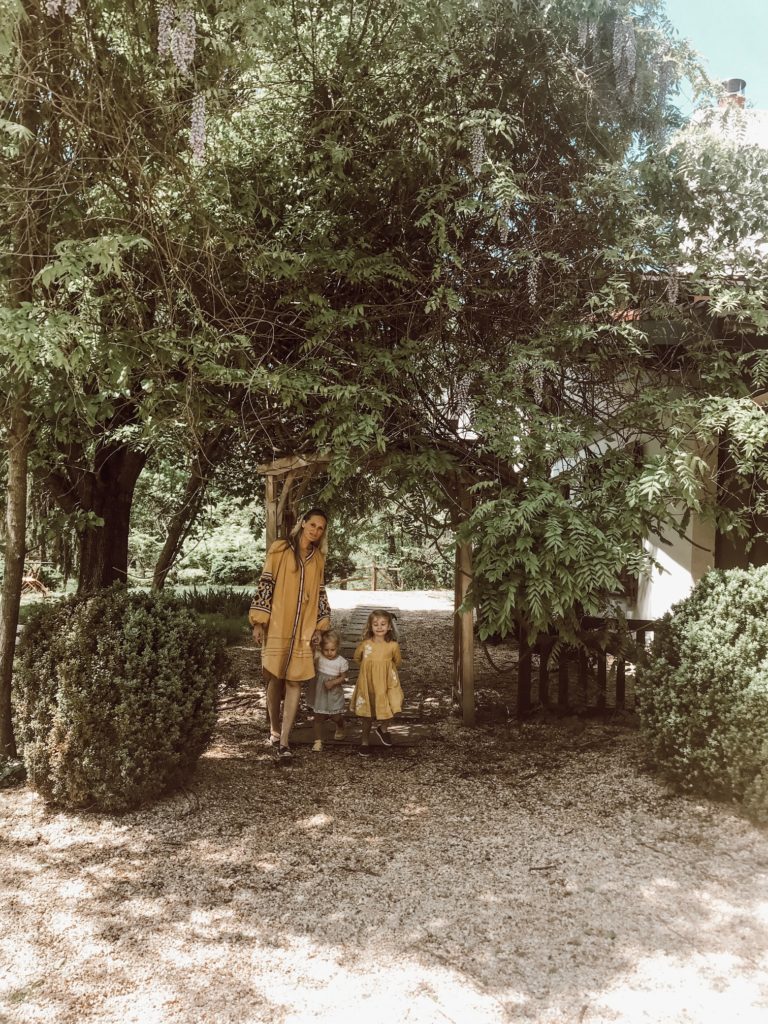 Like I mentioned in my last post, I’m going to try to link to sources where possible and create inspiration boards based on photos- some will be of us and others will be of rooms we’ve designed.  Clicking on the photos will take you to the product. 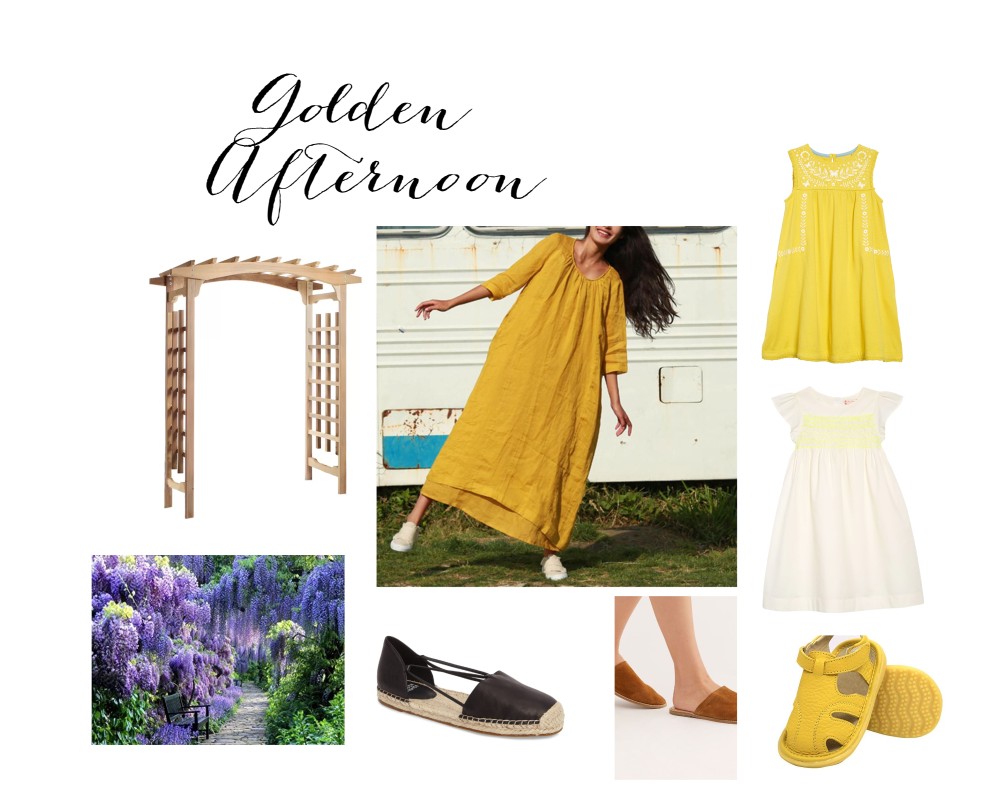 I’ve had the dress I’m wearing in the photo for a couple of years (it was from Free People) so it’s not available any more, Gisele’s dress is a season or two old (I often buy the kids’ clothes years in advance because I see something I really love or something is an amazing deal)  and Aurora’s dress is a hand-me-down from Gisele and is also a few years old so I’ve found some dresses available now inspired by the photo.  (I’m kind of in love with them and might need that dress for myself!!!!)  The black espadrilles are the ones I mentioned in my last post that I pretty much live in and the yellow sandals are the ones Aurora is wearing.  They’re super inexpensive and we got them in pink too. (They come in pretty much every color)

Anyway,  I’m off to work but I hope you enjoyed this little peek into my wisteria problem!!