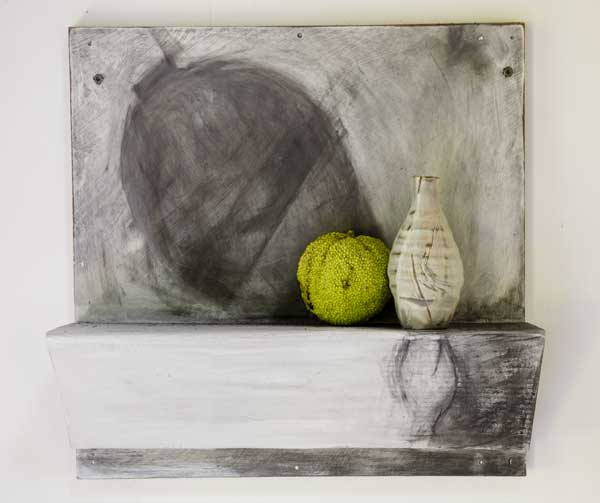 {image from Rough Ideas by Catherine White…  her pottery is gorgeous}

I might have found something I love more than mossballs.  (yeah, yeah, I read the posts, moss balls are so done- but I still love them 😉  Anyway, my client, Sandy, gave me some little green balls from the farmer’s market, saying they would keep crickets out of the house, and they’re so beautiful to me! 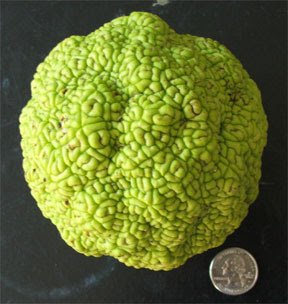 And they smell so good too.  Sandy had a plastic bag filled with them from the farmer’s market and she had planned to place them around her basement to scare the crickets away.  She left them in the bag a day or so and before she even had the chance to place the balls around the room, the crickets had left!

Sandy emailed me letting me know they’re called osage oranges, so I did a little reserach.  (And by “did a little research” I mean I googled ‘osage orange.’)  According to wikipedia, they grow on trees and are not actually closely related to citus fruit but are actually in the mulberry family, called “Moraceae.”

And how crazy is this:  “Recent research suggests that elemol, another component extractable from the fruit, shows promise as a mosquito repellent with similar activity to DEET in contact and residual repellency.”  So not only are they beautiful & they smell good, but they really do keep bugs away!  I’m going to have to try to put some in the boys’ playhouse shed because spiders looooove it.  (Last Fall, we had an insane spider crickets invasion in our basement when Eddie & Jaithan came to visit, so the first thing Jaithan asked me before they visited this Fall was, “Are they gone??” hahha)

The wikipedia article goes on to say, “The fruit has a pleasant and mild odor, but is inedible for the most part. Although it is not strongly poisonous, eating it may cause vomiting. However, the seeds of the fruit are edible.”  hmm… so there goes the answer to my question of ‘what do they taste like?’  I’ll never know.

It’s interesting that most native animals don’t use it as a food source because typically seeds are dispersed by animals.  “One recent  theory is that the Osage-orange fruit was eaten by a giant sloth that became extinct shortly after the first human settlement of North America. Other extinct animals, such as the mammoth, may have fed on the fruit and aided in seed dispersal.   An equine species that went extinct at the same time also has been suggested as the plant’s original dispersal agent because modern horses and other livestock will sometimes eat the fruit.” 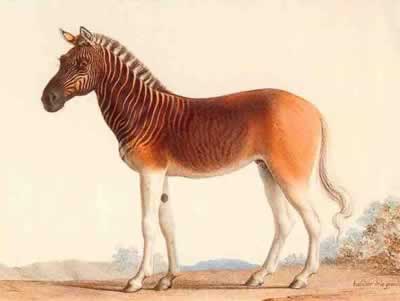 {Image via Weird and Funny}
So…  after getting a couple osage oranges from Sandy and loving the smell (I have a wolf’s noze & am really affected by smell… so much that I keep them on my desk just so I can smell them all day long) we were out driving this weekend and I saw what looked like a tennis ball on the side of the road.  I knew right away it was an osage orange and then looked closer and saw there were a ton of them all along the sidewalk near the park we were driving by.  Dave pulled over (gotta love him) and Christian and I hoped out after emptying the  “returns” out of a  plastic Target bag we had in the car.  I had to go into the woods to get to the pretty ones & got a bit scratched up but it was worth it.  (Christian did warn me, “Be careful mommy, don’t get owies.”)  Now we have a ton!!!  I couldn’t even fit them all in this bowl: 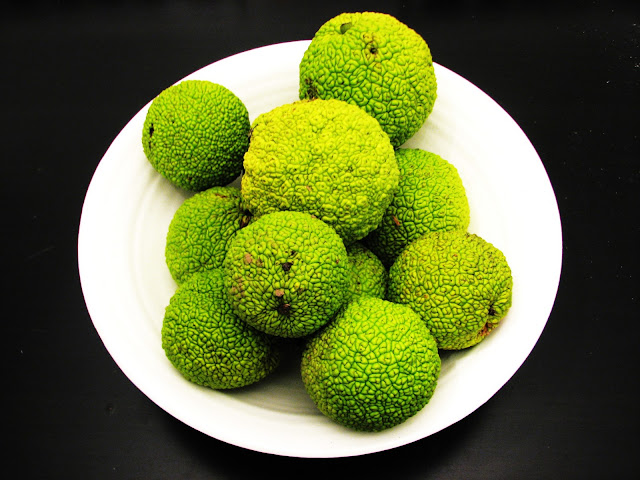 And now I know I can get them every year!!  They’re said to grow in the midwest and clearly they grow around Virginia too so keep your eyes peeled.  They’re now all over my house, which of course called for me to do a mini photo shoot.  Here they are in the little shelf in our entry: 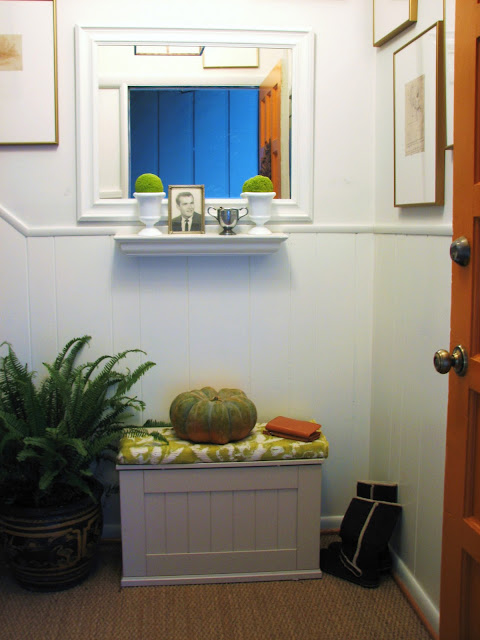 I love having such a tiny little shelf when we first walk in because there’s only room for a teensy tiny amount of junk to accumulate.  (Eeeeek but that doesn’t really stop us from using the floor.)
Right now on our storage bench I’m using the wrong side of a Calico Corners remnant: 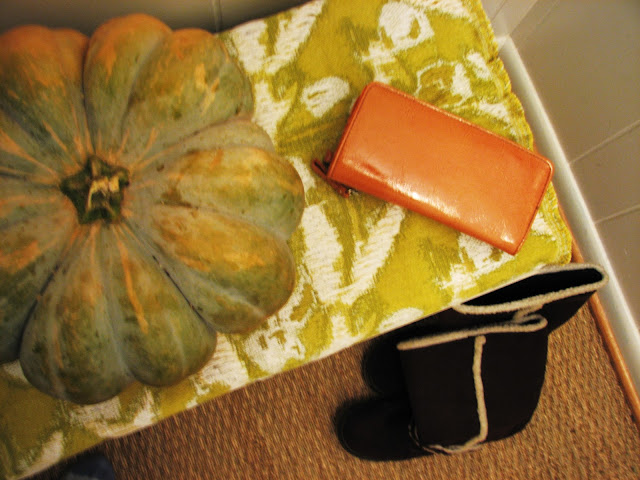 {I don’t remember the name but they still sell it & chances are Jan Jessup of CC will comment to let us all know-  thanks Jan! ;}
The photo is of my handsome father-in-law, John: 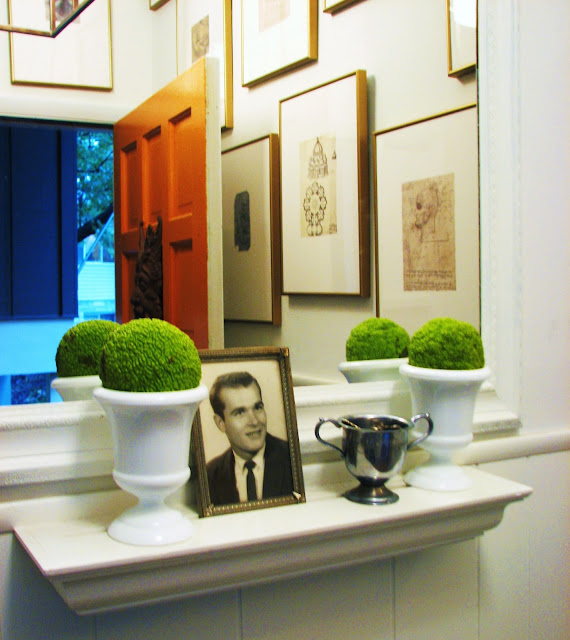 He thinks we only put it out when he comes to visit but here’s proof.  (Will that get me brownie points?? 😉
Lately I’ve also been loving this little creamer I found at a flea market which perfectly hides my messy wad of keys: 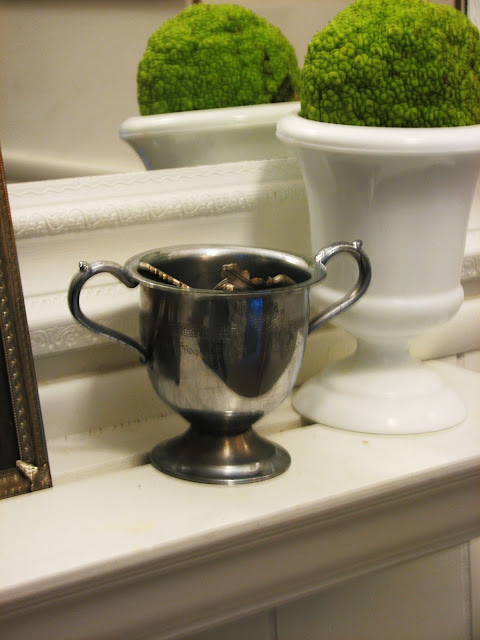 {Another “product” for my online store that I am keeping… oh boy}
Speaking of stores & what’s up with me, here’s the lastest.  I’m opening up an online store, “Pure Style Home” and am working on finalizing the web design and picking inventory.  I’m still having issues and my husband makes fun of me….  “HERE, PLEASE COME TO MY STORE….  I AM SELLING ELEVEN ITEMS.  OH WAIT?  YOU WANT THAT ONE?  NO THAT ONE’S NOT REALLY FOR SALE…  IT’S ONLY BEEN IN THE STORE FOR A WEEK.  PLEASE COME BACK LATER.”  So yes, I’m definitely opening the online store but am still having issues choosing exactly what I want to sell.  I know many of you have inquired about the rugs and yes, I will be putting them in the store.  The 8×11 handmade wool antique look sun-washed rugs are in the $3,400- $4,000 range.
Now, I mentioned that I was going to be joining with with my friend Elise of the Loudon Design Center to have a Pure Style Home store open on the weekends and this has changed a bit.  Elise is still planning on opening the store the first week of Decemeber but instead of having part-ownership of the store on the weekends, I’ve decided that it might be better if she carries some of my pieces…  We’re working on a line of fabrics & furniture and there will be one of a kinds too but the store will also carry a lot of other amazing companies like Hickory Chair & Sferra.  I would love to start this venture head-first and fully diving in, but I’ve realized that I really can’t spread myelf too thinly.  I need my family time and I know having a store of my own with my name on it would take up way too much time & energy right now.  We’re all hoping that having a separate store carrying a few of my things will be a good compromise.  We head to High Point tomorrow to square away some details.  So much is changing and so quickly, so I really don’t know 100% what will happen, but this is my new plan.  😉  I’ll keep you posted

If you’d like help creating a home you absolutely love, contact me about our design services.
ps- If you didn’t get to see my previous post on Market, check it out & let me know if you’re going!