I am a meat lover.
Pretty much always have been.
I especially love meat cooked on a stick.  (Brazilian BBQ anyone??) 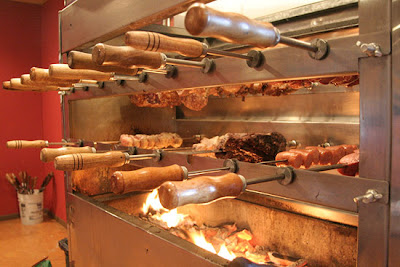 {image of Brazillian BBQ by Klaus}

When my husband & I got married, one of our favorite wedding gifts was the Showtime Rotisserie from my aunt & uncle.  (You know, the “set it and forget it” one??)  We use it all the time. 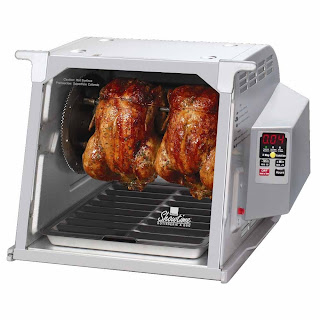 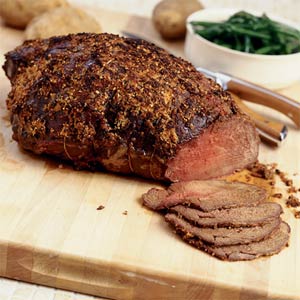 {image from here}
My dad’s side of the family has a thing for meat…  maybe one of the reasons I do.  In the cooler months (and during lots of the warmers) we like to have a “beef” on Sundays. 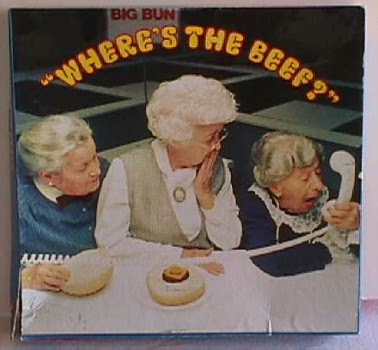 (one of our favorite sayings…  said most of the time in all seriousnes 😉
Sunday’s hot beef leftovers become Mondays sandwiches.  (If there are any leftovers.) 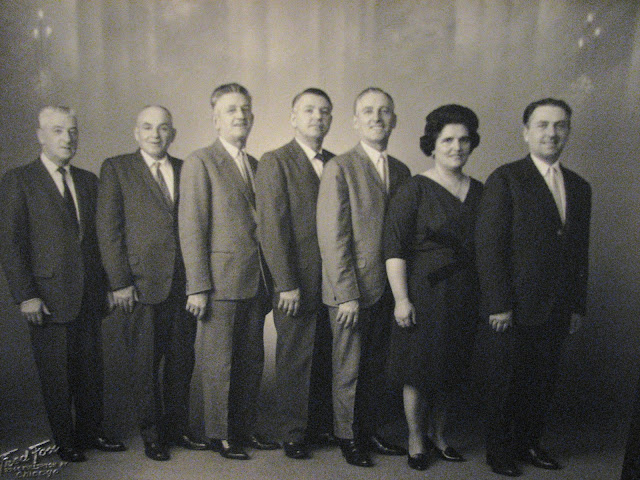 …A tradition my Nanoo (Grandfather) always followed.  He’s the one in the middle of his brothers & sisters in the photo above.  We all miss him and I often think of him most when I’m eating certain things.
The Maestranzi’s are kind of a loud, energetic type of family…  Eating is one of our favorite things to do and everything is centered around it. 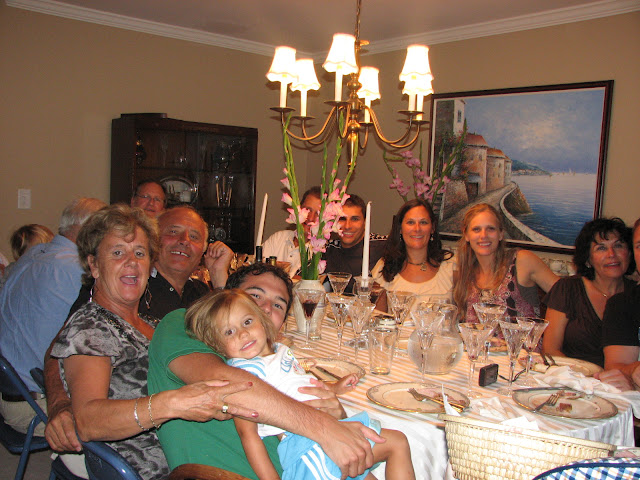 {some of us}
My cousin-in-law, Brian, (I think that’s his right arm & half an eye at the edge of the pic) has said he’s writing a book called The Beef, with a chapter for each Maestranzi.  He makes fun of how often “the beef” comes up in normal conversation.  “It’s always about the beef with you people!!!!!”
(But I think he secretly likes it.)
My favorite beefs were my dad’s cooked in the open Faberware set.  He used to pour salt & pepper & spices on it and say “abracadabra!” and tell my that’s why it was so good. 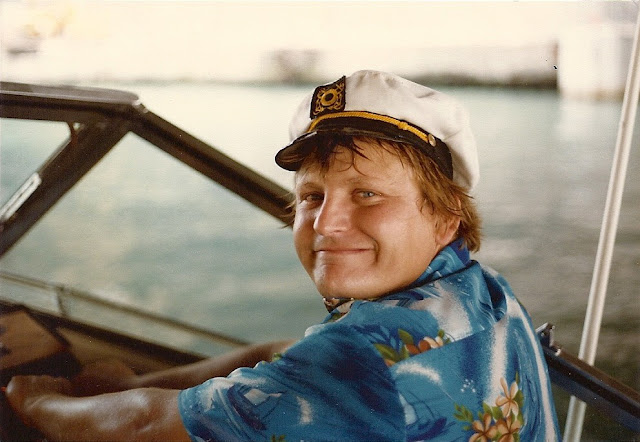 {My dad in the Faberware days}
And me: 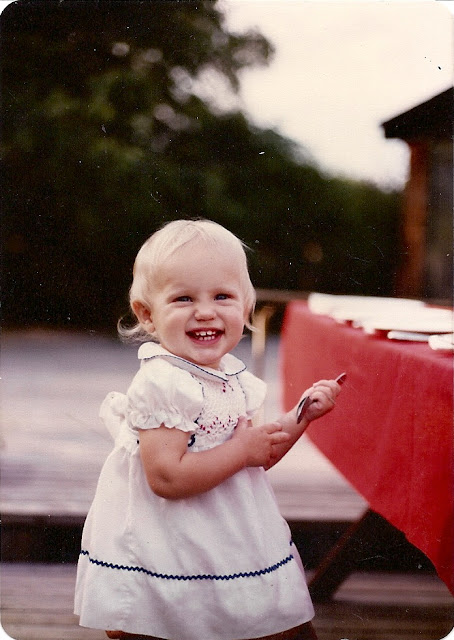 {“WHERE’S THE BEEF?!!!}
I now always say “abracadabra!!!”  when we do our own beefs in the Showtime rotisserie.
I’m lucky that my husband also has a thing for the beef & enjoys getting nice cuts at the butcher and cooking them.  (I’m more the eating-type.)  The best thing about our rotisserie is that you can “set it and forget it.”  It’s prefect for our boy-filled life because we can just pop it in & come back an hour or 2 later with amazing yumminess waiting for us.
So, it’s becase of “the beef” that I began searching for an range oven that had a rotisserie function for our new kitchen…   (You know those internet searches when you’re just begging to find that thing you want and all along you’re wondering why in the world no one makes it yet???)
I already had a round-up of attractive yet stll fairly budget friendly 36″ ranges I was considering…  I wanted something clean & functional-looking for our house.  I especially like ranges that don’t have any sort of rounded backsplash with buttons above the burners and I wanted square straight lines.  Here are some of my more budget-friendly finds:  (And “budget-friendly” is a relative term here because “professional” type ranges are more than the typical range.)
…
ikea 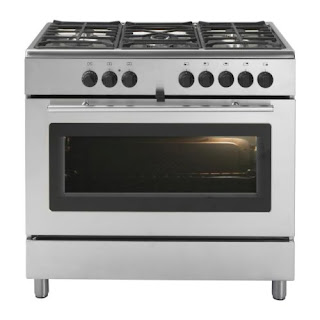 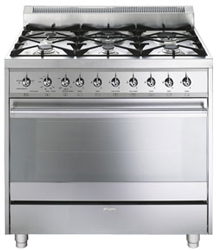 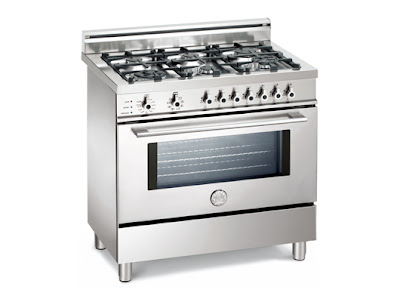 (I read somewhere online that it has the same “guts” as the Ikea range but that the knobs are metal vs. plastic.  I think it’s +/- $1000 more… It’s a beauty!)
I settled on the Smeg because of its look, price and reviews.  (Although, have you ever read through internet appliance reviews?? It’s all “Best purchase ever!!” followed by “Buyer Bewares”…  really always leave me wondering if I’m buying the coolest thing ever invented or a P.O.S.)
Anyway, I wasn’t happy with spending this much on an oven (the smeg) when this guy (below) was going to be sitting on my counter every Sunday, cooking its little heart out while the new range just chilled, empty:

..So I kept searching…
I had of course found a few… Thermador makes a wall oven & a few other high-end brands make them too…  (GORGEOUSNESS!!) But I don’t have room for a range (or an unlimited budget) & wall ovens so I  really wanted a rotisserie inside my range. I came across a list of the “top ten” rotisserie ranges…   some weren’t even rotisseries (because you know how internet searches are) and most weren’t so pretty… BUT!!!!  There was a SMEG on there that was beautiful!!  eeeeeeeeeek  Was it fate????
I started googling furiously and found out that Smeg did once make a range with a rotisserie.  Every time I followed a link to the exact model on online appliance stores, it came up as “discontinued.”  (It looks like the lucky Australians still have the rotisserie option but that the US ones are gone.)  I called local places with no luck.  I finally decided before settling on a range without a rotisserie that I would call the internet appliance stores and give it one last go.  On the FIRST phonecall, I gave them the model number off the discontinued Smeg to the salesperson so he could see if he had anything like it and I could NOT believe it when after a pause for magic stock-checking I heard:
“We actually have 1 of those left.”
I almost screamed, but instead I calmy said, “The A1XU6 Smeg Opera 36: Duel Fuel Range???”
“Yes m’am.”
“I’m so excited!!!” I yelled into the receiver.
The guy said nothing.
But that’s okay.
I was getting THE BEEF!!! 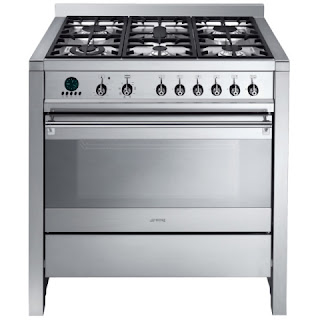 {The Smeg Opera…  Not exactly as pretty as the other smeg, but good enough in my book and it’s what’s inside that counts, right???  Especially if it’s rotisserie skewers!!!}
This piece of wondefulness is in my garage now.
I can’t WAIT to set it and forget it.

ps-  To any appliance companies out there listening…  bring on the rotisseries!!!
**update** thanks so much to  Heidi who let me know that Smeg is actually an Italian company, GO FIGURE!!  (I was just perusing the rotisserie functions available in Australia!! hahaha oh this lovely world of internet shopping!! 😉
If you’d like help creating a home you absolutely love, contact me about our design services.