Life has been so hectic lately but things are great overe here.  I feel like I can barely catch a breath (more the combination of work & under-construction-home-baby-life than the house itself) but I really am loving seeing everything come to life around us.  Our kitchen cabinets arrived & the frames have been installed!!!  It’s really starting to take shape!!!  Here’s what our kitchen looked like before: 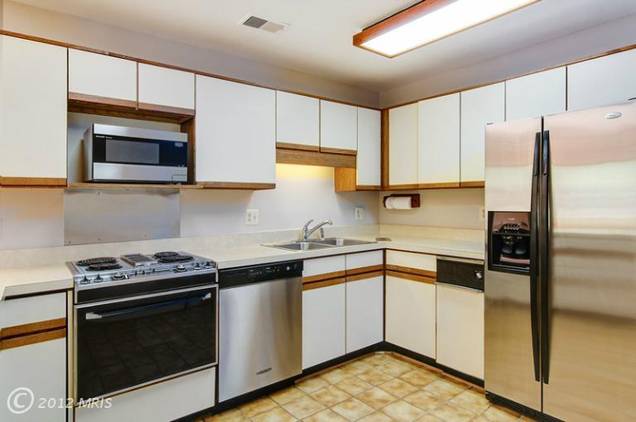 We completely removed the wall between the kitchen and the living room to create one big open room.  Here’s the wall “before”– 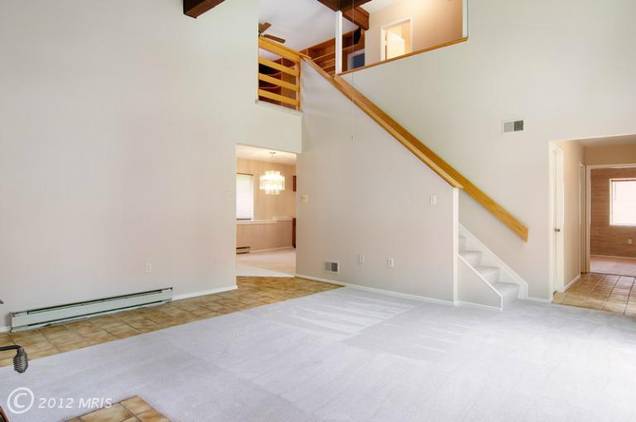 We, like most families, spend a ton of our time in the kitchen, so I wanted to make it a little larger and I also didn’t like the fact that once the wall between the kitchen and the living room was removed, you’d be looking at the side (sliced) view of both the kitchen & the dining room so I decided to move the kitchen wall two feet over (stealing from the dining room) so that the kitchen would span the entire width of the living room.  We also rearranged the general layout of the kitchen.  Here are the plans drawn up by CarrMichael Construction: 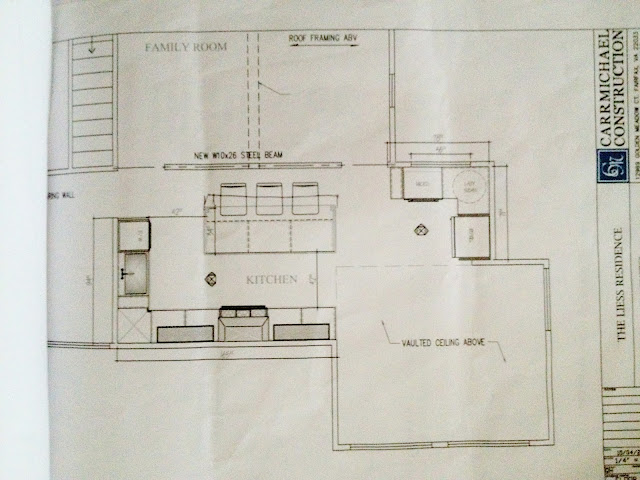 We got rid of the peninsula in the kitchen separating it from the breakfast room because I’ve always wanted a stand-alone island and because I wanted it feel more like one large space instead of kitchen & breakfast room.  The island visually separates the living room from the kitchen just the right amount & without it, I think it might feel a bit too much like you were cooking in the living room.

Mike (owner of CarrMichael Construction) has been amazing with helping us plan the kitchen and is really great with scale & space. (His wife, Tara, has been amazing too, in feeding us while our house is under construction!!  She’s also become a close friend and is the type of person who thinks nothing of last-minute late-night “emergency” shopping trips – yes I know a shopping trip isn’t ever really an emergency but to a post-pregnant lady with a photo shoot the next day, it feels pretty close!- and is always there when you need her.) 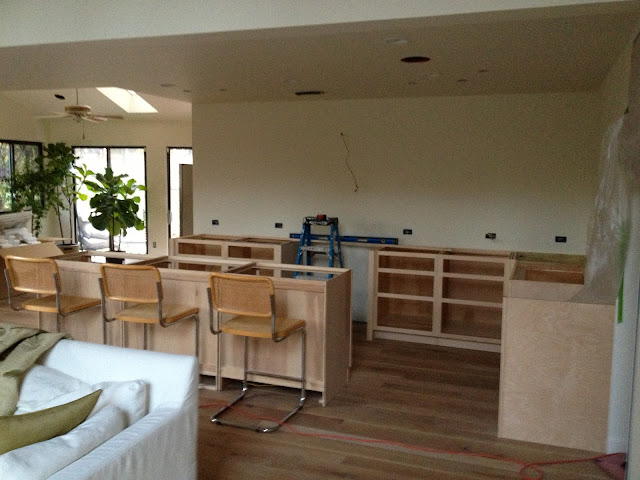 Here’s an example of the type of direction Mike gets on the kitchen from me: 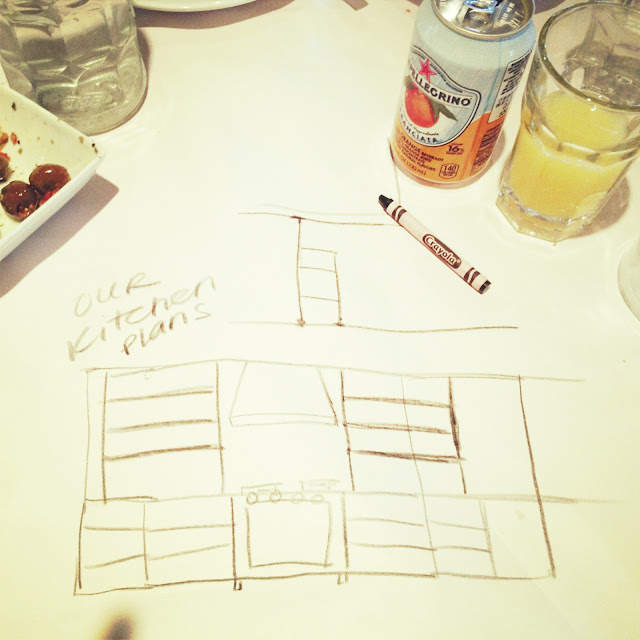 {nothing better than plans conceived while eating at a restaurant…  I think the first set of “plans” Mike got from me were scribbled on the kids menu of Uncle Julio’s while we were all out with the kids. }

…And then this is what he gives back to us: 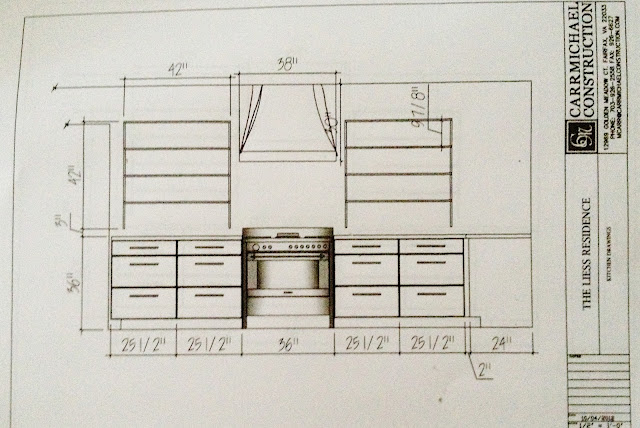 (I drew a little on the hood in the pic to show you the actual shape of the hood…  The draftsperson used a generic hood from the program that was curved & we’re going straight.)

..Just what I meant by the scribbled sketch = yay!!!

And this is what happens: 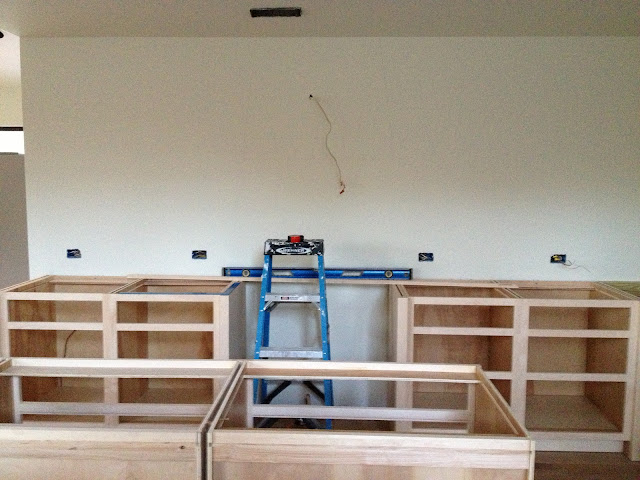 The island will be all drawers and will be built out of horizontal panels of reclaimed wood.  (Even on the drawer faces)  What you’re seeing in the current photos is the drawer boxes which will be hidden by the reclaimed wood panels.  I’m a big fan of drawers in kitchens (especially for kitchens with kids because they’re easier for them to keep organized & access) and so everywhere we can do a drawer, I’ve done one.  The island is full of storage: 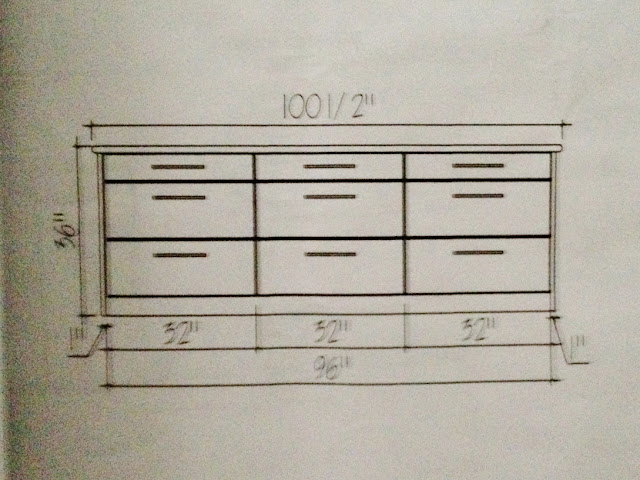 We’ve also been working with Tom Owens of Owens Iron Works in Herndon (who is also doing our stair rails).  The shelves will attach into the ceiling and into the marble countertop like this: (this is a side view) 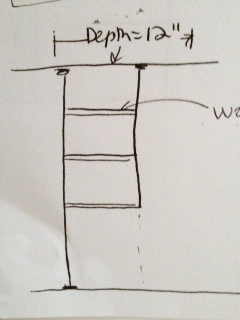 Tom & the team at Owens are true craftsmen & I can’t wait to see the shelves!!  We’ll have wooden shelves inset into the iron frame for a soft landing for dishes, mixing bowls & drinkware.
Here’s the view into the kitchen from the breakfast room originally: 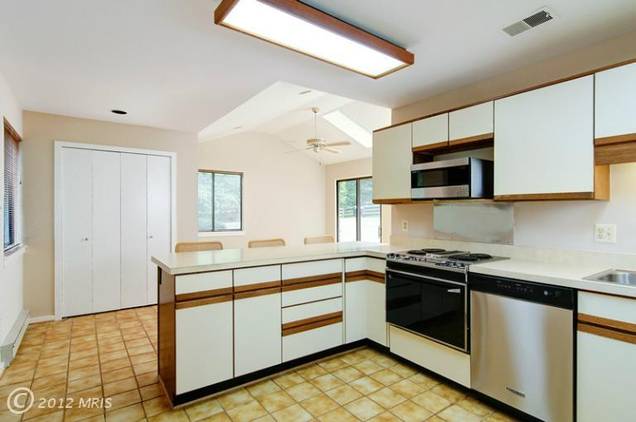 I thought & thought about how far away the fridge would be from everything else & finally deicded that as long as we found one with an icemaker & water, we’d be okay with it being so far from the sink.  Here’s the slot for our new (smaller) fridge: 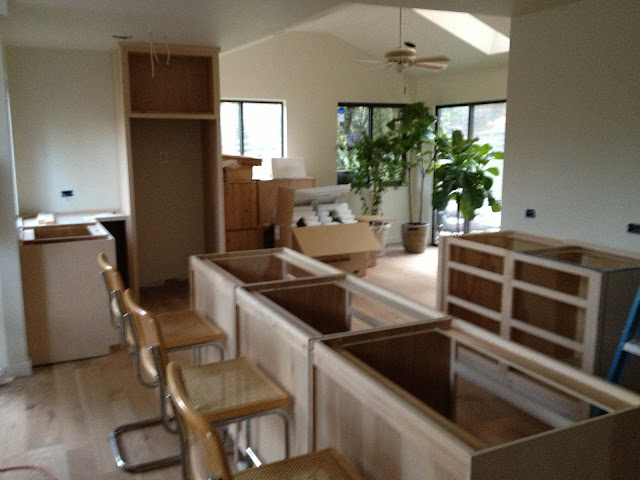 {We added a second window in the breakfast room for balance and because we wanted a better biew into the yard.  We’ve added windows wherever possible in the house.  It makes SUCH a difference and everywhere I look when I’m inside, I see outside.}

….Now that it’s in, the refrigerator actually doesn’t seem far away at all, so I am so happy we made the move.  It also helps to expand the kitchen itself beccause we added cabinets & a countertop next to it for storage & space to set down groceries and prep.  (A lazy susan is in the corner for our canned food.)  The microwave is under the counter beneath the window, which is great because now someone can grab something from the fridge, heat it up in the microwave and not even have to go near the main cooking area.

I’m selecting paint for the perimeter cabinets (drawers really) today so wish me luck!!  I’ll keep you posted!!  Also, thank you so much for the kind words about the FW Magazine cover…  It was a really fun experience!!