Hope you had a great weekend!!  We got the teensiest bit of snow (not enough!!) and hung around home for the most part.  The guys worked on our island and I’m loving how it’s coming out: 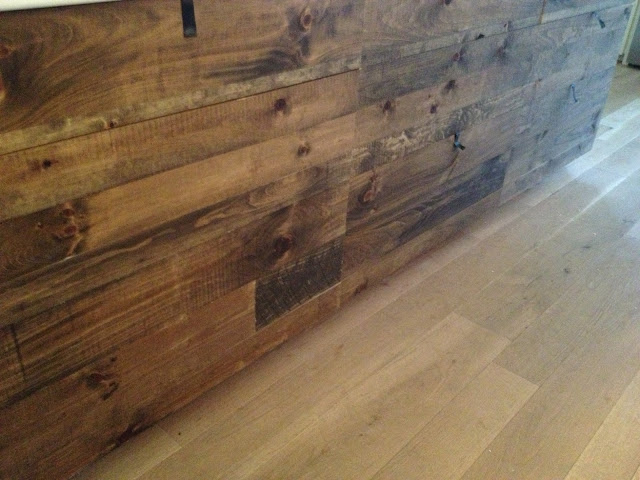 The reclaimed wood from Lorimer was applied horizontally across the drawer fronts.  It’s almost totally flat when you look at it and the guys did an amazing job of keeping the wood flush on the sides of the drawers.
Here, Spiderman is investigating the newly applied tape “pulls” on the drawers: 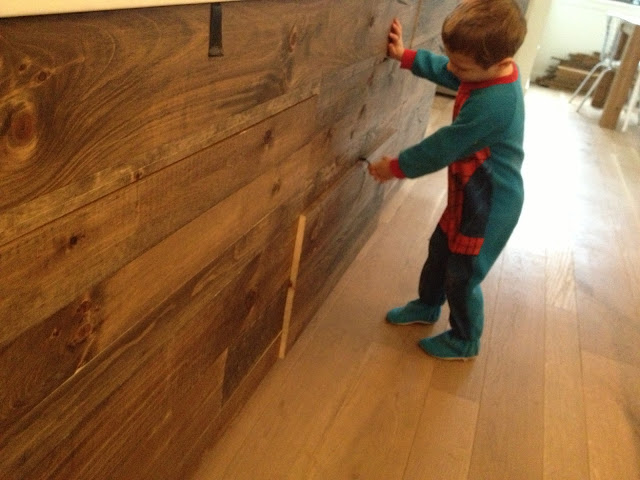 (This means he can now get into the drawers himself which makes my life easier.   The kids can grab cups and get water from the spout on the outside of the fridge..  They can ask for a snack and I can say go ahead & get it.  Ahhh drawer pulls- who knew?!!)
Anyway, they still have three more sides to go, so we’re only part way there, but I am so excited with the results so far!!  To read more abou the process, check out my last post here.
And finally, we have white honed marble on top of the island and I LOVE it.  It’s super-easy to take care of  and looks and feels so good.  I really wish it didn’t have such a bad rap.  (And I have two boys and a baby, we entertain a lot and we are faaaar from careful.)
In general I find that people (who’ve never been exposed to it & are listening to the stone companies)  are so afraid of using it & I feel like they’re really missing out on something special.  Yes, some things can stain it (red wine is the only thing I’ve noticed when it’s sat out for hours on there) but the stains turn into pretty gray marks… I don’t even notice them with the movement in the marble.  I’m actually dying to dirty this thing up a bit.  I’ve left so much stuff on it in the hopes of seeing what it would do and not much has happened though it’s definitely gotten prettier as it’s seen more use of the past couple of months.
Like what I love about most natural things, life changes it and makes an impression on it.
I don’t get why unchanging and perfection should equal beauty.  I feel the opposite.  (Except about my face haha!! j/k)