I’ve said it before but I really can’t believe how quickly time is flying by!  Our baby is due in less than two months and that seems nutty to me…
there are days when it feels like it’s around the corner and then of course there are the days when it seems like it will be forever until I’ll be
able to physically move quickly again! I’m feeling great though and can’t complain…  and dying to meet our newest little person!!

And I have some news about our TV situation… It sometimes hasn’t even felt real but I’m SO excited to share with you that David & I filmed a pilot
episode for an HGTV show and it was just given the go ahead to air!! It should air sometime soon
and I cannot believe it!! 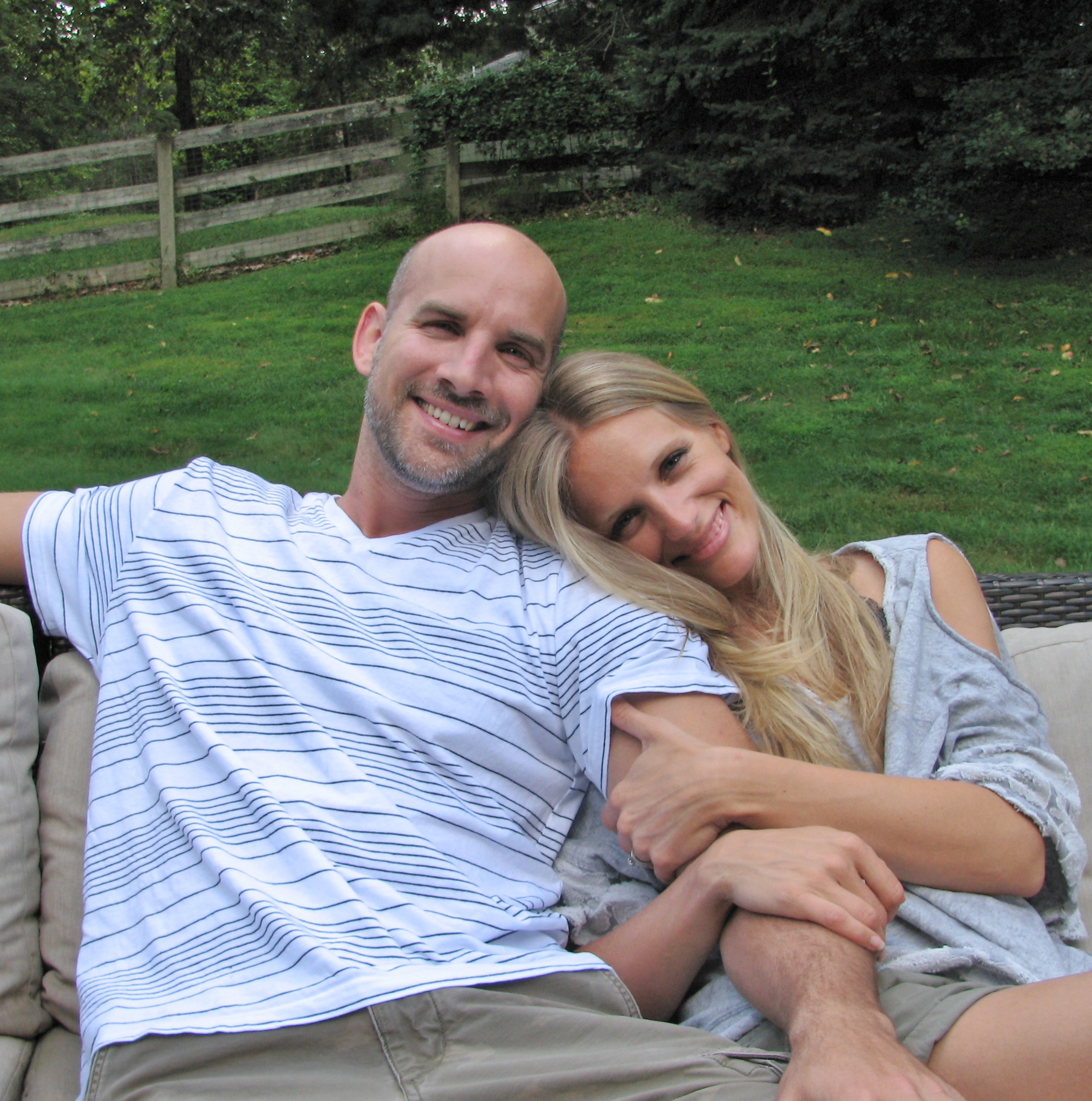 It’s been in the works for a while but it hadn’t quite hit us as something that might really happen until now. The process started in spring 2016 when
we were contacted by a production company (Collins Avenue) about the possibility of doing a design show, and as you might remember, we wrapped up filming
for the show about a month and a half ago- about a year later.

It was seriously creatively satisfying to get the chance to design, renovate & decorate a home on such a short timeline and we all (especially our
clients!!) got a major dose of instant gratification. I used mostly vintage and ready-made furnishings (with a few special custom projects thrown in!)
to meet our deadline and it was such a blast.

As far as I understand it, it has to get a certain # of viewers when it airs to go to a full season.  We had NO idea what to expect in the beginning
of all of this & were definitely a bit nervous, but everyone from Collins Ave & HGTV has been so awesome and it literally could not have been a better experience for us. We had so much fun working with our super sweet clients & crew and- whatever ends up happening- we’ll always
be glad we did it.  As SOON as I know the air date and title, I’ll let you know…  I will definitely need help spreading the word!!

And on the home front, we’ve been making some serious progress…  For starters, we put in a (very late!) kitchen & cutting garden in our backyard a couple of weeks ago.  We (by we, I mean David 😉  worked the soil a TEENSY bit but not like we should have.  And only one one side of the garden…. we’ll have to get to that later.  Our veggies are smaller than any I see driving by & I have vegetable envy BUT it’s a start and I’m thrilled to be even that far right now.  We don’t have quite the sun we’ve had for past gardens so I didn’t really want to invest too much time, energy or money into it until  we see what we’ve got going on.  I anchored the garden in limelight hydrangeas and figure if the veggies don’t work out well, I can always enjoy the flowers.

We mostly finished our basement this past week, which has changed EVERYTHING.  (Years ago I could have cared less about having a basement, but with
the four kids & counting, it’s been a life saver…  a kid zone for rough-housing, toys & movies has been so key for us.  We keep
random toys like puzzles, play doh & crafts on the main level but the lego situation can just get out of hand and I love that they now have a place
they can really just go crazy in.)  Our house has been like a game of tetris and finishing the basement was the key…  We emptied our completely-packed
garage of all of the furniture, books & boxes for the basement and can now get cars in!!!  (And not have to worry about towers of boxes falling
on us!!)  It just felt like a huge exhale.   Our basement was originally unfinished (& even had a resident snake!!) so we’ve gained  a
ton of unused space & function for the family. 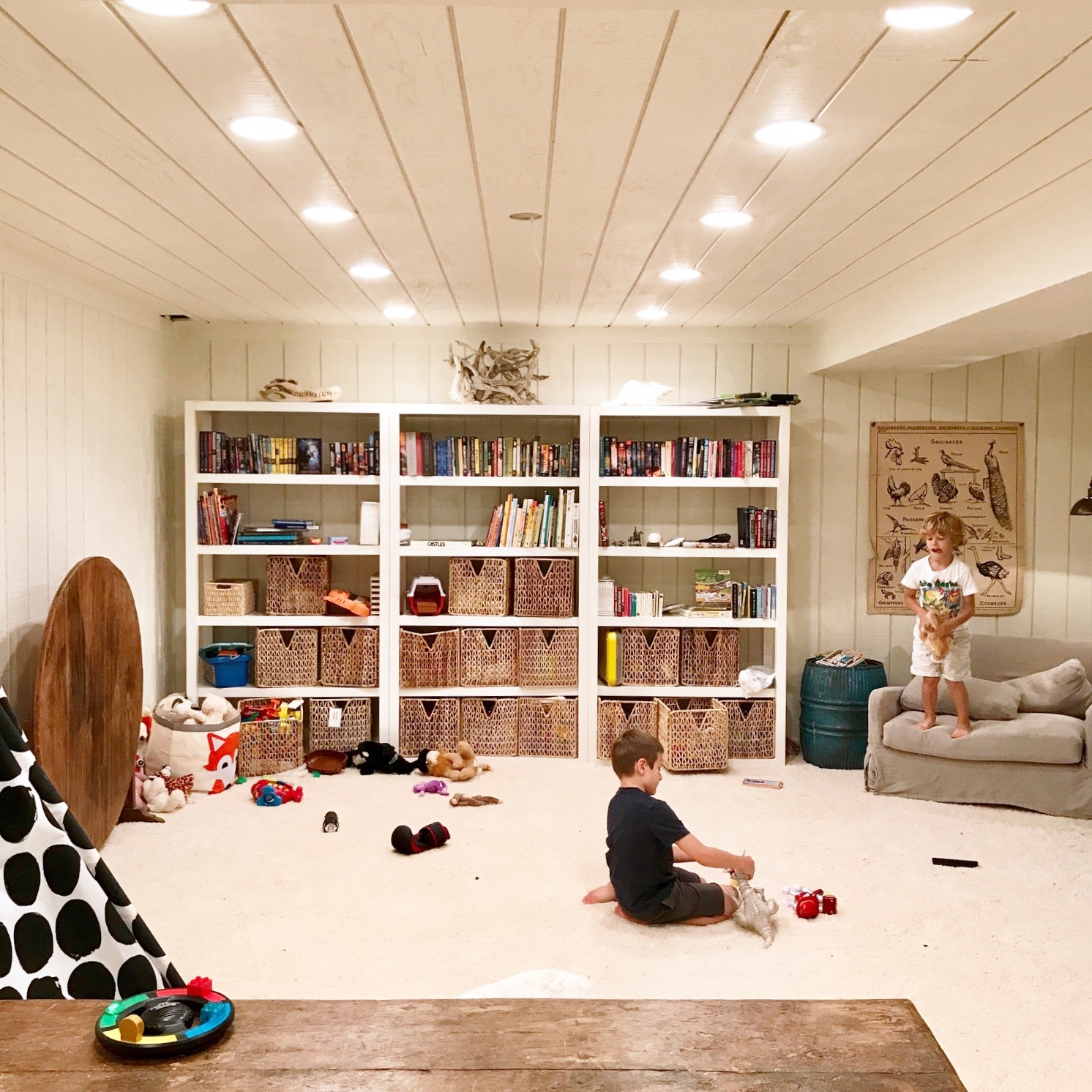 {We went with painted pine paneling on the walls & ceilings & David trimmed it out in 1x4s.  It was really nice to not have any drywall to
deal with and it feels really cozy down there.  We added a little guest bedroom with pocket doors and created a space for a future bathroom though
we’re not dealing with that for a year or so.  (We really want all construction over before the baby gets here & don’t want the expense right
now.)   I’ll work on making it cute later, but for now, we’re in heaven…  our kids would move down there if they could 😉

Our kitchen is complete construction-wise and now we just need to do a few little things like sew a skirt for the sink and install some of the missing
hardware.

And I’m decorating a shared nursery for Gisele & the new baby this time around.  (It’s been a couple of babies since I’ve actually “designed”
a nursery so I’m really excited about it.  Literally just wasn’t feeling it before… maybe because things felt so temporary.)  We don’t
know if we’re having a boy or a girl but we plan on having the kids share for a few years either way. The nursery will definitely be on the feminine
side but he/she will be fine.

I’m using my new wallpaper, “Gisele’s Web” in yellow (her favorite color- the girl is obsessed) on the walls & ceiling…

{a pic of the fabric version of the paper}

…and went with a bent wood “big girl” bed for Gisele from Serena & Lily:

I had thought she’d be ready to transition to it by now (all of our others had climbed out of their cribs by 1-2 yrs old) but she’s seeming really content
in her crib and we’ve decided we’re not going to rock the boat on this one so we’ll get another crib for the new baby if she’s not out of hers soon
(I value my sleep highly and if I can get an additional 6 months to a year without a two year old waking me up in the middle of the night, I’ll
take it!!)  So for now, the bed’s pretty much just her trampoline and occasional napping spot.

I’m also working on the younger boys’ bedroom right now…  It’s a dark room with cool angled ceilings and we’re doing a paper in there too.  I
was kind of shocked at how sophisticated their choice seemed.  I was thinking cute foxes & raccoons/ something fun & quirky…  They
loved the idea of trees so it could feel like a forest and when we were hunting online we came across this stunning mural for sale at Anthropologie: 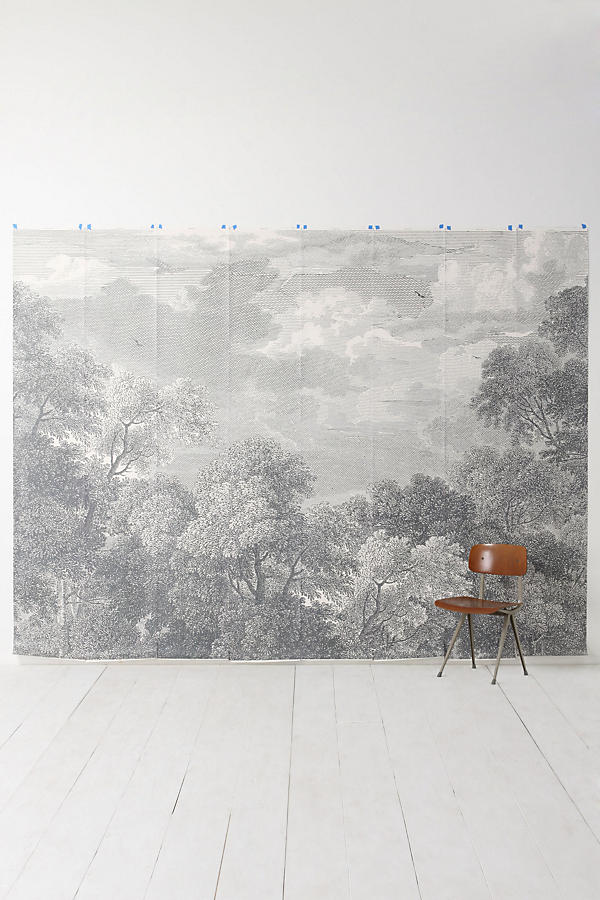 Justin was so excited about “the clouds.”  I’ve wanted to purchase this mural for years for something/ anything but just haven’t had a project for
it yet.  But it’s a little weird to me that it might be in my kids’ bedroom.  We called in Louie, our five year old, to see which his favorite
paper was out of the ones we’d found and he also picked the trees/ clouds picture on his own.  I asked him why and he said because the clouds
reminded him of the beach.  Go figure.  We sent the idea to our wallpaper installer, Michael, to see if it would even be doable (it’s a mural/
not a continuous paper) and he thinks it will be difficult/ messy.  We’re simmering on it because I was really hoping for something straightforward
(and honestly a little cheerful lol!!) and easy to get done and this definitely wouldn’t be that.  The room is approx 15’x15′ and the mural is
12′ wide so it wouldn’t line up well.  I’ve got to decide how much the non-lined up transitions would bother me and/or if I should consider some
sort of 18″ corner treatments to make it work.  And then there’s the entire issue of the ceiling… I had wanted to envelope the entire room in
something and getting clouds only on the ceiling would be another nightmare for Michael’s install.  I showed them the Fornasetti Clouds paper
(below) which I love but have used before & is everywhere and they liked it but not as much as “the clouds AND the trees.”  Anyway, there’s
that room in a massive nutshell. 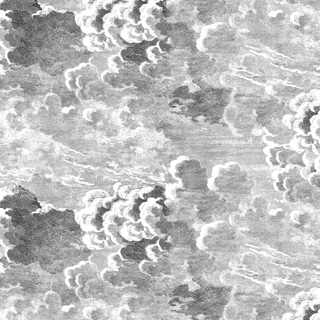 Our master bathroom is fully functional & we’ve just got to paint the trim and I need to pick out the pendants.  (Are you seeing a trend here??
We’ve got a little left to do in almost every room but we’re finally functioning!! Sort of.. our AC broke and it’s been HOOOOT.} This has been one
of the most drastic makeovers in our house because it was an unfinished storage space when we moved in.  It’s one of my favorite rooms in the
house now:

It’s like a little peaceful getaway (sort of- Gisele is my shadow right now but I wouldn’t have it any other way!!) and it’s such an empty textural space
that feels so clutter free I can just let my mind go blank.  We went with a hammered copper tub and waterproof plaster walls by merlox.

And speaking of tubs, we recently installed a project I’ve been excited about all year.  The architecture is by  Bennet Frank McCarthy & the renovation was done by Impact: 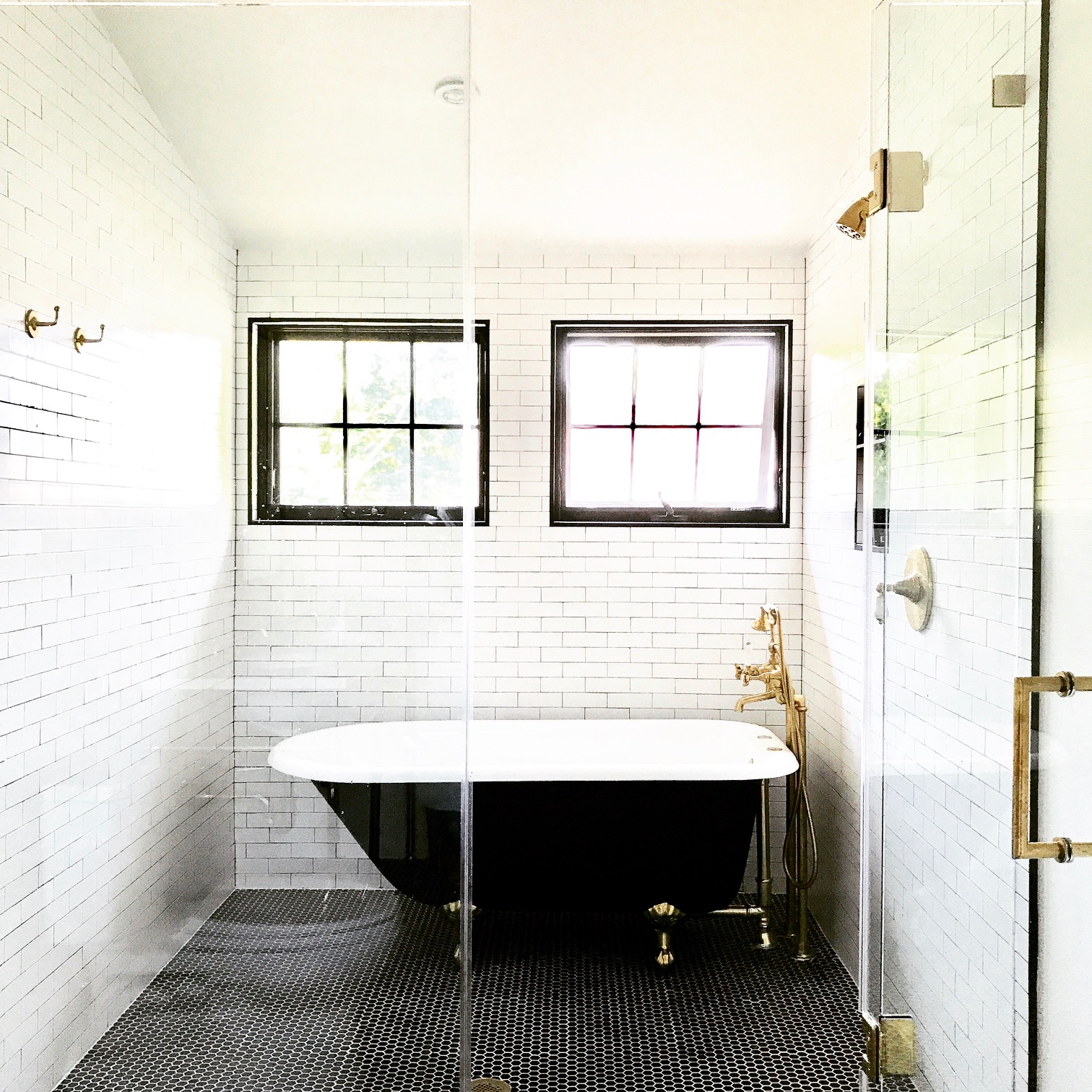 {If you follow me on Instagram, you’ve seen these photos before, but this is a walk-in shower/ tub space that we wanted to feel modern yet historical as it’s in a historical home in the city.  We went with black pennyrounds & black tub to make it feel a bit edgier and then brought in classic unlacquered brass fixtures & historical flat subway tile by Heritage Tile.}  We did the kitchen, family room addition & master suite too and I love how this house turned out!!  Our clients were incredibly trusting and really let us run with our vision for the home.  I can’t wait to get some professional photos to actually do it justice!! (sorry Iphone)

Anyway, I’m off for the day but will keep you posted on our HGTV show air date!!  For now, we’re focusing on getting as much of our house finished
as possible before the baby arrives so we can just chill & focus on enjoying him/ her with the kids.   Hope you’re having an amazing summer
so far!!