It’s that time of year (depending upon where you live, this post could be a little early!) when my favorite weeds, Queen Anne’s lace and Wild Chicory, are popping up alongside of roads, in fields & generally anywhere there’s untended dirt. 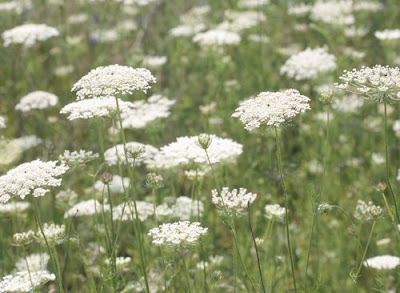 One of my favorite flowers (if not favorite ) is Queen Anne’s Lace. It was named after Queen Anne, who was adept at lacemaking. Many of the flowers have reddish/ purple blooms in the center and it’s said that it’s a drop of Queen Anne’s blood from pricking her finger while making lace. 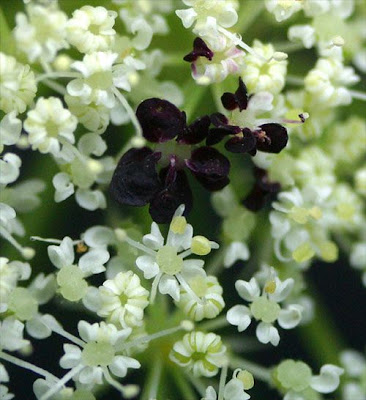 Queen Anne’s lace is really special to me & reminds me of summertime, visiting my dad in Illinois, where the sides of the roads are covered in Queen Anne’s lace & wild chicory. The field across from our family’s longtime summer cottage/ lakehouse is filled with them & I used to pick them when I was little with my grandma & cousins. My dad actually moved into the cottage about 10-12 years ago & so we still go there every summer. (This is the house I’m always working on, kitchen here.) Here’s the table set last summer with some fresh Queen Anne’s Lace & some of my Grandma Maestranzi’s china: 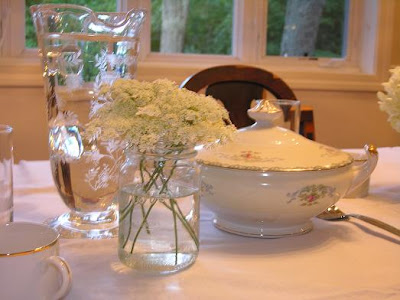 It doesn’t last long when you bring it inside, but it’s worth it to me. And, my other favorite “weed” is wild chicory (below). 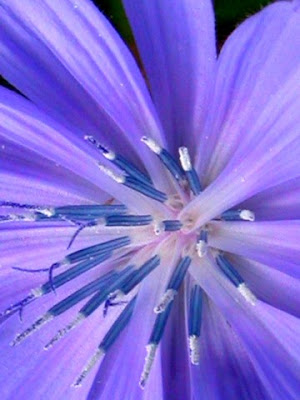 I can’t get over its color & again, it just gives me this nostalgic feeling whenever I see it. An herbal tea of it, taken a couple of times a day, is said to help your metabolism according to old herbal lore. I used to love picking the flowers & drying them out for the tea, but to be honest, I wasn’t really into the tea & enjoyed making it & the pretty packaging for it more than I did drinking it. I think I still have a a 15-year old homemade box of it somewhere. hahah 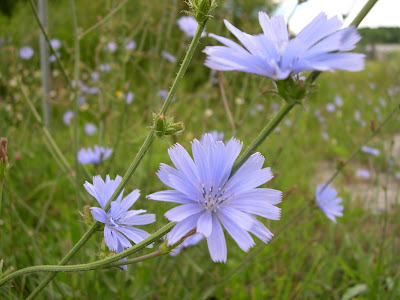 (image from here)
Anyway, if you haven’t glanced at the roadsides lately, take a look. There are so many beautiful “weeds.” The best part is, we’re going to Illinois in August for a couple of weeks and just as the flowers start to fade here in Virginia, they’ll be in full bloom there. Can’t wait!!
And don’t forget how much of life this quote can be applied to:
“What is a weed? A plant whose virtues have never been discovered.”
-Ralph Waldo Emerson.