Skip to content
Skip to content
I hope you’ve all had great holidays!!  Christmas just seemed to fly by this year for us though I’m loving the week of nothing we have planned ahead of us.  I thought I’d share a few snippets of our place decorated for Christmas (and by “decorated for Christmas” I mean we have a tree up, set  tables for a family Christmas Eve party and put bits of greenery around) and of what we’ve been up to.
This Christmas felt more last-minute than usual.  (We started shopping on the 23rd.  Not recommended.)   Hence, the completely unironed linen tablecloth in the pic above… don’t judge 😉
And yet another year has gone by where I missed the Christmas card window.  I have to say, seeing so many Christmas pics the day after Thanksgiving on instagram and on blogs, I felt behind from the very beginning of the season, which I know is ridiculous.  It’s kind of like the retail timeline has pushed us all forward a little and now with social media doing the same, everything seems to go by even more quickly.  I know feeling on top of things or behind is totally within my own control but I have noticed a subtle change since I’ve been more synched up with social media.  I’m trying to work on not getting swept up.
Like most kids, our boys are obsessed with Santa.  When we saw him at the mall, Christian, 7, was so excited – which means lots of bouncing for him- and couldn’t stop laughing- like out of control giggling- when he looked at Santa from the line.  I loved it. 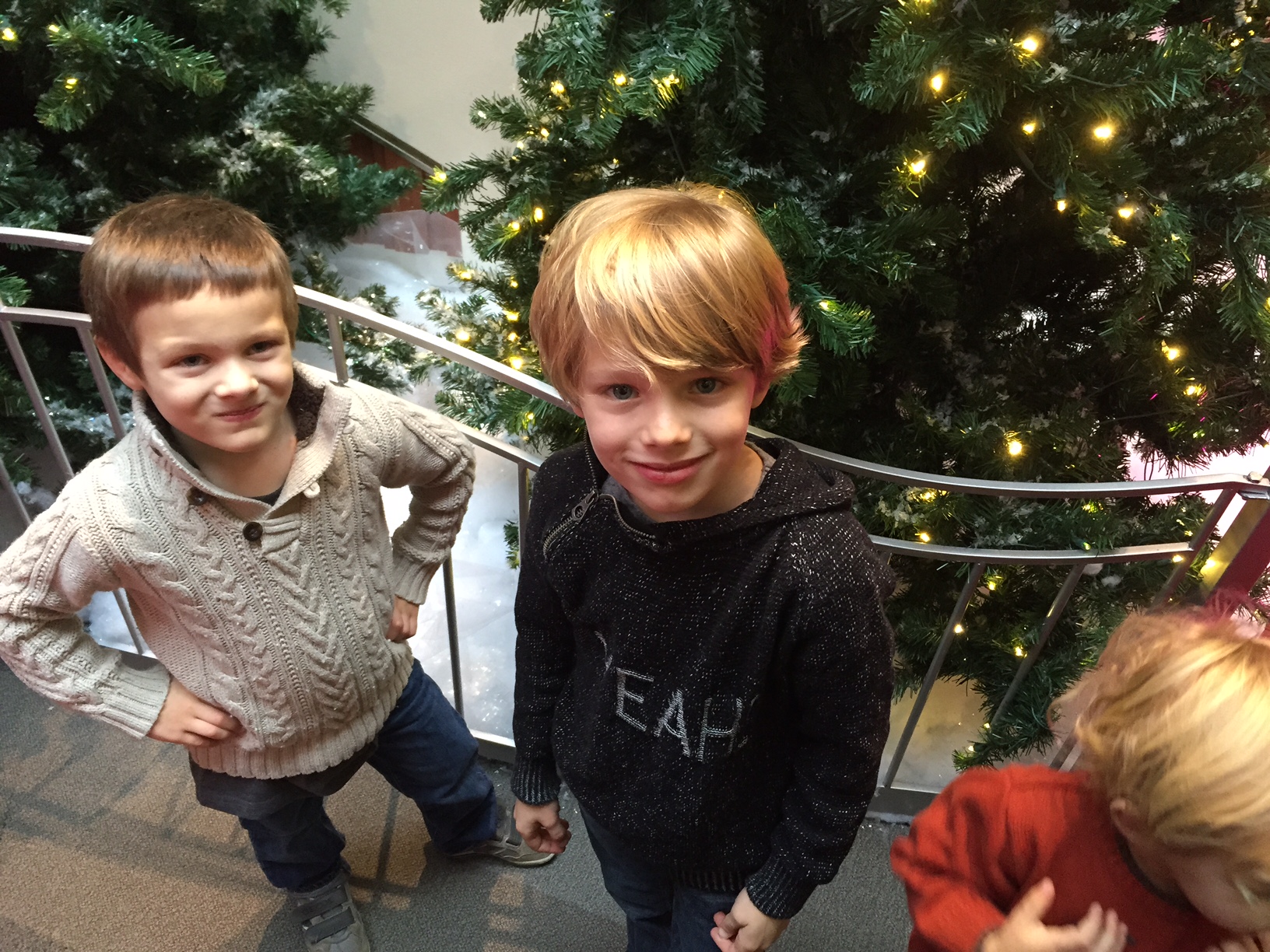 We ate waaaaay too many of these this year: 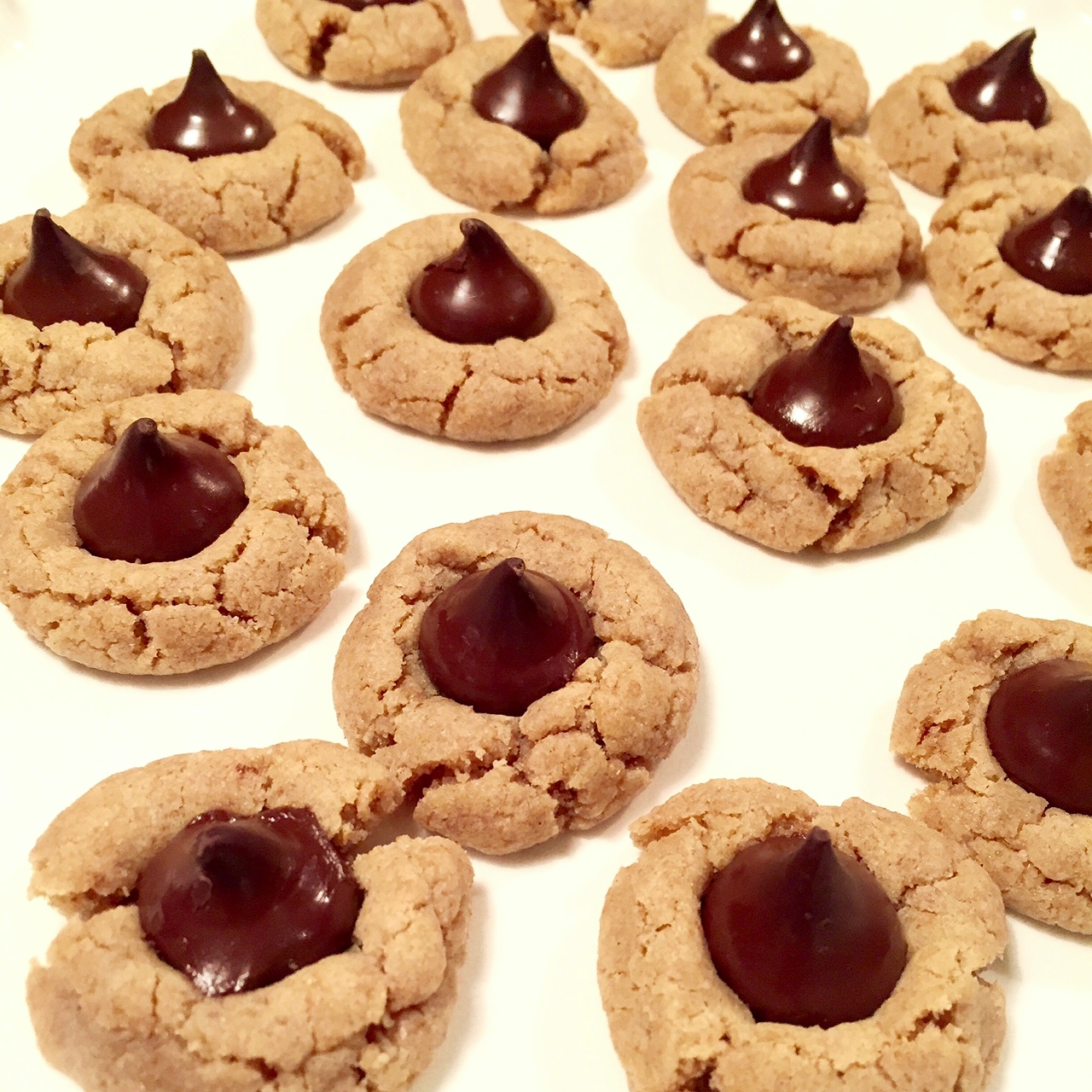 And I’m feeling great with baby #4… 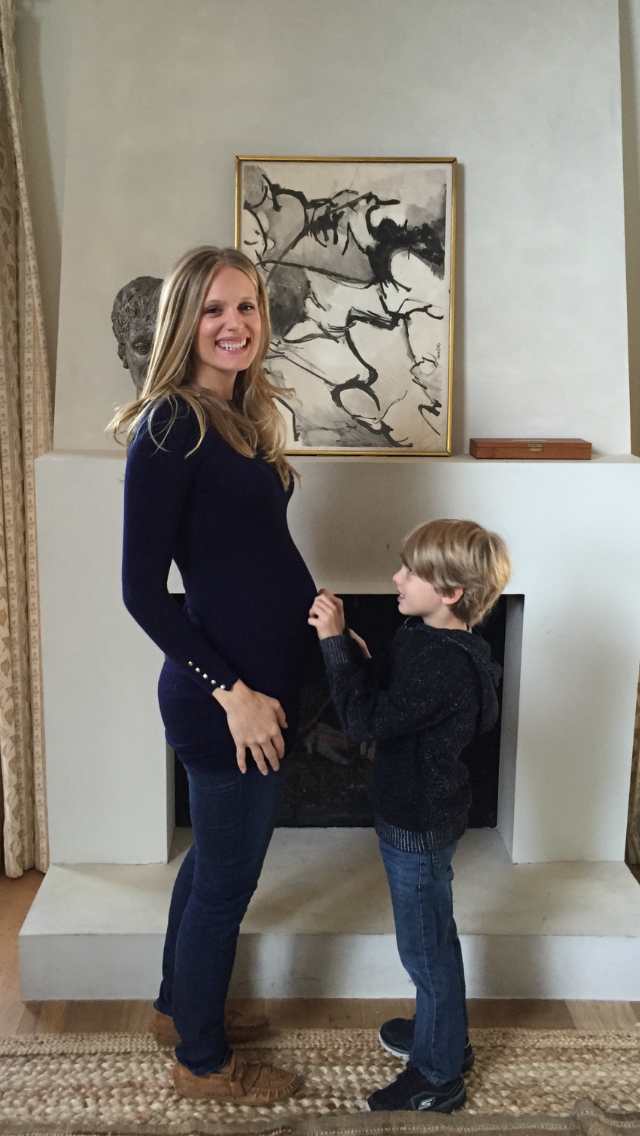 … though he/she is probably having trouble finding room in there with all the FOOD I’ve been consuming.   I’m at the 5 month mark today and I can’t believe we’re going to have another one in a few months!!  (We’re going to start converting our family room into a temporary nursery soon…  Nesting is NOT kicking in for me this time; I feel SO done with projects.)
We’re loving all the downtime with the boys. 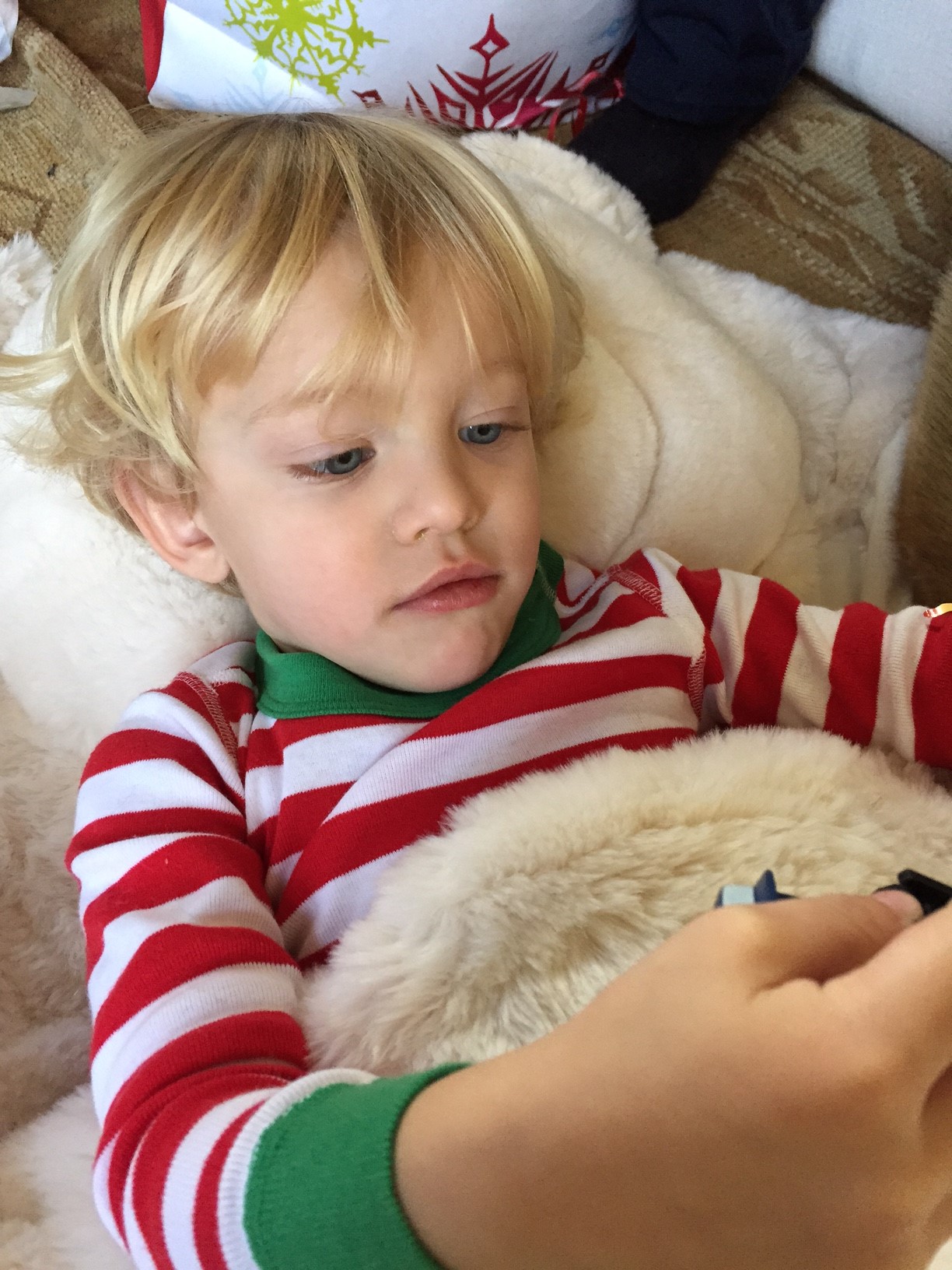 {Lou, 2}
I attempted to make shapes out of pb&j’s for them the way my grandmother used to for me when I was little…
I love Christmas break because I feel like I finally get the time to slow down and do stuff like that with the kids.  We even did “Chistmas craps” (Christmas crafts as said by Louie, 2) which really just consisted of paper, crayons, markers and lots of glitter and whatever we felt like doing with it.  (Of course forgetting to give out the “craps” at Christmas.) I’m also attempting to have photo albums printed from 2010 on this week… I’ve been behind.  (iphones really messed me up because in the past couple of years I pretty much switched to them for pics and the quality just isn’t as good and I’m not as organized with the photos.)
Here are a few more pics of our Christmas Eve table:
It’s a little “cuter” than I normally like things but I couldn’t resist the little German glitter houses/ churches that were on sale at Pottery Barn and that remind me so much of my Grandma Maestranzi’s vintage Christmas town out of glitter houses and “snow” and trees…  Nostalgia is weirdly irresistable for me.
Tea lights and evergreen branches from the yard were simple and easy:
Our pup/ old girl has been spending her days snuggling in all of the blankets and sleeping bags that have been out in front of the fire:
…And we’ve spent lots of days and nights of reading and doing nothing in front of the fire. (We’ve also watched more “Reign” episodes than I should admit…. LOVE the costumes!!!) 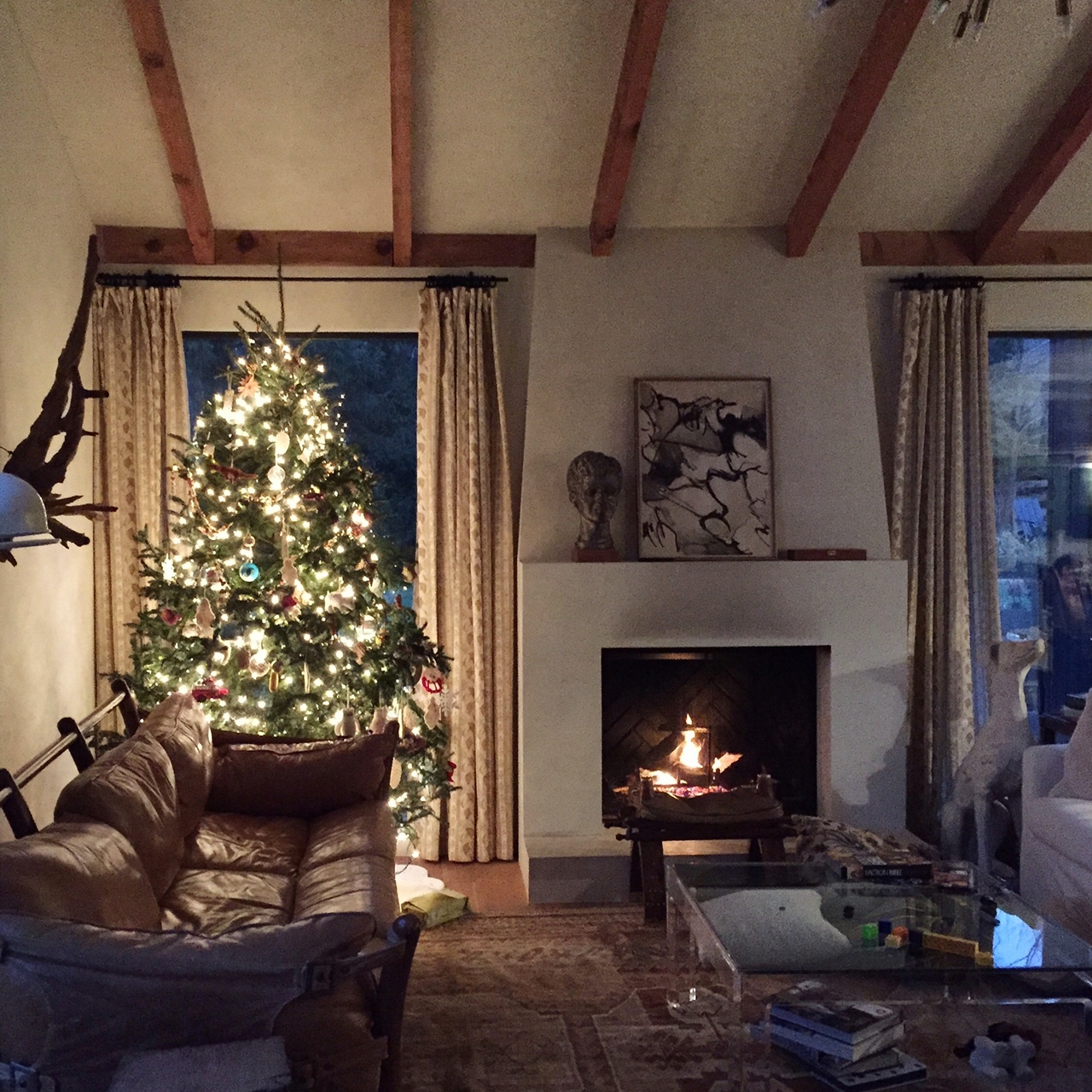 Anyway, I’m off for the evening but have a really happy New Year’s Eve & I’ll be back next week!!  Hope you’re getting lots of quality time in with the people you care about!!