Happy Almost-Spring!!  It’s been a while since I’ve been able to sit down to do a blog post but I thought I’d pop in quickly to say ‘hi’!  Life
has been on fast-forward for us lately and working full-time with five kids has been an adjustment.

If you’ve been following me on Instagram, you’ve probably seen me posting pretty frequently about our geese.  It’s been a tough winter and we lost
both of our 23 year-old geese, Hansel and Gretel.  I just deleted a portion of my post telling the whole story over again because I’m realizing
I just don’t have the emotional bandwidth to go there right now.  (If you’re interested, it’s all on my IG feed.) But the good side of it is,
we have a new female goose, Simone, who is a doll and is starting to warm up to us after a month or so, and we have TWO eggs incubating right now with
Hansel & Simone’s goslings.  (Gretel was killed by a fox in January and we got Simone for Hansel so he wouldn’t be lonely, they mated immediately,
and he died only three weeks later of natural causes… honestly I think she exhausted him but he died happy 😉  Anyway, so along with our normal
routine of kid-work-crazy-now pre-production for filming the TV show,  Dave has been rotating goose eggs and our fingers are SO CROSSED that we
can get these goslings out & alive!!  We are SO EXCITED because they are due NEXT WEEK!!!!

{These babies are like little dinosaur eggs!! I have big ol’ manhands to give you an idea of scale!!}

And we’ve also been consumed with the pre-production process for our HGTV show, Best House on the Block.   The production company has
selected almost all of the projects and I’ve been designing like crazy and visiting potential houses for the past couple of months.  I know a
few of you have emailed or sent me messages asking for us to pick you, but the production company and the network are in charge of selecting the projects
for the show and we design for the clients they select.  They send us on house visits for the houses they are interested in featuring and then
I come up with very general plans for how it could be done and then they decide if it will work for an episode or not. Once a project & its scope
are approved, I design it down to every last detail.  Working for TV is different from how we normally work in that there are so many constraints
that I normally don’t have to work with- mainly TIME!!!- that limit what we can do in the renovations.  These homes are all being renovated in
only 4-5 weeks, so many things and projects just aren’t possible on that timeline.  We 100% refuse to do anything less than quality work/ cut
any corners so getting a realistic scope of work laid out is key.  We’ve been working around the clock with our contractor, Mike Carr, to get
everything ordered in time for the show, which starts filming in just 3 weeks.

We’re also installing a couple of projects with our design firm this spring and summer that we’ve literally been working on for YEARS and I couldn’t
be more excited about that!!

I just returned home from a whirlwind trip to Florida to finish up the furnishings for cousin’s house and it feels like a massive weight has been lifted
off my shoulders. To read about the project, click here.
You might remember when I first posted about it, it was a bit controversial because of how crazy massive it was and that was a turn-off for many readers
whereas others felt “to each his own.”  I totally get both sides of it.   (Unfortunately, when I switched blog hosts, the old comments
didn’t move over, but it was SUCH an interesting chain of comments that I really need to try to see if I can get it back.) 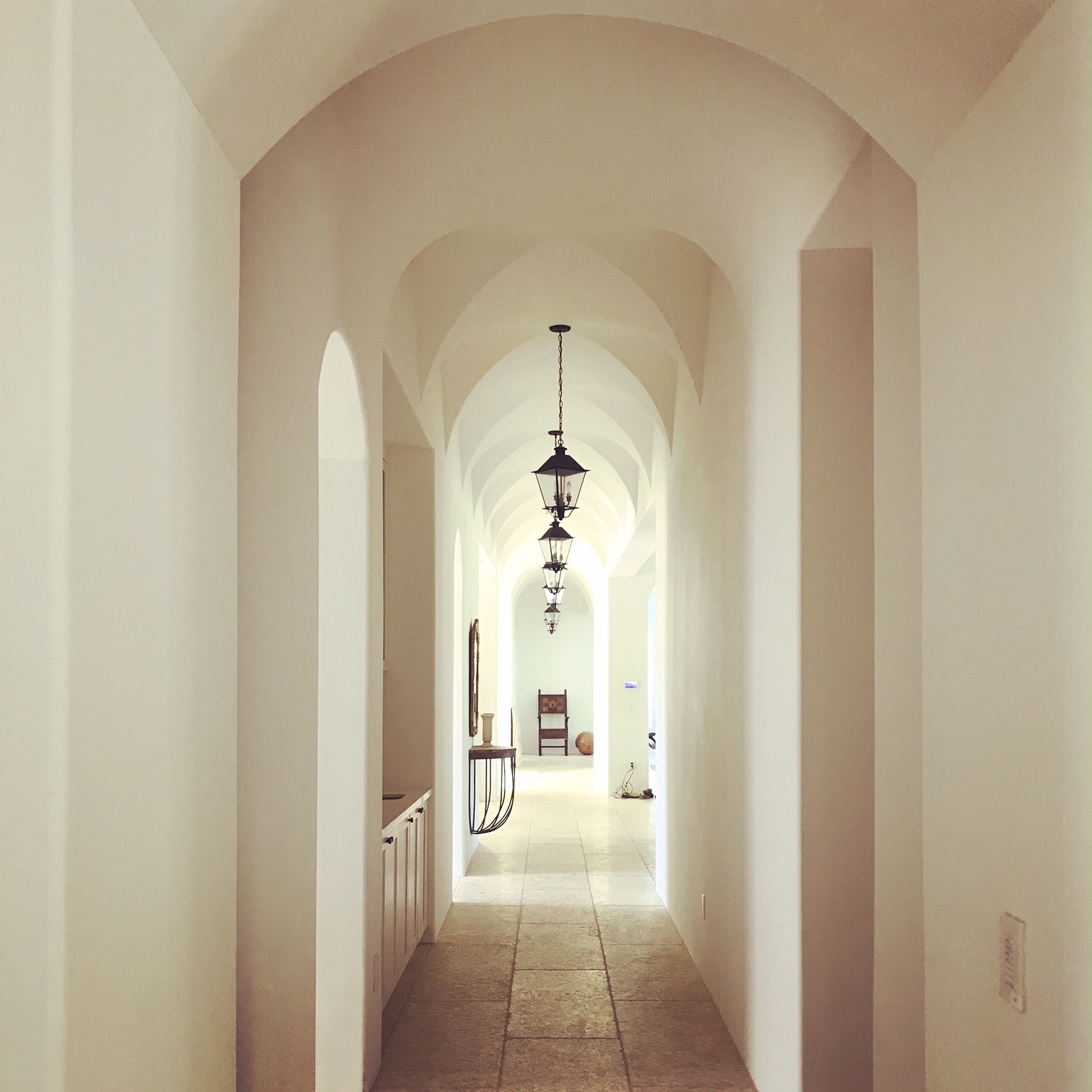 {One of my favorite parts of the house is the long center hall with groin vaults.}

We joke that we’re visiting a resort when we go there and the kids never want to leave.  My cousin hosted a wedding for a friend there this weekend
& it was amazing to see the house being used as it feels like it was intended- for entertaining & hosting.

And, Aurora is almost seven months old now!!  She’s such a sweet busy little thing and is always smiling.  The kids are doing well and we’re
attempting to keep up with their budding social lives & school commitments. (OMG it’s nuts!!!)

Anyway, I’m off for the day, but wanted to stop in & say hello! Take care, and if you’re interested in more frequent updates on what’s going on over
here, my Instagram handle is @laurenliess ! Talk soon!!