Okay, I LOVE Halloween.  I always have.  When I was in preschool my grandmother made me a “Glinda” costume (from the Wizard of Oz)…  It was shiny pink with star sequins glued onto it.  I felt so pretty and special and wore it waaaaaay too often after that.  (Walk in the woods anyone?  Let’s put on the Glinda costume!)

I’ve dressed up almost every year of my life (even in high school when it wasn’t cool anymore…  knock Knock…  “Trick-or-treat!”   “Um, aren’t you a little old??”)  Yeah, so…  I get so excited planning costumes & parties and making sure everyone’s got their costume covered.  (I’ve been known to make housecalls for those in desperate need of costume help.)  When I had Christian (at 25) it was a little harder to get into it but we stayed strong with a warrior party at our house… {Just the girls}
And the following year we did superheroes… 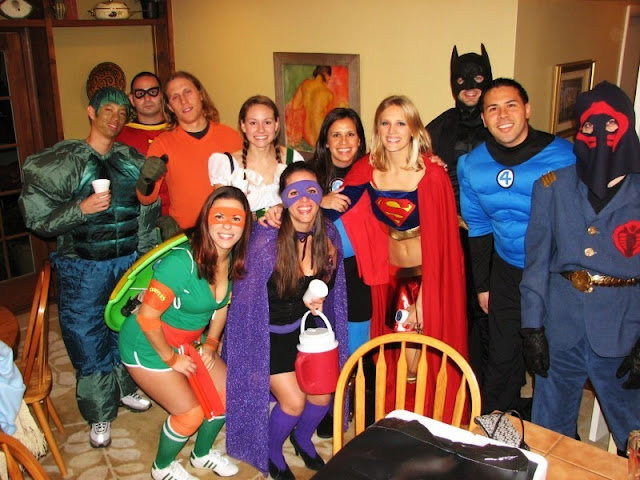 Last year I was pregnant and we did a small “kids” party.  We didn’t dress up ourselves, and it just wasn’t as much fun.  It was definitely great to see the kids partying and Christian loved it, but I really missed dressing up.  (And to me, a night is only a perfect “10” if it ends in dancing.)

We usually start out at our house with a small pre-party & then get a limo into the city where we meet up with all of the other ridiculous people.

SO…  this brings to me to where we’re at now.  We really debated and wishy-washed about doing something fun for Halloween this year.  It’s so sad but we sort of didn’t want to.  My best friends live far away and can’t make it…  It’s a lot of effort.  I barely got pumpkins outside this year.  It just feels like time is racing by and I’m seriously flying by the seat of my pants.  I read all of these beautiful blogs with creative ways to get your house ready for Halloween & table settings & on & on and I love them and plan on trying out the ideas myself but before I can get my act together, the event’s upon me.  As we were driving to High Point & throwing the idea of a party around -pretty much thinking ‘no’- we put on some music and before I knew it, my hands were in the air and I was dancing in my seat.  (Taio Cruz’s Dynamite is really one of the best songs EVER and I fully blame it for the evite I subsequently sent out.)

I have no costumes… only a theme…  Cheesy Teen Horror/ Comedy Movies.  Dave’s going as this guy: 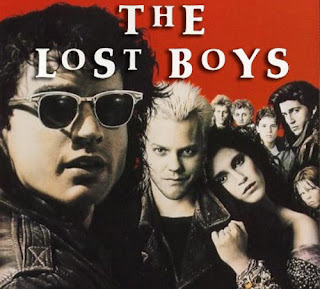 {Best movie ever}
… and we’re still loolking for a Keiffer.   And a nice curly brown mullet wig and some fangs…
I’m going as my childhood idol: 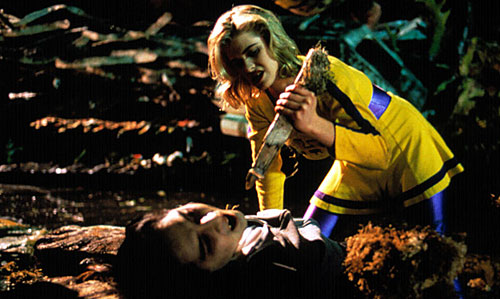 {hahahaha what does that say about me?}
Yeah, when I was 10 I taught myself the entire dance in the beginning of Buffy the Vampire Slayer and used to do cartwheels and sommersaults on the street while holding a stake.  (Issues much??)
So… we mustered it up for another year.  We were so close to not doing it but we just felt like that would be giving up and we’re not ready for that.  I know it’ll be fun, it’s just the process of getting there that has me a bit exhausted.  It’s also harder to convince friends and a few former troopers are done dressing it up now that they have kids which makes me so sad.
Costumes for the whole family are on the agenda for tonight and we’ll be breaking out the sewing machine.  I really am torn here.  It’s hard to get into Halloween when you have kids.  Maybe we’re not supposed to?? hahah  Is anyone else feeling this?  I envision getting crazier & crazier each year with a haunted house and over the top decor.. maybe murder mystery party…??  Is it too much.  What do you do?
And, if you want to get excited, go here and listen.  Anyone in the DC are going out Friday night?  We usually head out somewhere and are debating where.