First I just want to say THANK YOU to all of the amazing comments you left on the last post.  We’re definitely not alone and it’s nice to know that.  I nodded, laughed and even teared up at some of your comments from yesterday’s post.  Each & every piece of advice is awesome so if you didn’t get the chance to read the comments, check them out.

On a totally unrelated note, things have been progressing with the DC Design House.  In case you don’t know how it works (I didn’t until just a couple of months ago) I thought I might explain the process.  In December, just before Christmas, the house was open for two days so that designers could drop by, choose a room and measure & photograph it.  (Like I’ve mentioned before, the house is amazing.)  I was seriously nervous.  It’s an interesting feeling to be in a room with other designers, measuring the same space.  Everyone was really nice though & there were no reality-TV drama moments or anything like that. 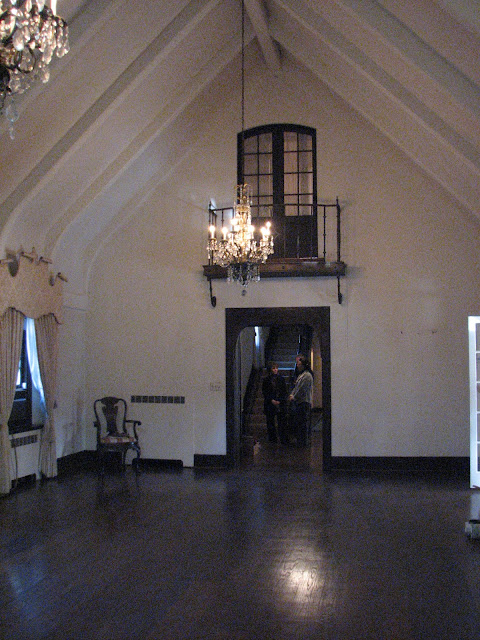 {See the balcony?!! Looooove this house… and this room.}

We had a couple of weeks to put together a design proposal & board for the room we’d chosen.  We scampered around making phone calls for donations and getting everything just right.  We had an artist do renderings of our proposed space and we submitted the board and portfolio to be reviewed by the Committee.  That was on January 7th.

We had to wait until January 31st to find out if we had been selected or not.  Twenty-four days doesn’t seem like a long time, but by the last 3 or 4 days I could barely stand it.  I got a phone call that I had been selected (eeeek) and then it was time to get to work.  I got a different room from the one I had submitted a design for (I am thrilled with my new room!! 🙂 so I had to change the design a bit.  (The room determines its design just as much as what someone wants to do with it.)

I got the chance to measure the new room and meet there with our contractors.  The new room needs something a little different than the what the first room needed, so I tweaked the palette and of course reworked the floorplan & furnishings to fit the new space.  Here’s a quick pic of the original board being torn to bits as we tried to salvage the pieces of it that we are reusing in our new room: 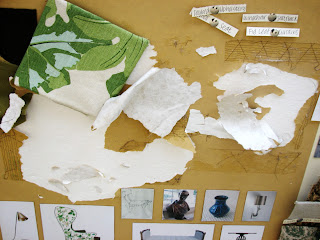 {Don’t get too attached to anything other than the Peter Dunham Fig Leaf fabric you see in the pic}
I created a new plan for the new room and we finished up the board today.  It’ll be shown on Bare Bones Day, which is when people can tour the house to see it “before.”  I’ll be there and if you live in the area & are free, you should come check it out!  (info here)  We’ve spent the past couple of weeks sourcing the pieces that will go into the room, finalizing plans, and securing donations from generous companies & contractors.  It’s been crazy because it’s not a normal house you can just go to whenever you need something.  There are specific times you can go & meet with contractors and everyone needs to be on the same schedule. 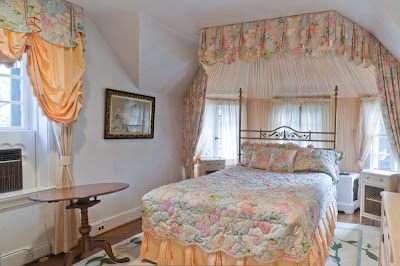 {design house room before}
The Bare Bones Tour is next Saturday and work begins the following Monday.  Our rooms need to be finished by March 31st.  Press Day is April 1st and the Design House opens on Saturday, April 8th!!
I’ll keep you posted as our room progresses.  First up is removing the current wallpaper!