Hello!! It’s been a good long while since I’ve written, so happy 2019!!  Things have been feeling busy & fun around here and we’re working on
some exciting new ventures that I cannot wait to share with you!!

In the meantime, we’ve finally gotten the air dates for the full season of Best House on the Block on HGTV- woohoo!! It’s early so get ready to DVR with me!!  It will be airing Friday mornings at 8:00 & 8:30 Eastern beginning next week on
Friday, February 15th through Friday March 8th.  (There will be two episodes each morning.)  The few episodes shown originally on DIY &
HGTV will be re-airing along with all of the never-before seen episodes.  We’re so excited for it to finally be out there!!

…And, it’s been a long time coming, but I wanted to share the before & after post on Episode 1- Split Personality Cape Cod.  Throughout
this whole process, one of the things David & I were so thankful for was being able to work with such kind & genuinely good people, and our
episode 1 clients,  Alison & Shawn Friesen & their two daughters,  were no exception.  If you missed this first episode, you
can check it out on week 2 (Feb 22nd.) and see for yourself how adorable they are.  We absolutely loved working with them!!  Mike Carr, owner
of CarrMichael Construction, worked tirelessly with his team to make these renovations
happen on the craziest timelines & we couldn’t be more thankful for all of their beautiful hard work!! (4 weeks!!)

This is what the house looked like when we saw it for the first time: 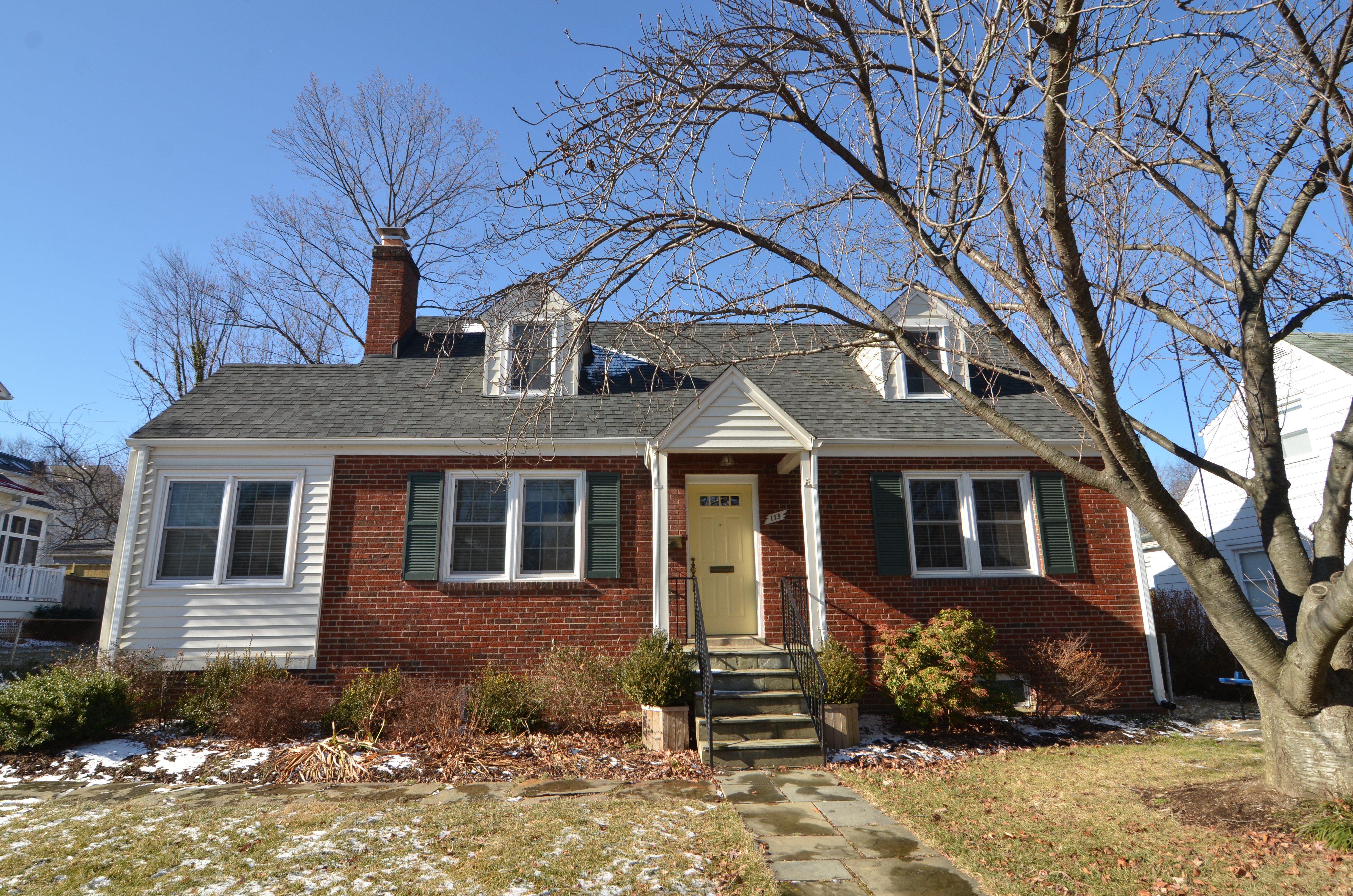 It’s a cute brick cape cod but we knew it had the potential to feel like a charming little cottage, which was Alison’s dream.  Things were so crazy
on reveal day and we were down to the wire so I totally forgot to take an “after” but I did get this “almost after” shot with Dave in it sweeping off
the walkway:

We had the brick painted white, and shingled the little addition on the left with cedar shingles and added cedar shutters and window boxes for charm.

{Another angle from before we got the flowers in!}

Here’s a photo of the original entryway which was part of the living room: 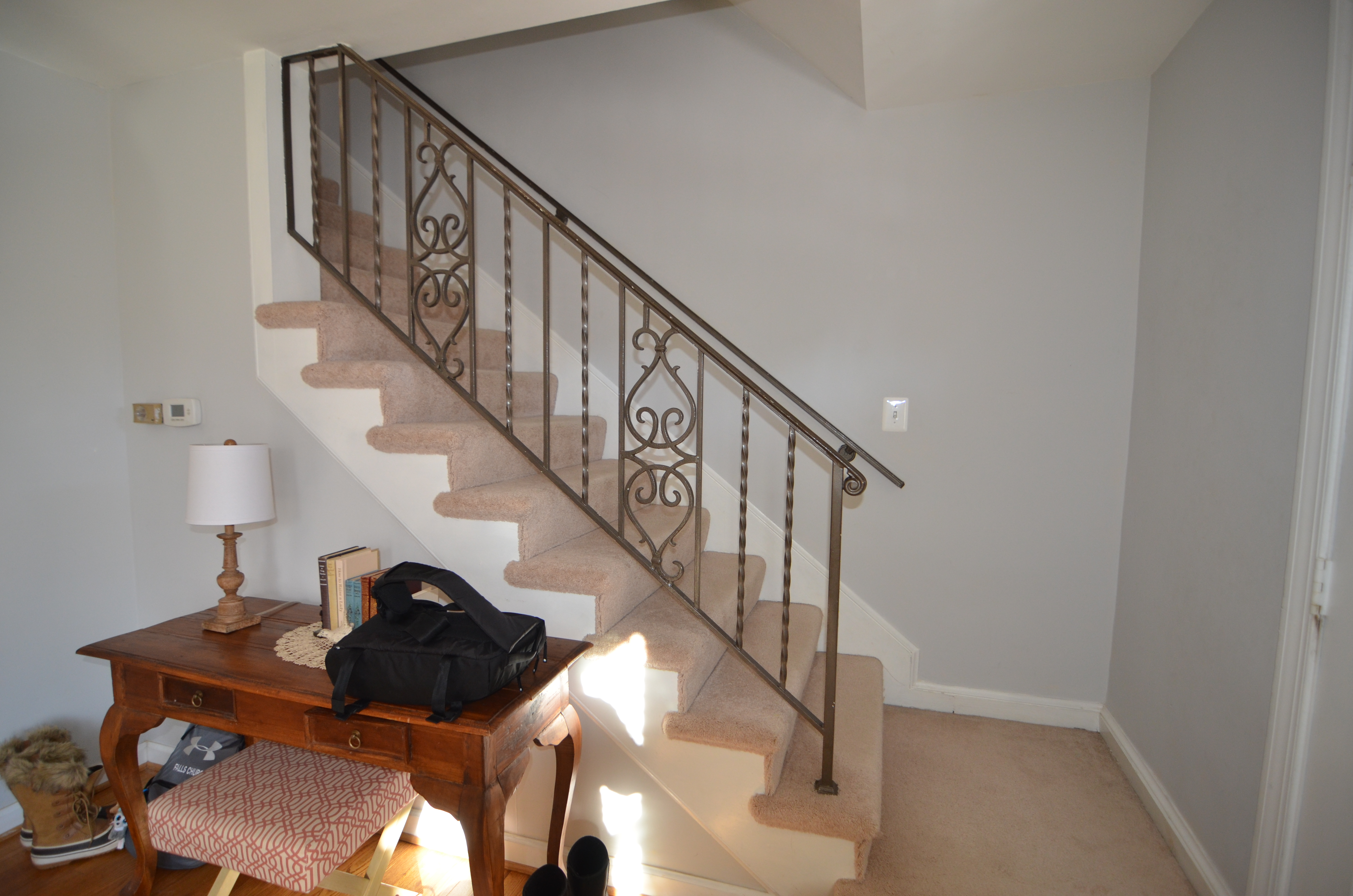 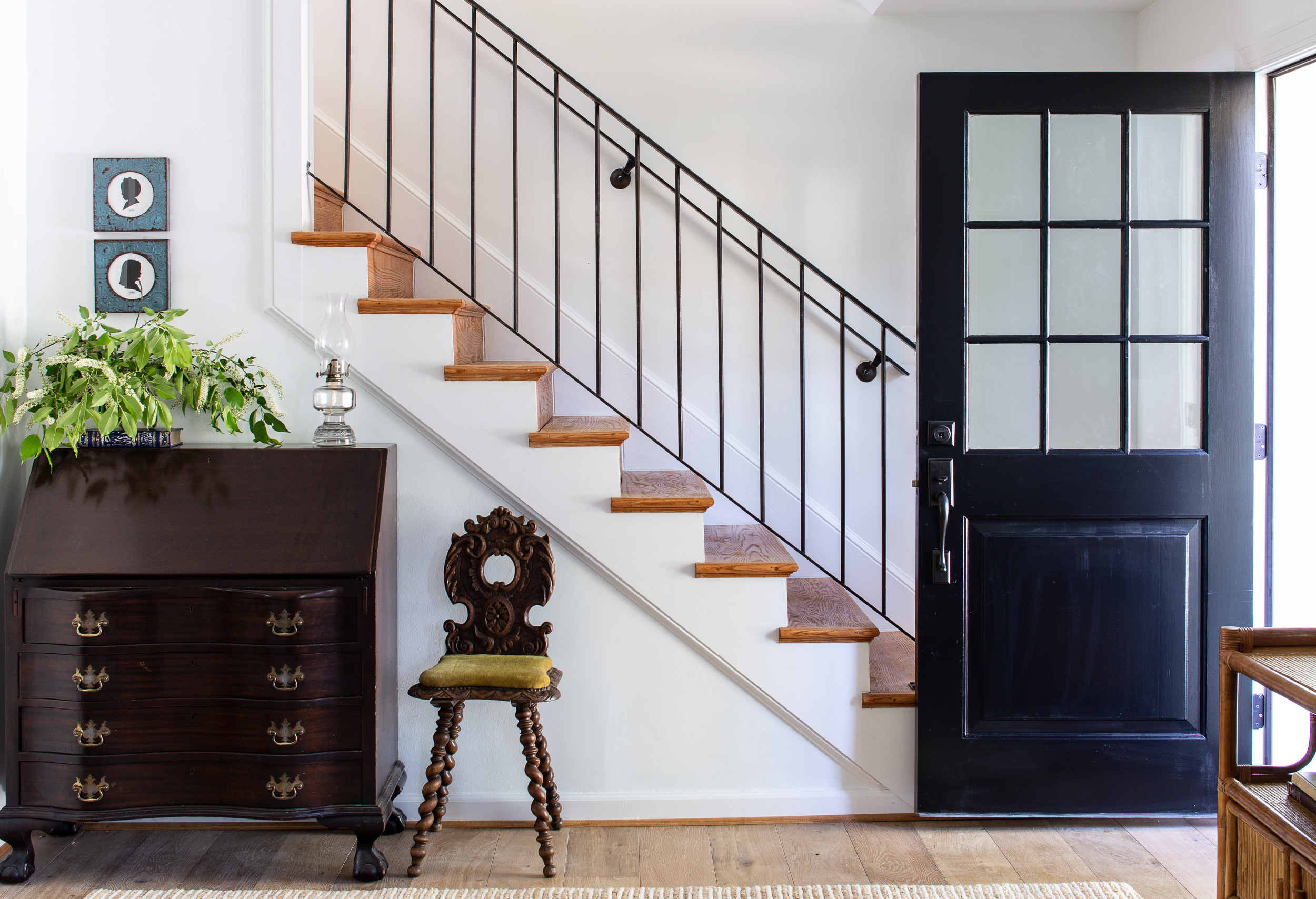 We removed the carpeting and replaced the curly swirly railing with a simple iron one by one of my favorite people, Tom Owen, whose iron shop we visited
in Herndon during the episode.  Tom has been doing my railings for years.  We used as much as we could of the Friesens’ existing furnishings
and moved this vintage secretary from their little office into the foyer which fit perfectly.

Here’s a look at the original living room which the front door opened into, making it feel more like a throughway than a living room for the family.
We added a wall with a large cased opening just before the windows to create a separate foyer and living room. 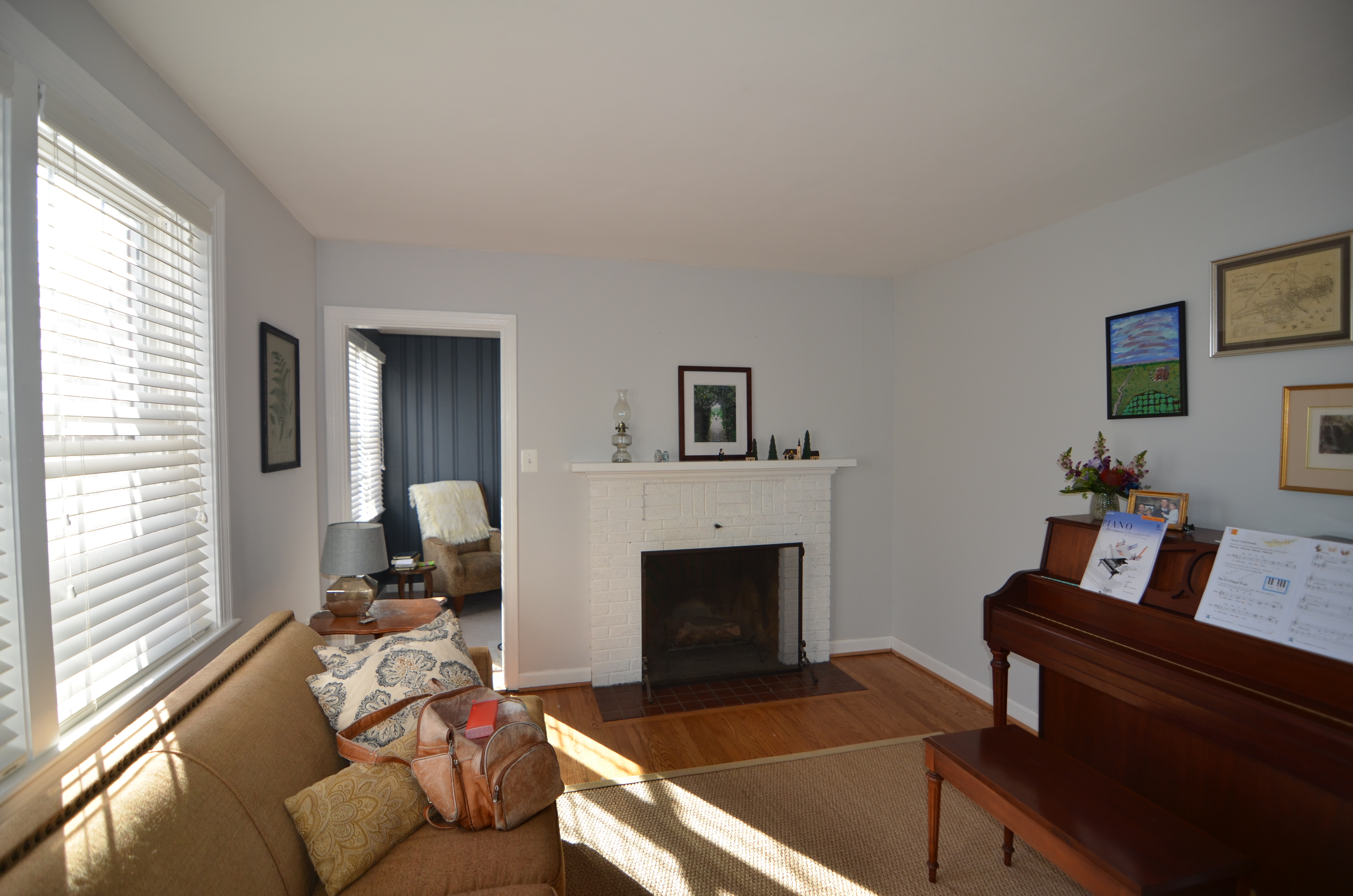 And here’s the living room “after”: 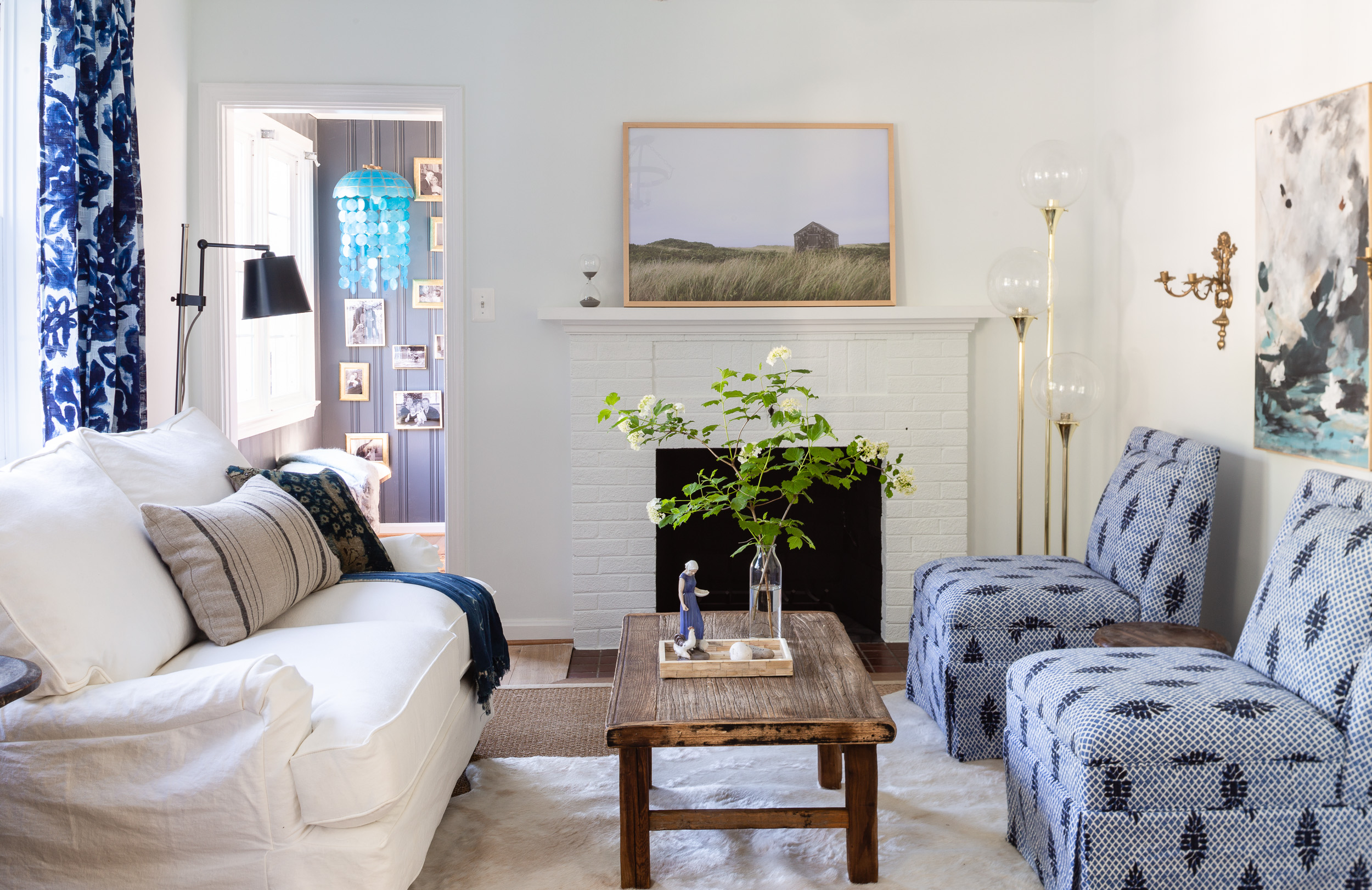 It’s still open but feels so much more private now- no longer a hallway!!  Fresh paint, a new slipcovered sofa and slipper chairs (found on
One Kings Lane).  The photo above the mantle, “Grey Lady” was given to the Friesen family by the super-talented Lauren Marttila and is
available here . Alison is from the Northeast
and it couldn’t have been more perfect for her!!  A simple glass bottle with branches from my yard makes an easy centerpiece and adds
height to the center of the room. I generally prefer casual, wild-feeling greenery and branches for a laid-back,  relaxed vibe.

Below is another view which shows the piano and the lack of seating in the living room. The Friesens’ daughter loves to play but wanted to be able
to practice with a bit more privacy so we moved the piano into the little office addition that’s just past the living room, which also allowed
for more seating. 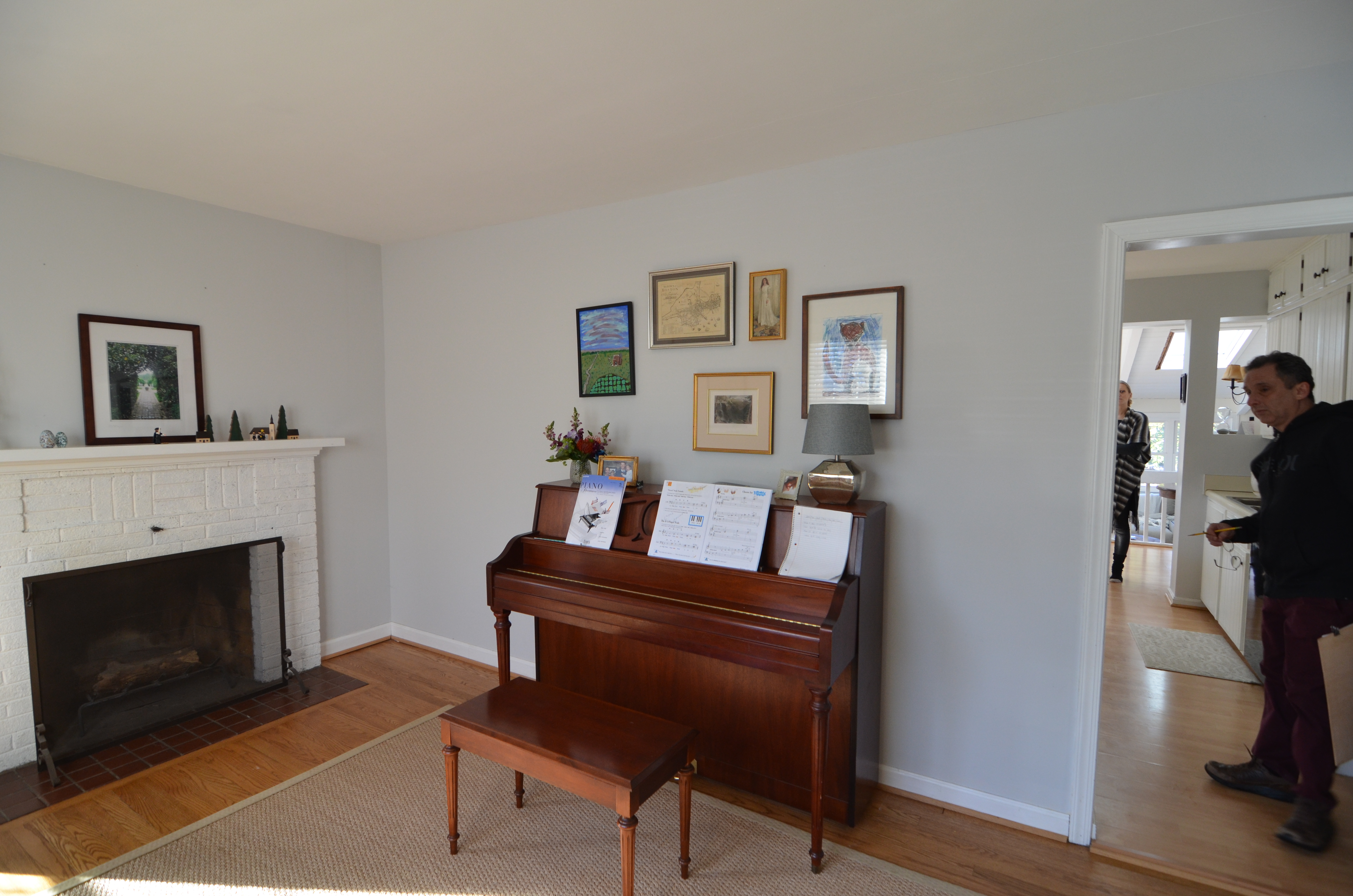 And here’s that wall now: 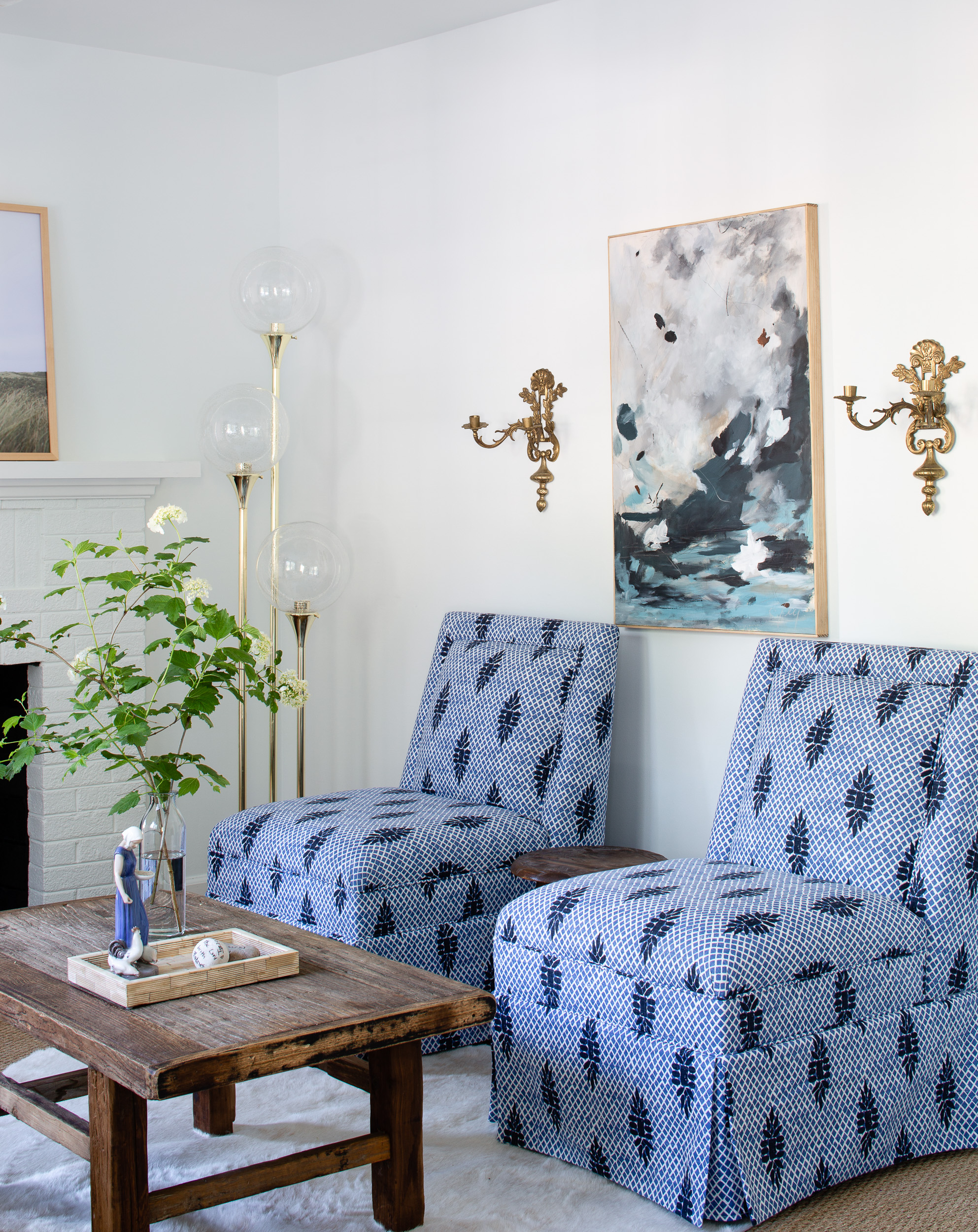 The amazing painting was given to our clients by super- talented artist Chelsea Fly – whose website is here .  I had so much fun arranging their keepsakes around the house, including the pieces on the coffee table.

Here’s a shot of the old office, which the Friesens said they rarely used: 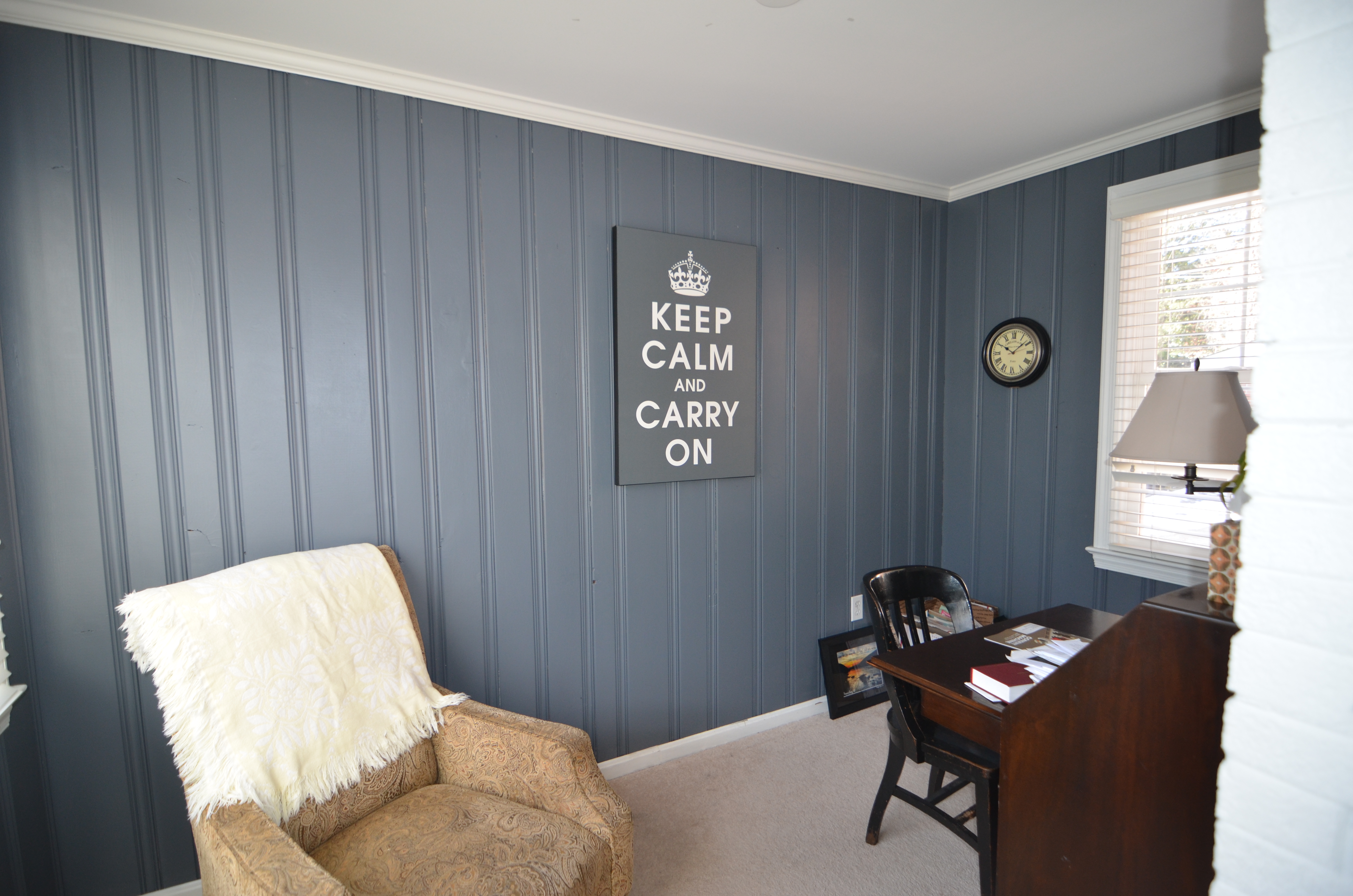 All they knew was that we were moving the piano in there but we decided to surprise them with a fully-decorated music room for the girls.
We got a hold of a bunch of the Friesens’ beautiful family photos, printed them out, framed them, and hung them all over the walls in the
girls’ new music room. Without a doubt, my favorite part of this episode was when Ali saw it for the first time. I still get teary when
I think about it.  We wanted the music room to be a fun, creative little place for the girls but I underestimated how much it would
truly mean to them to see all of their family photos finally hanging in the house.  It’s another space I didn’t get a real “after”
of but here’s my iphone pic of it taken during install: 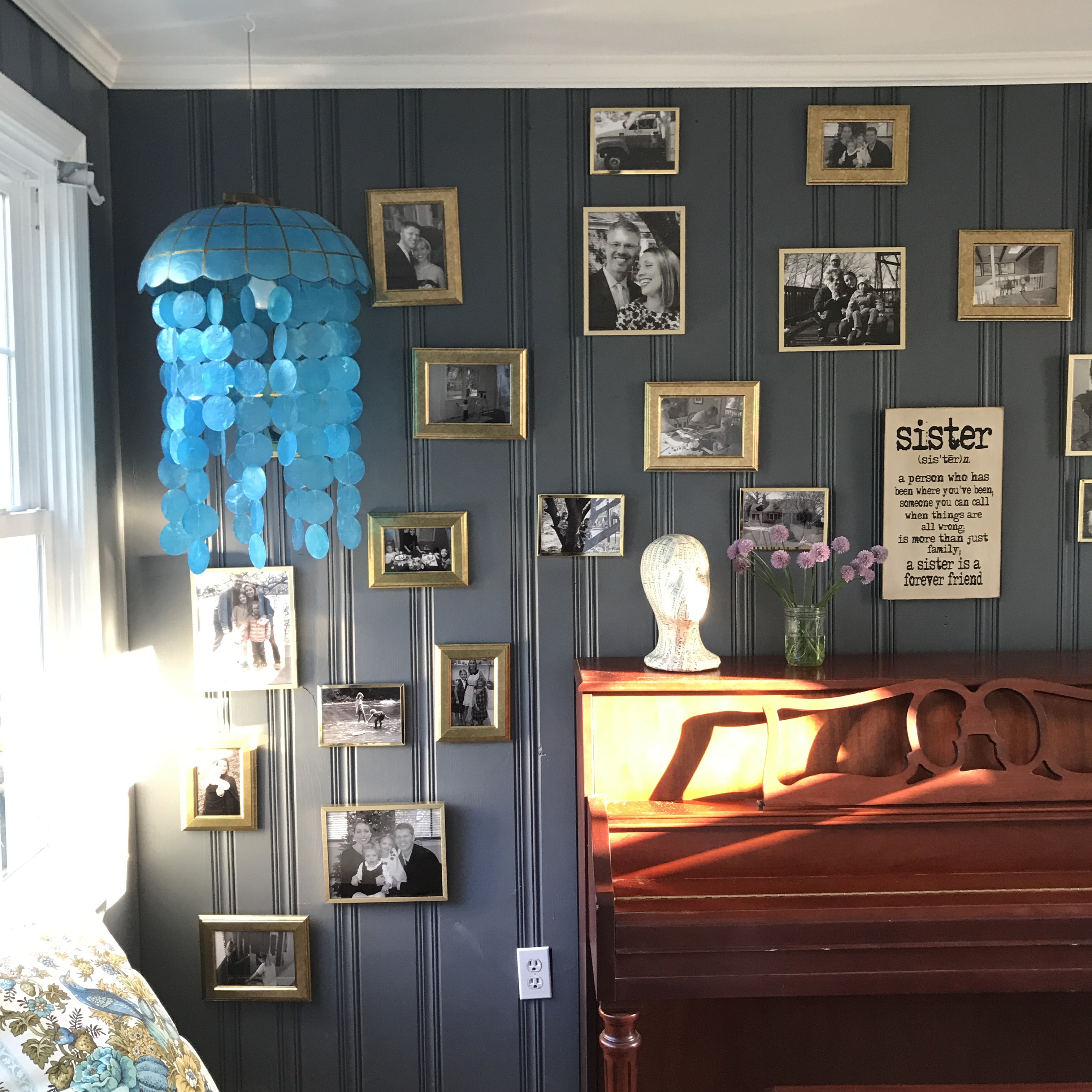 I found a funky little blue capiz shell light for the corner I thought the girls would love and added a few fun vintage touches.

Moving to the center of the house, here’s the kitchen “before”: 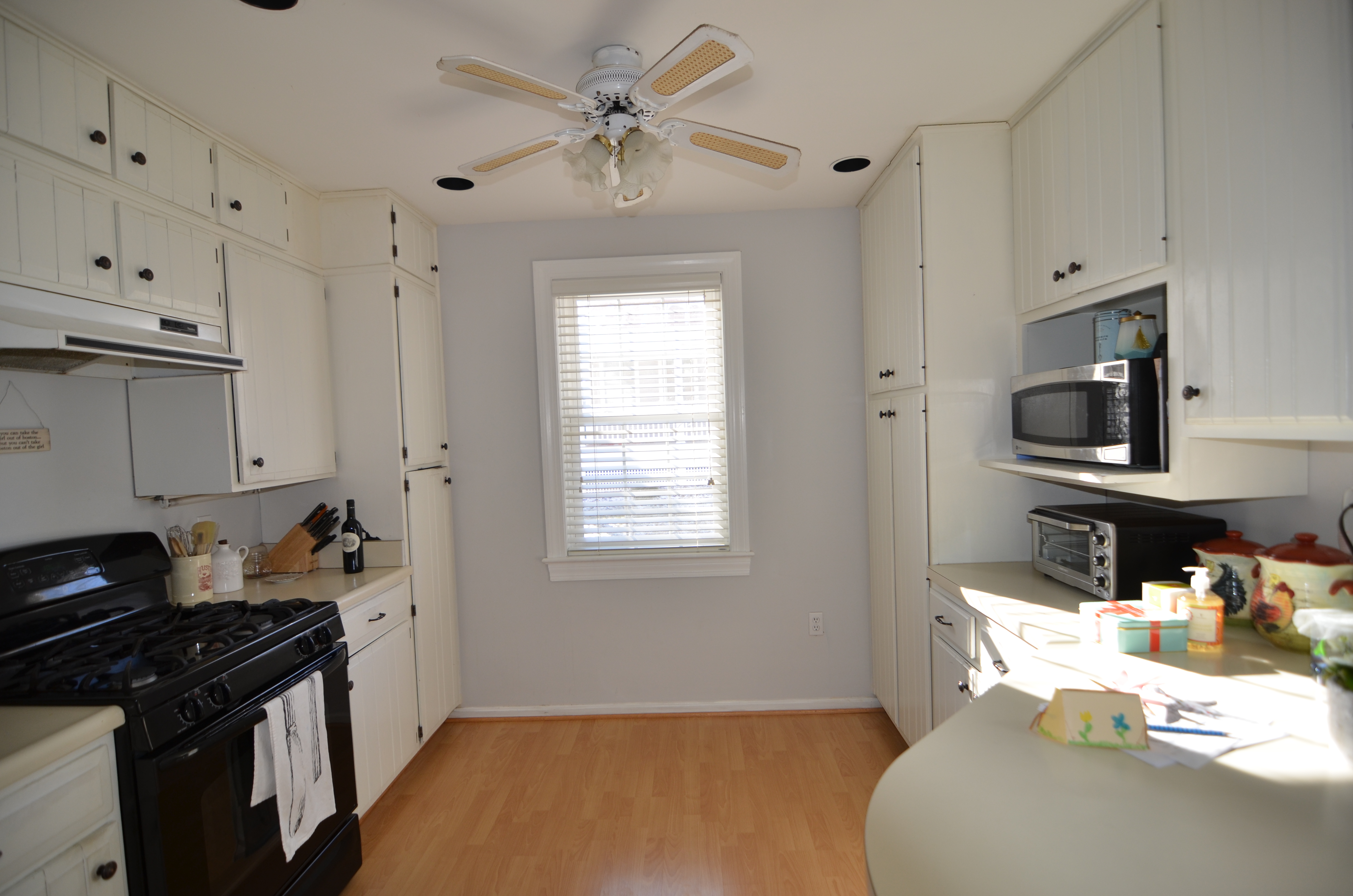 I really loved the quality of the light in the room and knew it could be arranged so much more functionally. 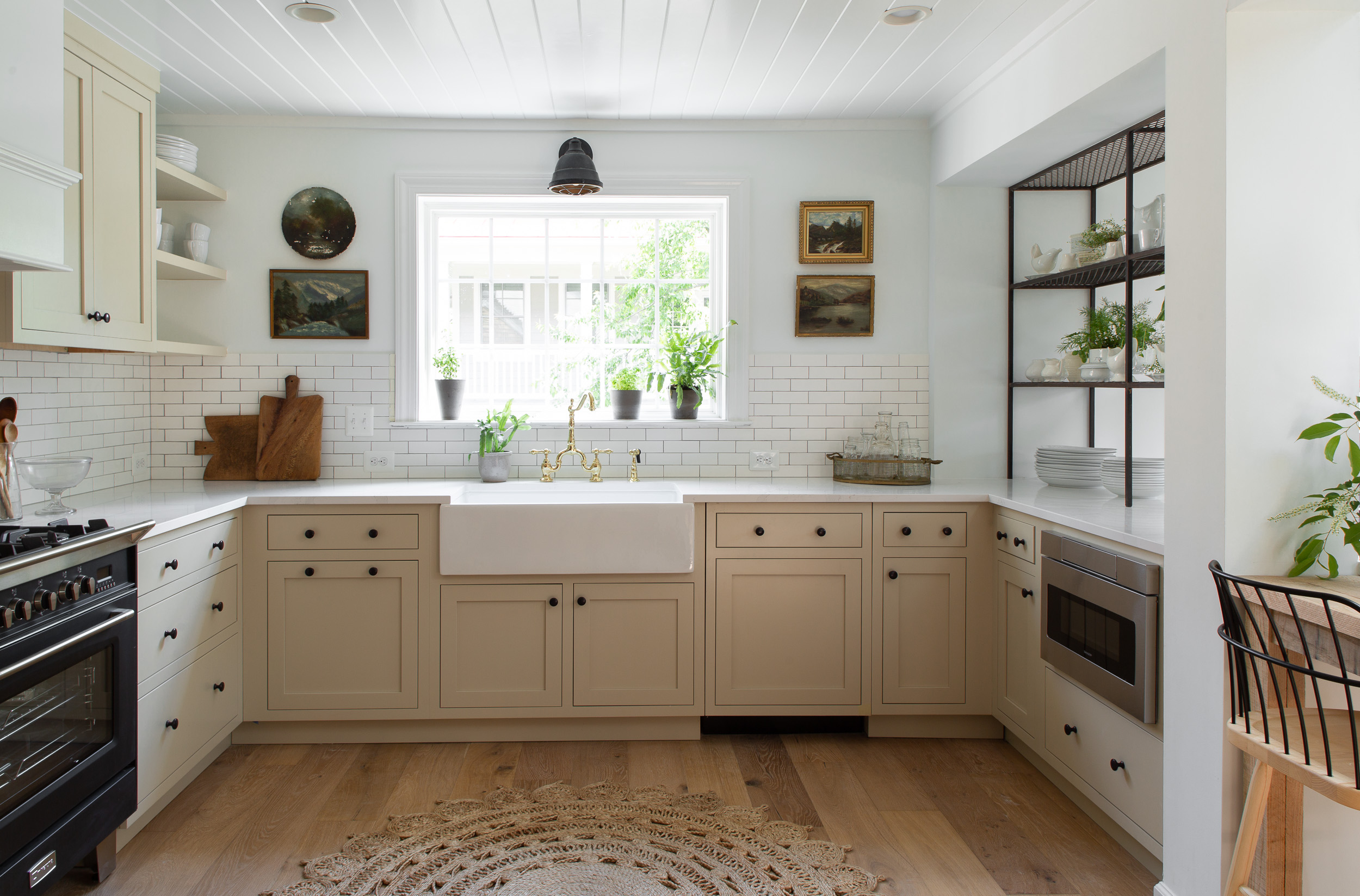 We enlarged the door into the kitchen from the foyer to better connect the front of the house with the back, got rid of the angles, removed
the wall separating the kitchen from the family room, replaced the existing window with a larger one and rearranged basically everything.
I went with putty-colored cabinetry and lots of white which felt soft and relaxed.  New wide plank white oak floors warm up the space.
I love love LOVE antique oil paintings and flanked the window with a small collection to add patina and color.

Here’s another angle “before”: 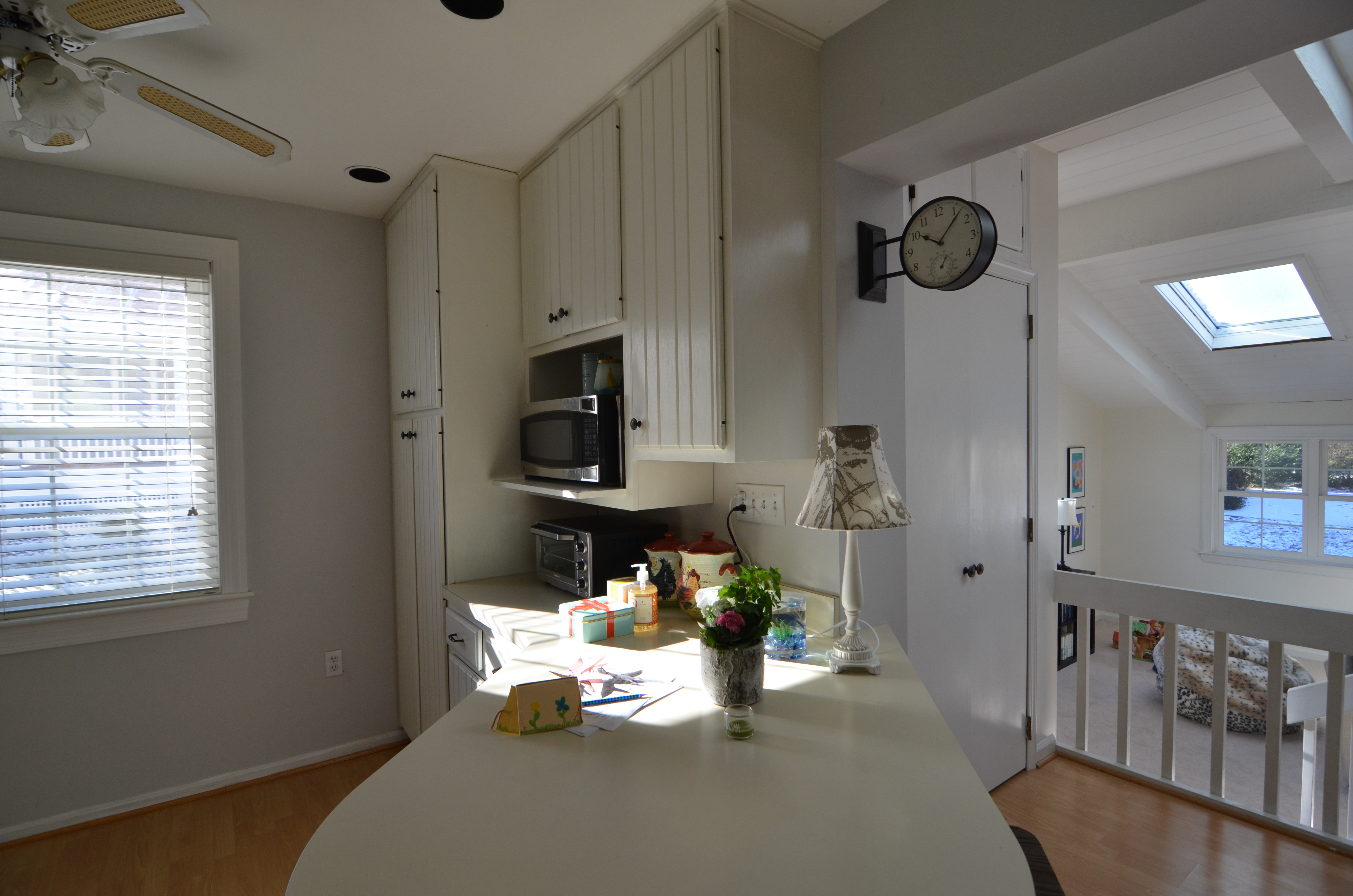 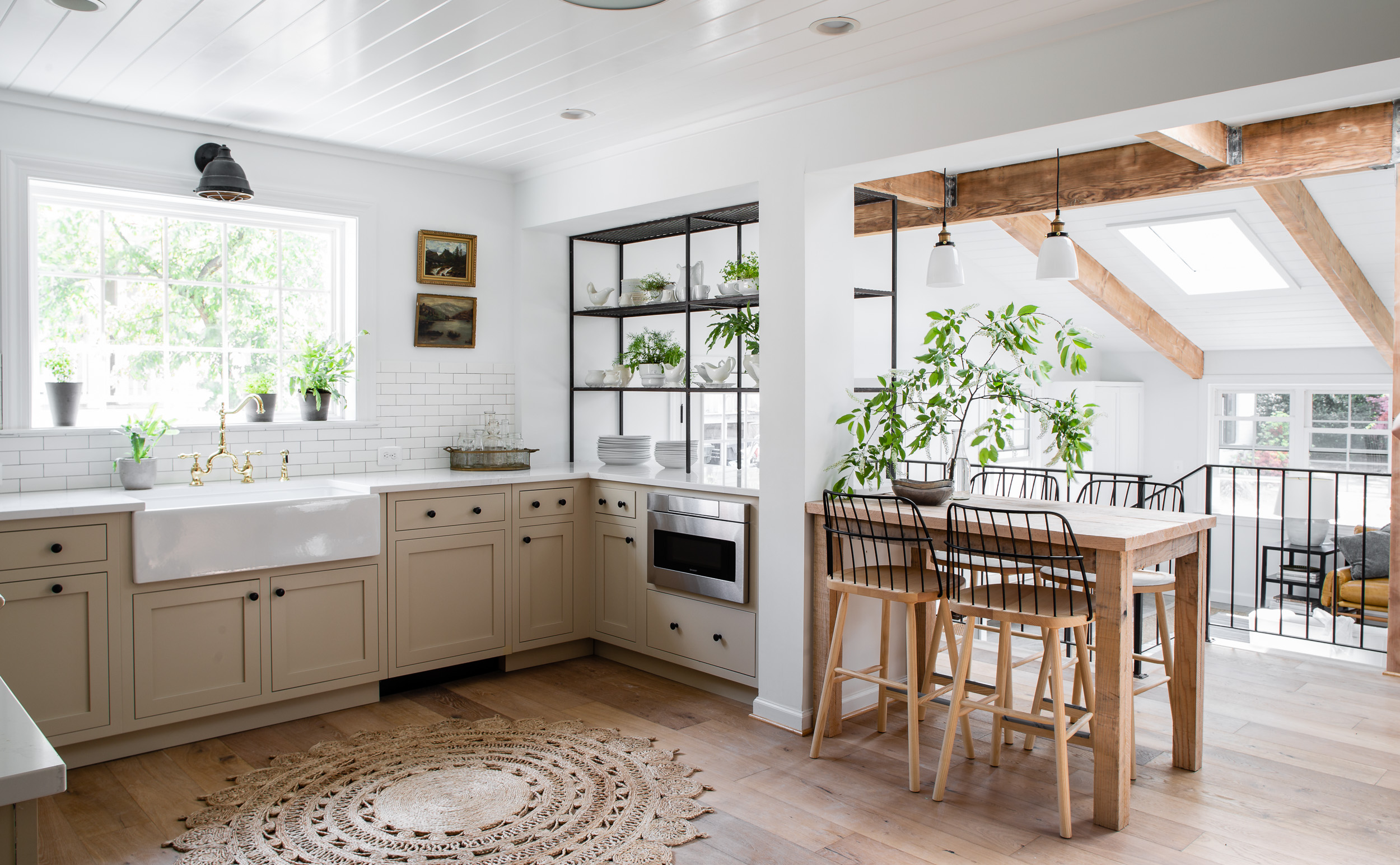 To maintain storage while opening up with kitchen to the family room, I had a custom iron baker’s rack by Tom Owen of Owen Iron Works mounted on the countertop. Mike made the white oak counter height table and now the family has a little
spot for casual meals and hanging in the kitchen.  We added v-groove paneling to the kitchen ceiling to connect it with the ceiling
in the addition which was already paneled.

Here’s a shot of the wall the sink use to live on: 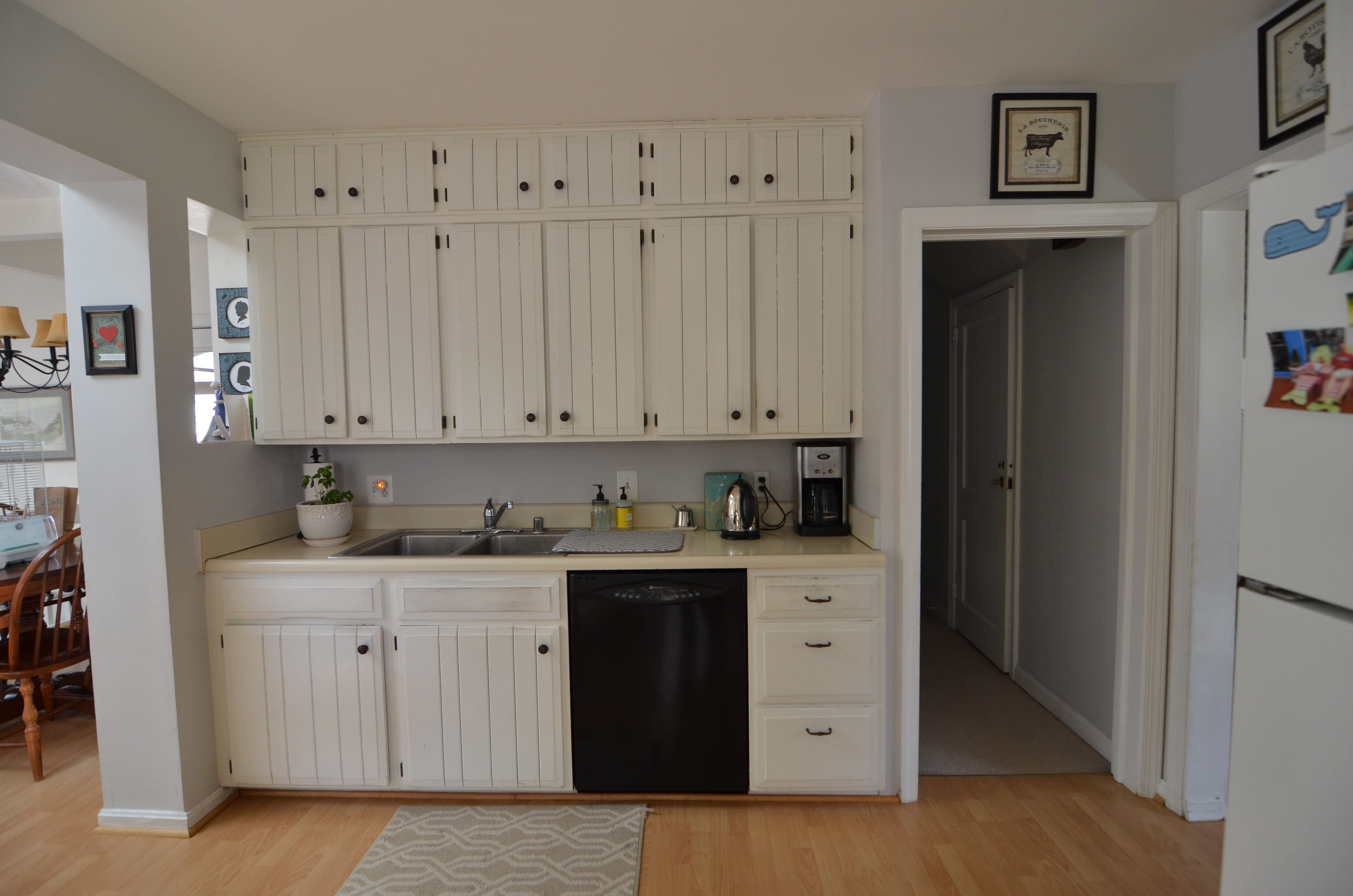 The Friesens would literally bang their heads on the cabinetry in above the sink and you had to kind of limbo to use it.  Moving the sink
across the room to the window changed everything. Here’s that wall now, with the refrigerator moved over: 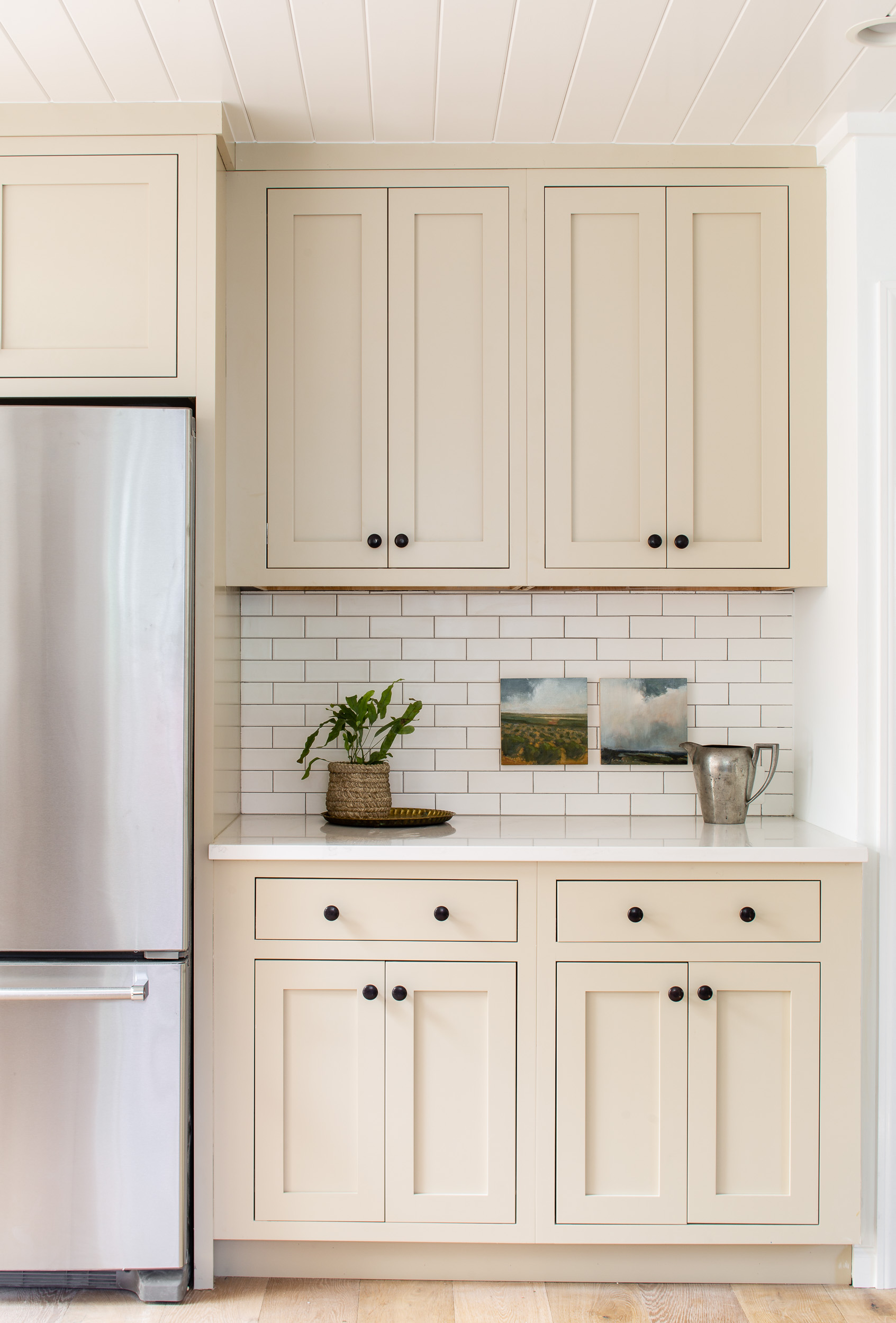 Here’s the view of the kitchen from the family room below originally: 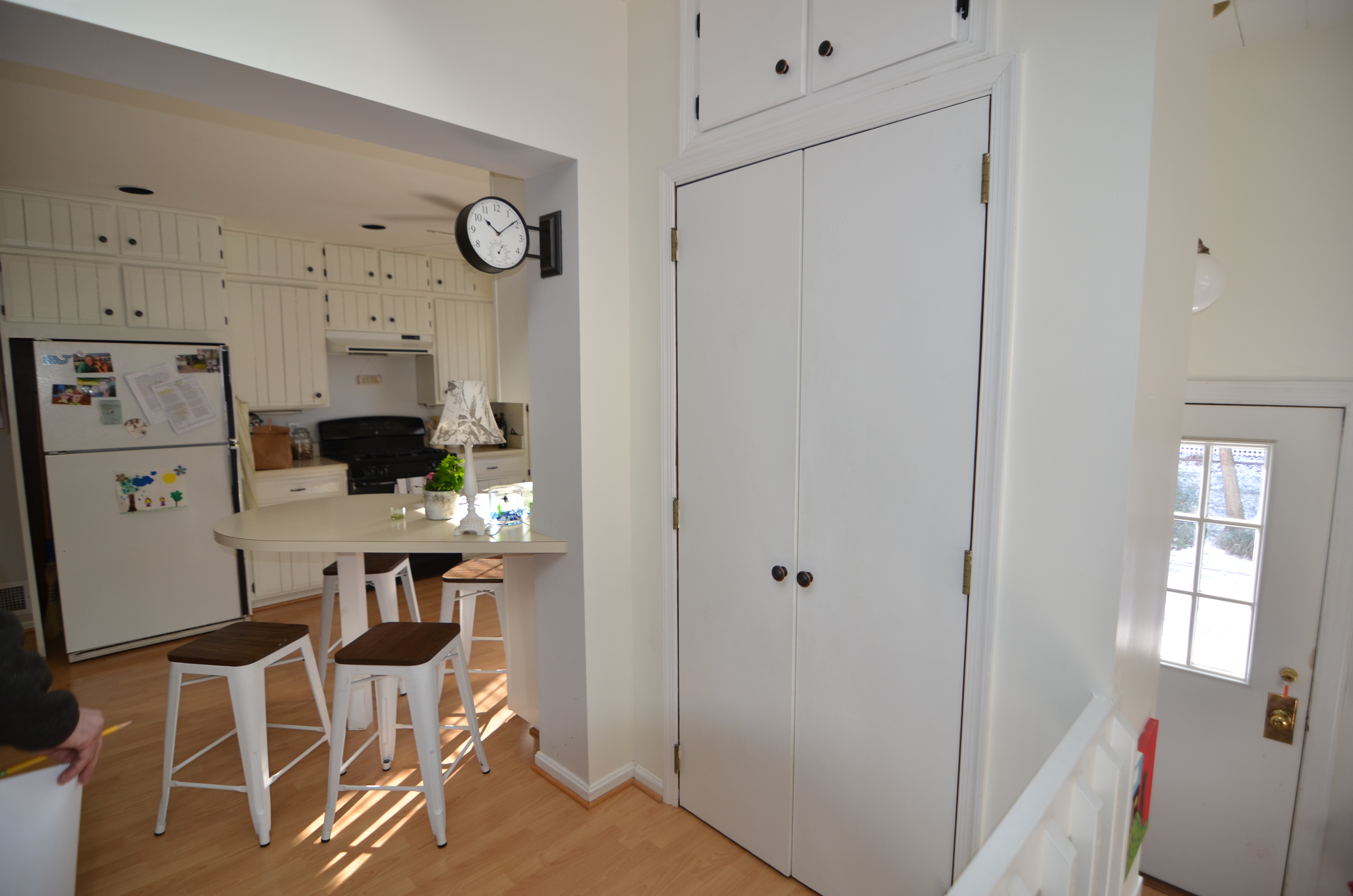 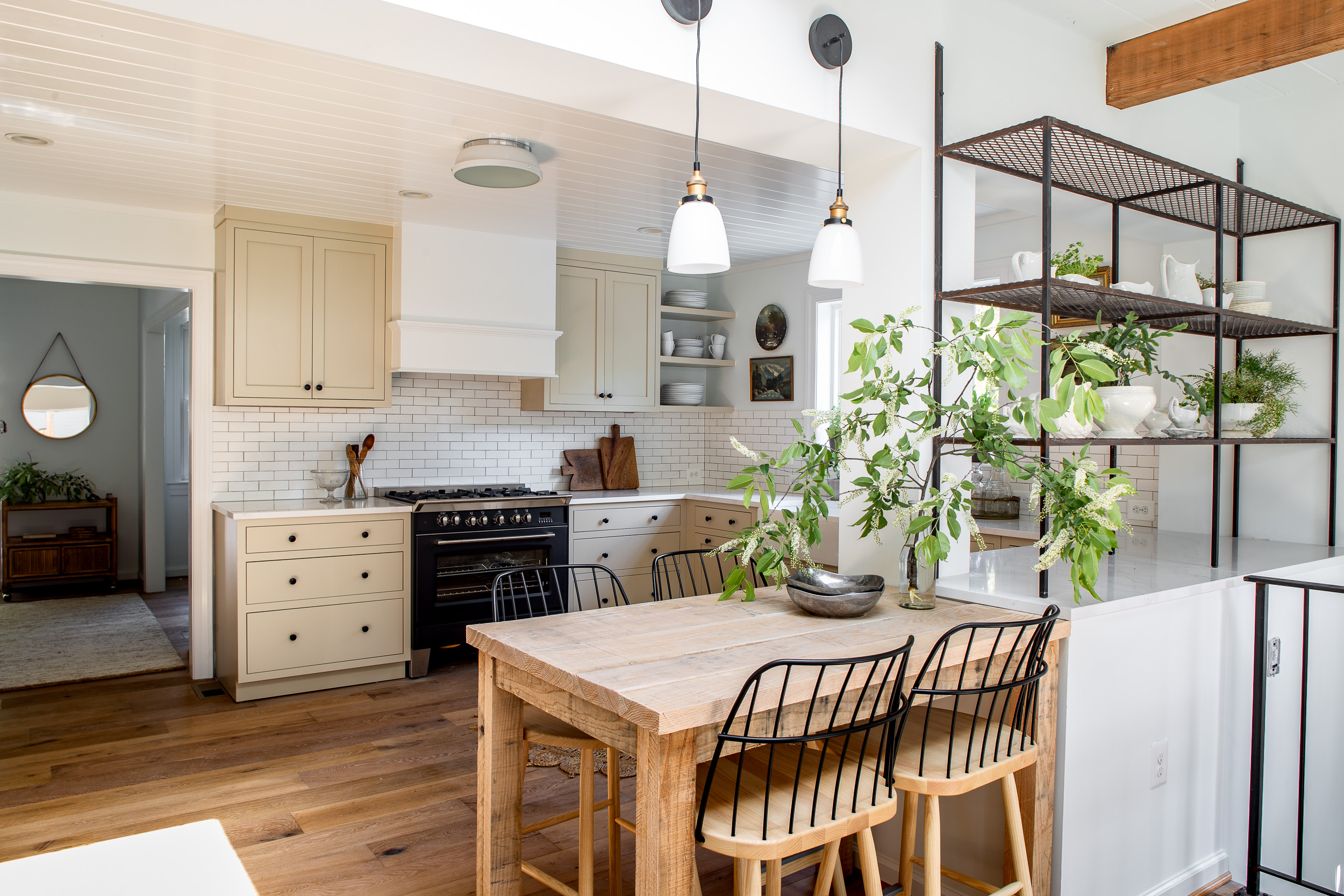 You really get a feel for how much it’s changed in this view.  It’s so much more open.  The mix of materials is done in one of my
favorite palettes- black, white and wood.  The range/ range hood and kitchen sink are focal points in an of themselves so whenever
I can, I try to center them onto their own walls.  It allows them functional breathing room and they each create a pleasing view to
look at.

Here’s a close-up iphone pic I got during install:

I often bring in black accents to keep things from feeling too “sweet” so you’ll notice a bit of black running through in the lighting, the
hardware, the barstools, the range etc.

Here’s a shot through the baker’s rack to the family room behind it: 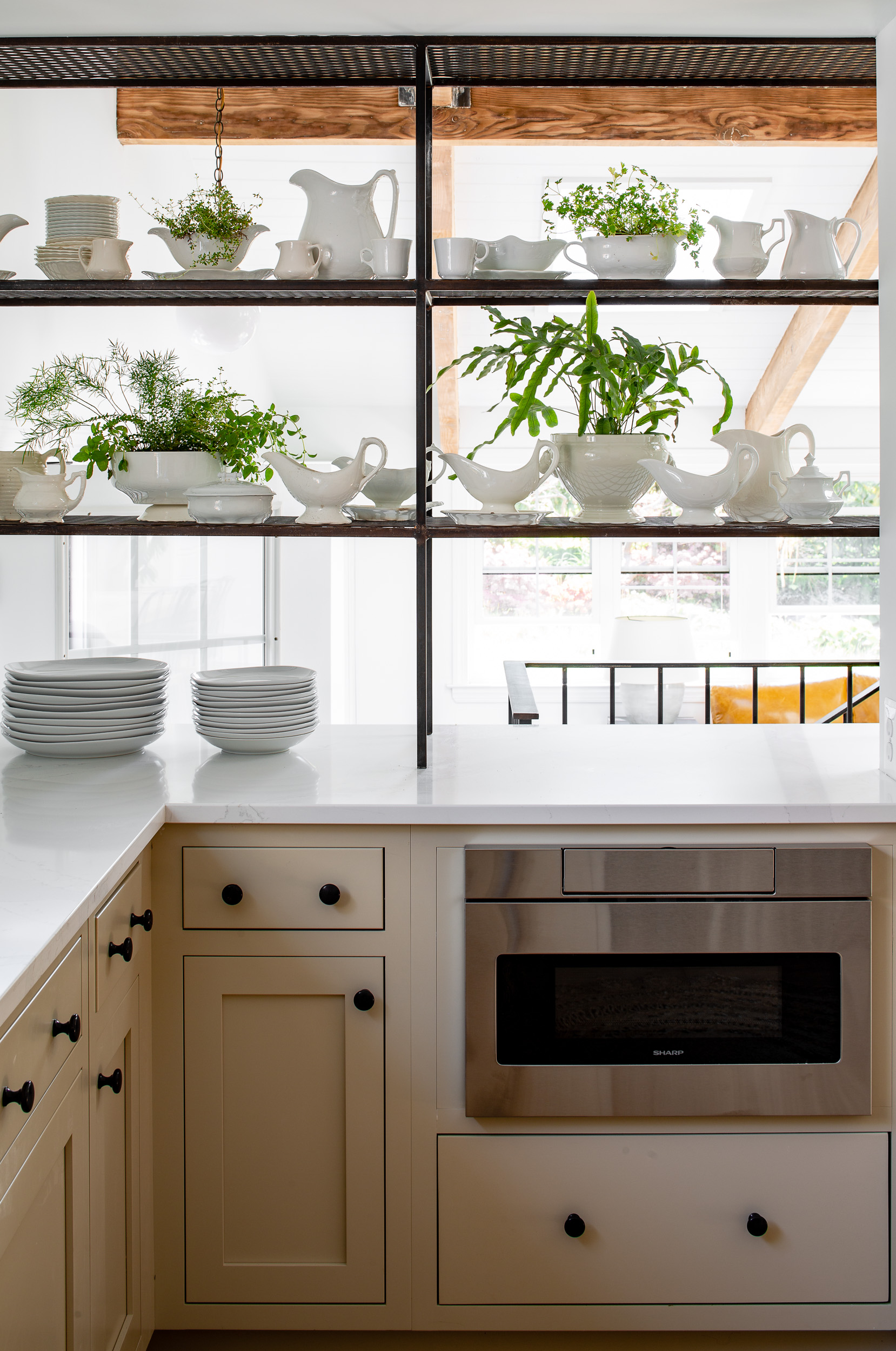 The countertops area marble-look silestone and we installed an undercounter microwave, which is something I almost always do in kitchens.

The dining area (below) was one of the Friesens’ biggest issues.  There wasn’t much space on either side of the table, so they had trouble
getting by and were constantly hitting the chairs against the railing and wall when they went to sit down.  The door to their screened
porch also knocked into the table when it was open.

We added a bench against the wall, swagged the light fixture (there was something in the ceiling preventing us moving the box) and got them
a long narrow zinc table.  We shifted the exterior door as close as we could left towards the railing and flipped the door swing so
it swung outwards into the screen porch instead of into the dining area: 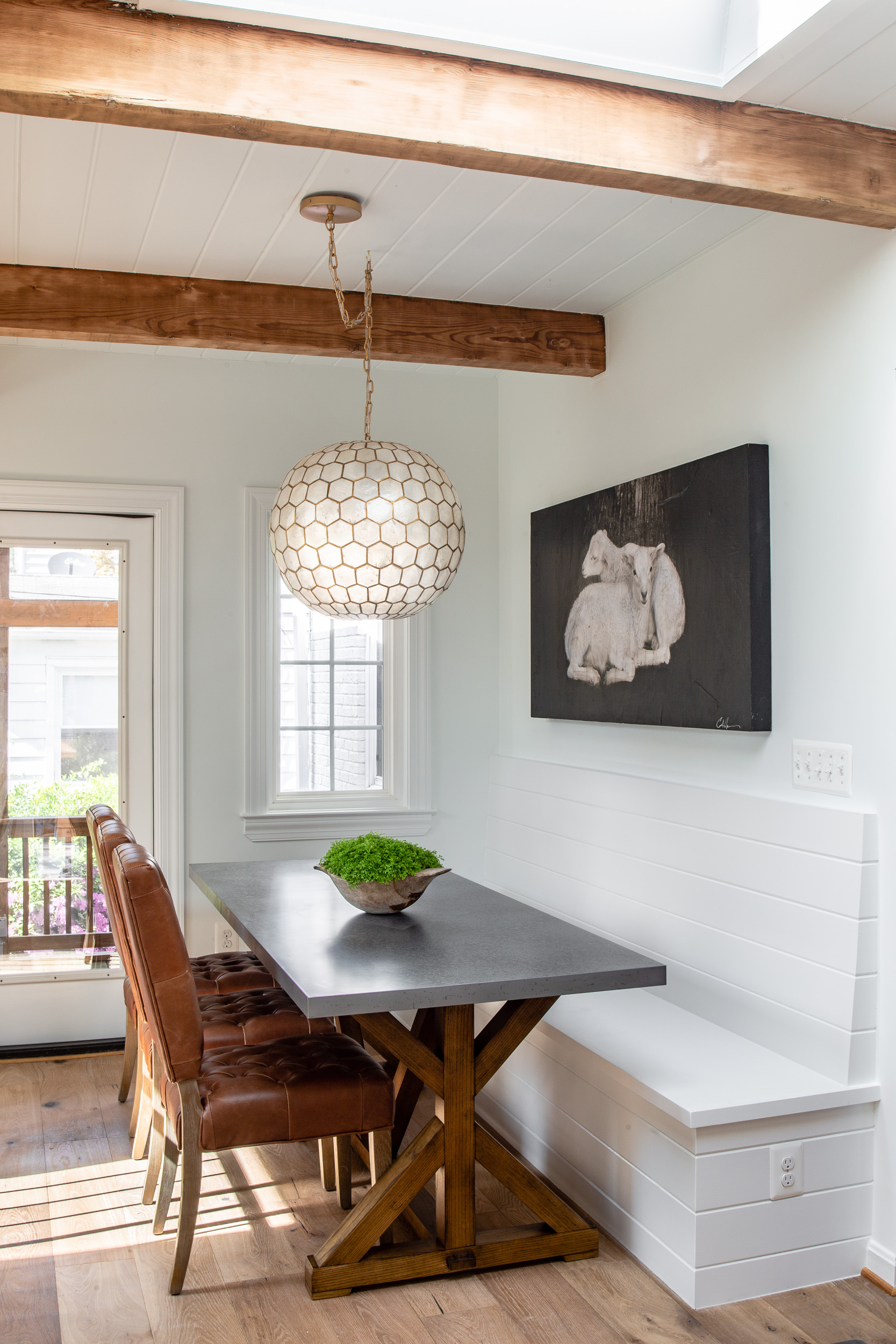 The lamb painting by Courtney J Garret truly makes
the space, adding soul, depth and juxtaposition to all of the fresh white. The brown leather chairs also add warmth and are super
comfortable for nice long meals.

Here’s a shot of the family room “before.” It felt cold both physically and visually- it was all white and gray, and had been built directly
on a slab and was freezing. (Which by the way provided bottomless low-hanging fruit joke fodder about the “freezing” Friesens.} 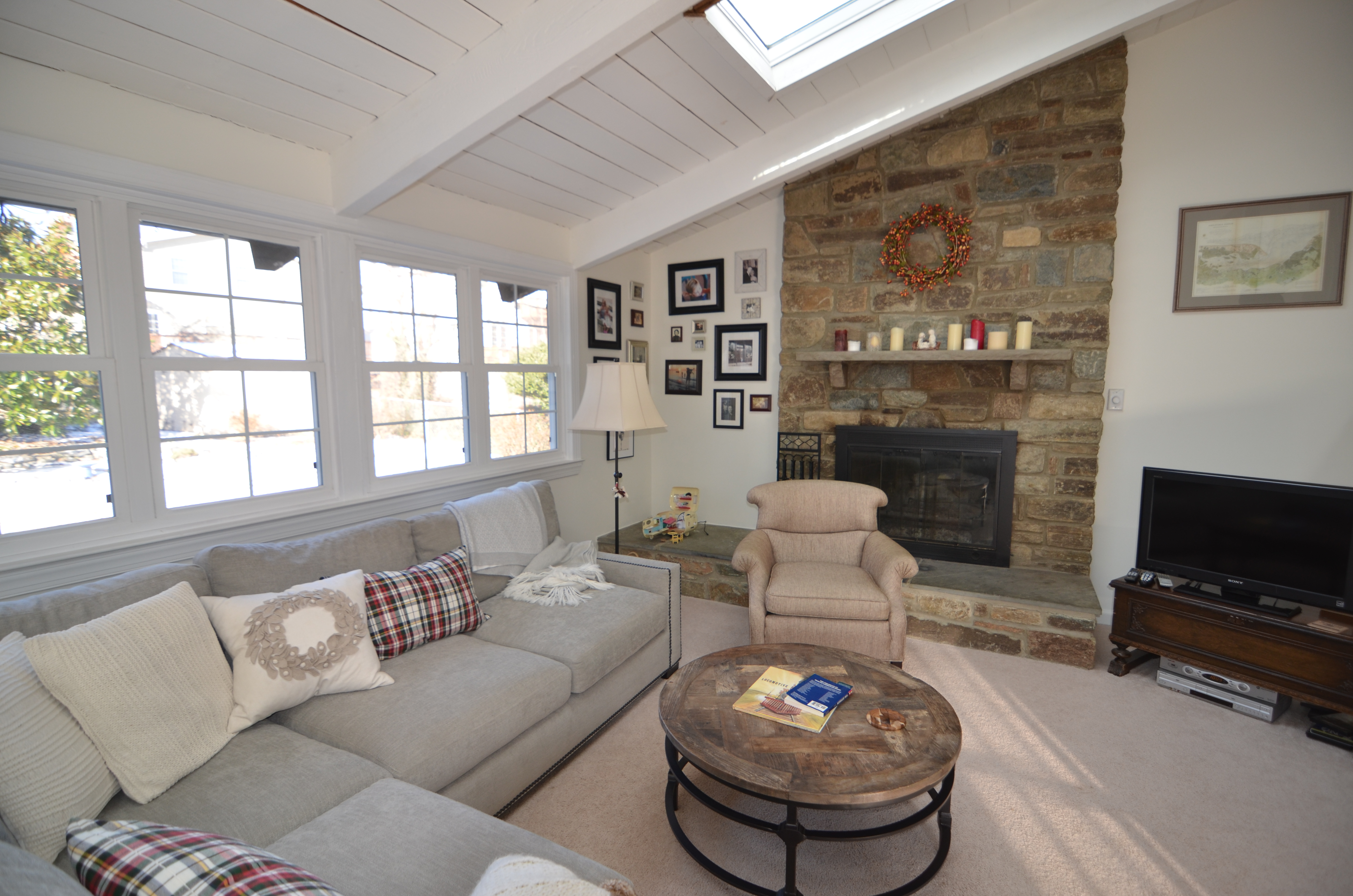 …And here’s how it looked when we were finished: 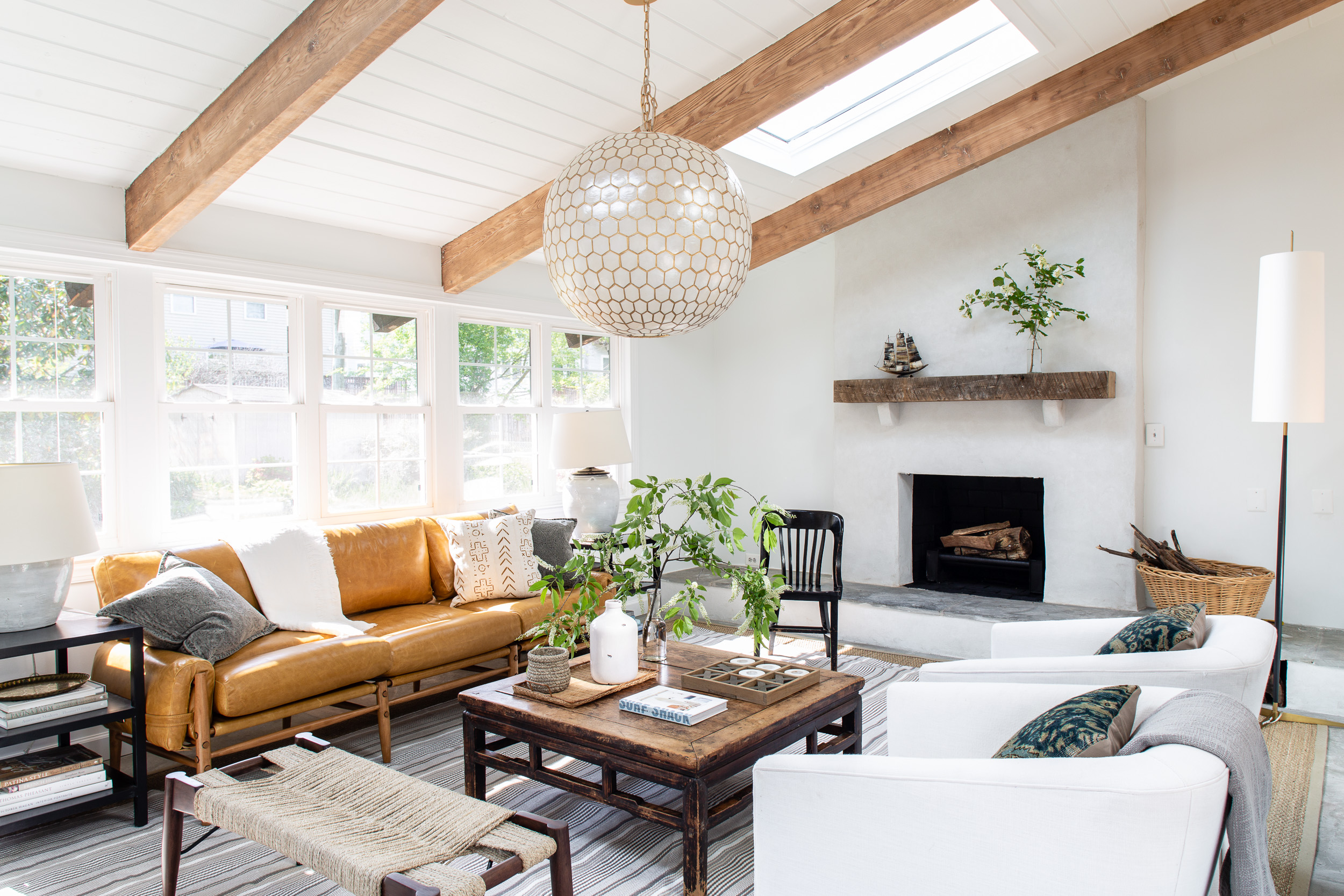 I had the beams sanded down (I’m still thankful to the CarrMichael Construction team for that painstaking work!!) to add warmth and texture.
We added flagstone floors with a heating element underneath for warmth and I had the fireplace stucco’d for a light and airy feel and
so the room wouldn’t be too “stone-heavy.” {The sofa isn’t mine for those who are wondering- I’ve had lots of people ask- mine was
discontinued when I bought it on sale- sadly!!- but this one is also from Anthropologie.}

Here’s the straight-on view of the fireplace: 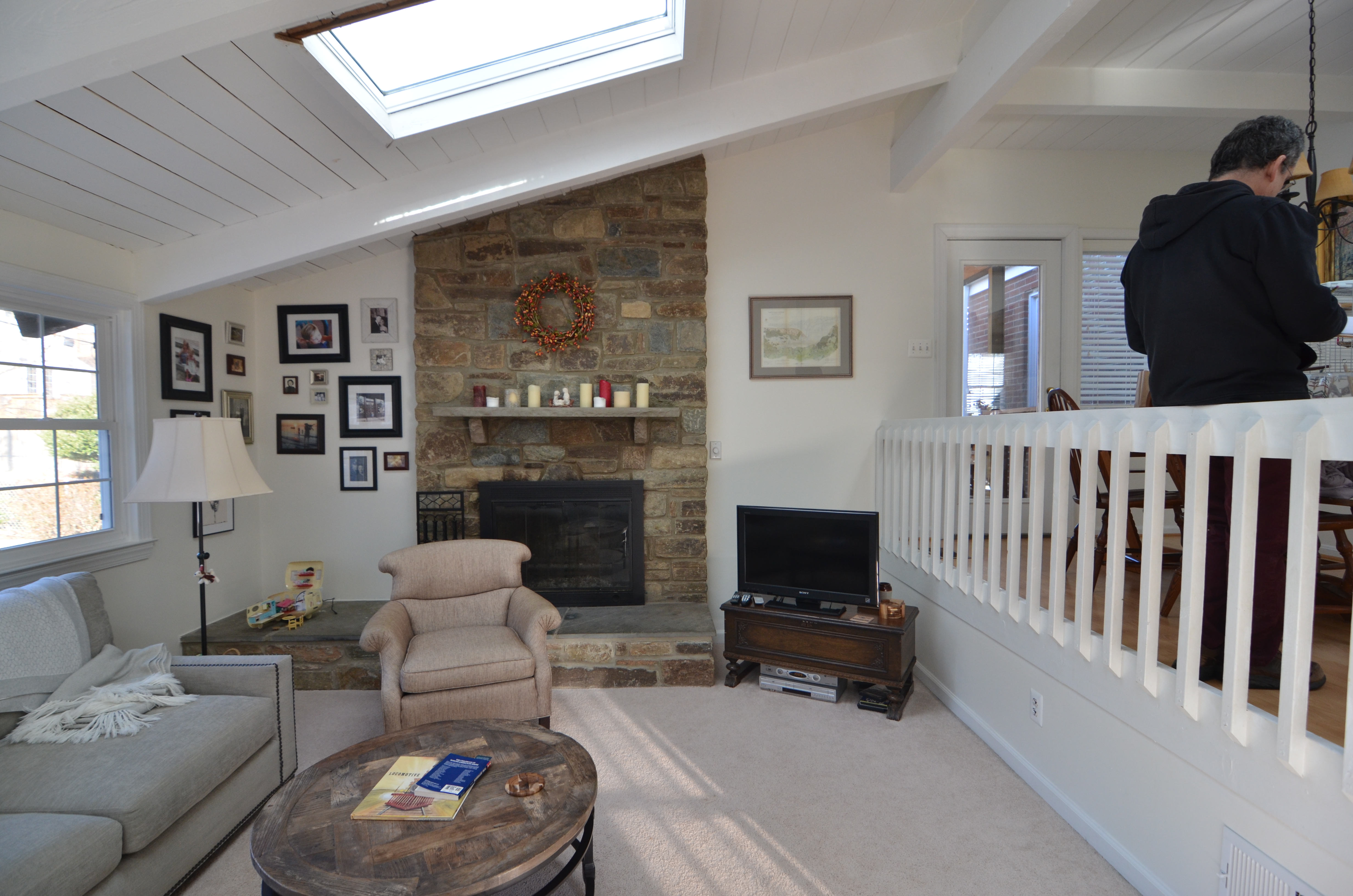 We extended the hearth all the way across the room which visually widens it, provides additional fireside seating, and a spot for a small
wood storage niche.  The mantle is an old barn beam found at Cochran’s Lumber in
Berryville, VA. The coffee table is antique as are the two beautiful little chairs I found in the Friesens’ basement- yes!! I snoop
when decorating!! 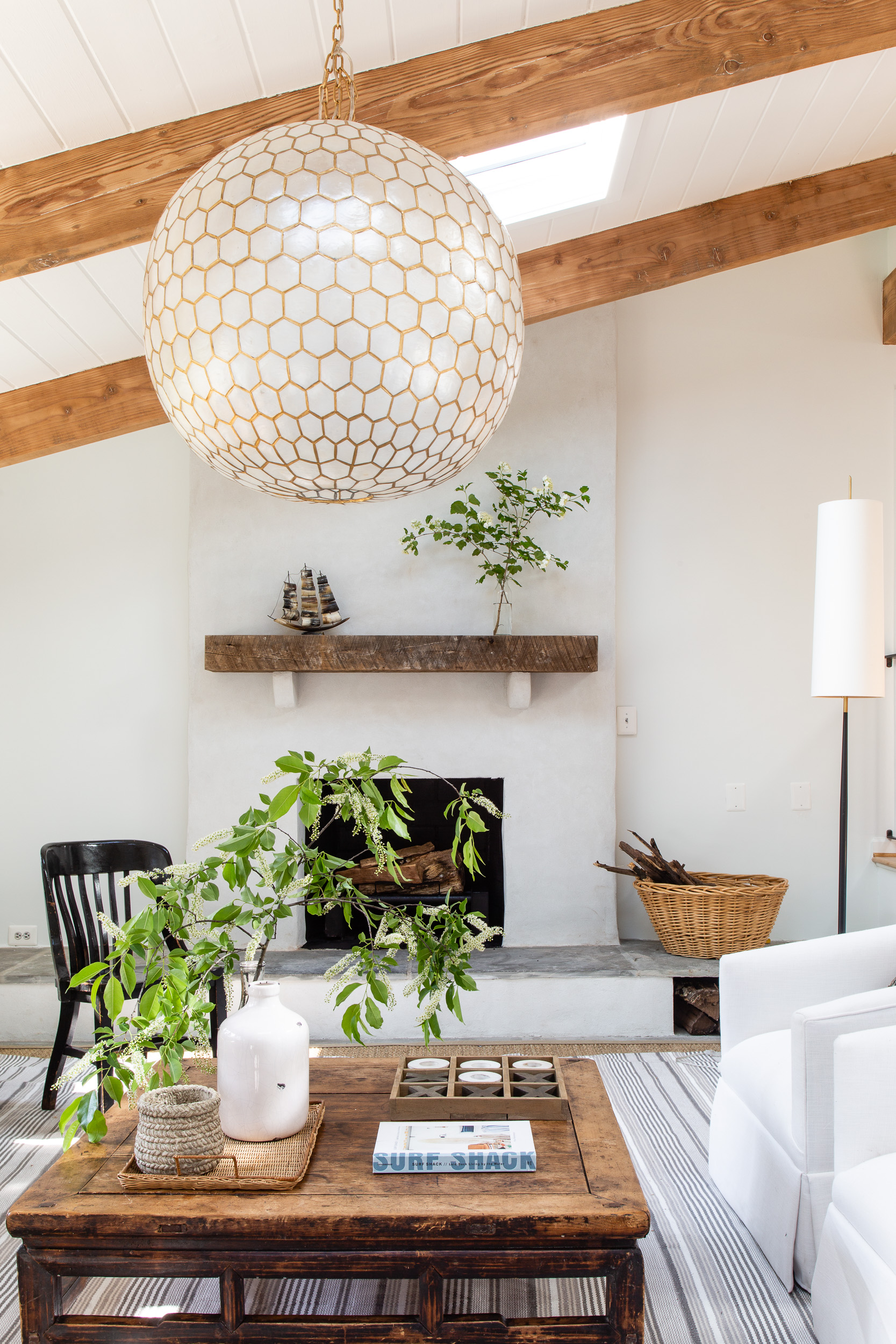 I love the texture of the stucco on the fireplace.

Here’s a view of the area near the back door “before”: 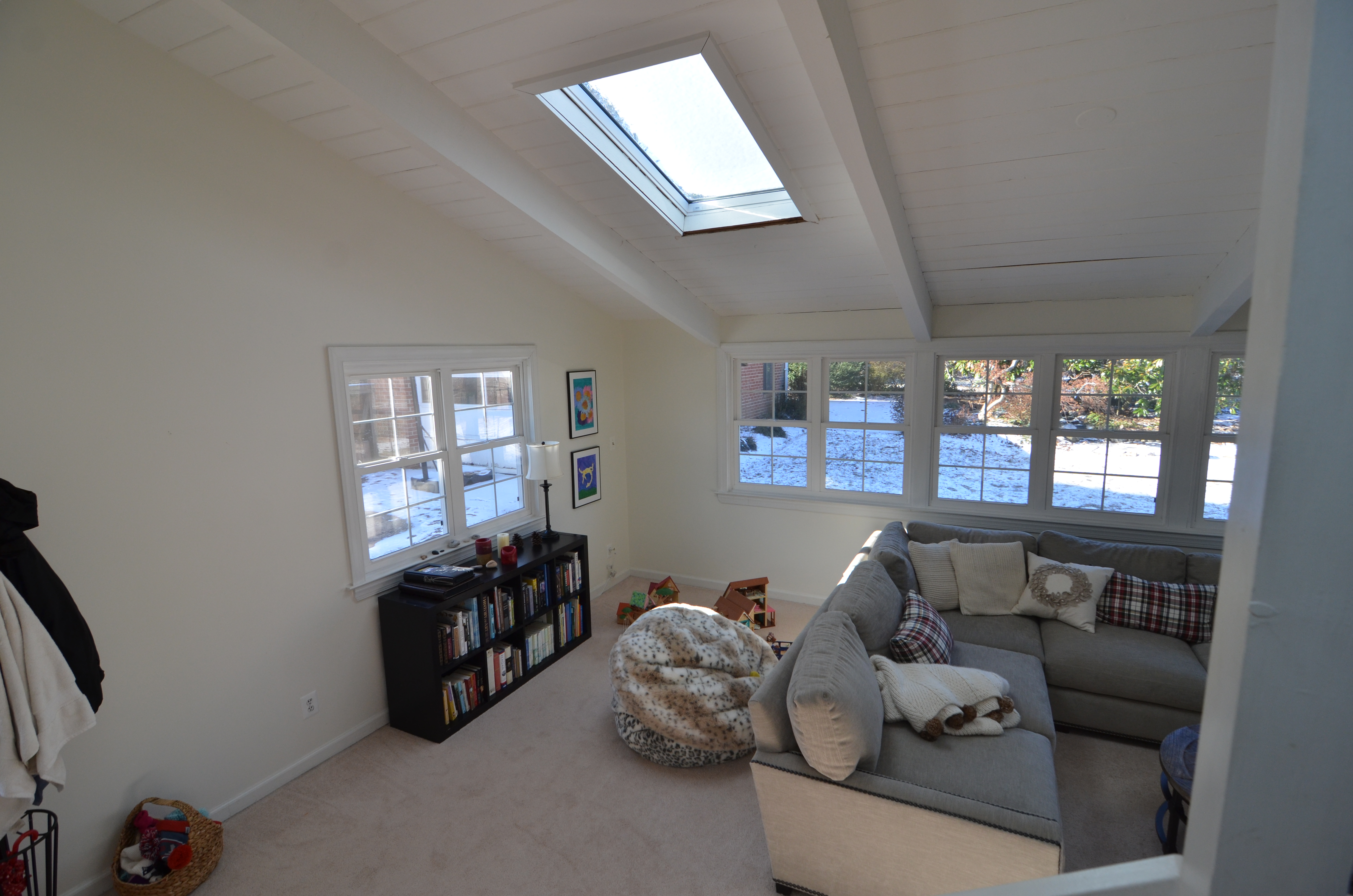 And here it is after we cabinetry to it.  (Sorry- don’t have professional shots of this part & I’m no Helen Norman!!) The doors
can store things like coats & backpacks and the baskets can hold shoes and hats and scarves.

We added a bench under the window which can also do double-duty for extra family room seating:

Here’s a close-up of the irregular flagstone floors:

I’m obsessed with it and pretty much want to use it anywhere it’s appropriate!! 🙂

And that’s it!  The shows are so quick (only half an hour!) and I’m seriously into chronicling things, so I plan on doing a before
& after post of each episode once it airs.  HGTV is airing two episodes per week so I don’t think I’ll be able to keep pace
with that but I’ll get them all finished as soon as I can & I hope you enjoyed hearing a bit about what goes into the design behind
the scenes and seeing Helen Norman’s beautiful photos!!   I’m so thankful to you for following along with us on this crazy
journey and to all of those who helped to make Best House on the Block into a reality: everyone at HGTV, Collins Avenue, our
crew, our clients, my team, all of the vendors, manufacturers and artists we worked with, and Mike Carr and team at CarrMichael Construction!!

Here’s a list of the dates airing Friday mornings:

I know it’s early/ during work hours so be sure to set your DVRs if you can’t see it then! They’ve also mentioned that it might be available
at those times on the HGTV streaming app so will keep you posted on that!