I cannot believe we’ve lived in our house since September; it feels like it’s only been a couple of months! It’s been the busiest eight months
I can remember, but each month it feels like we get a bit more settled and the house becomes a bit more “us.” 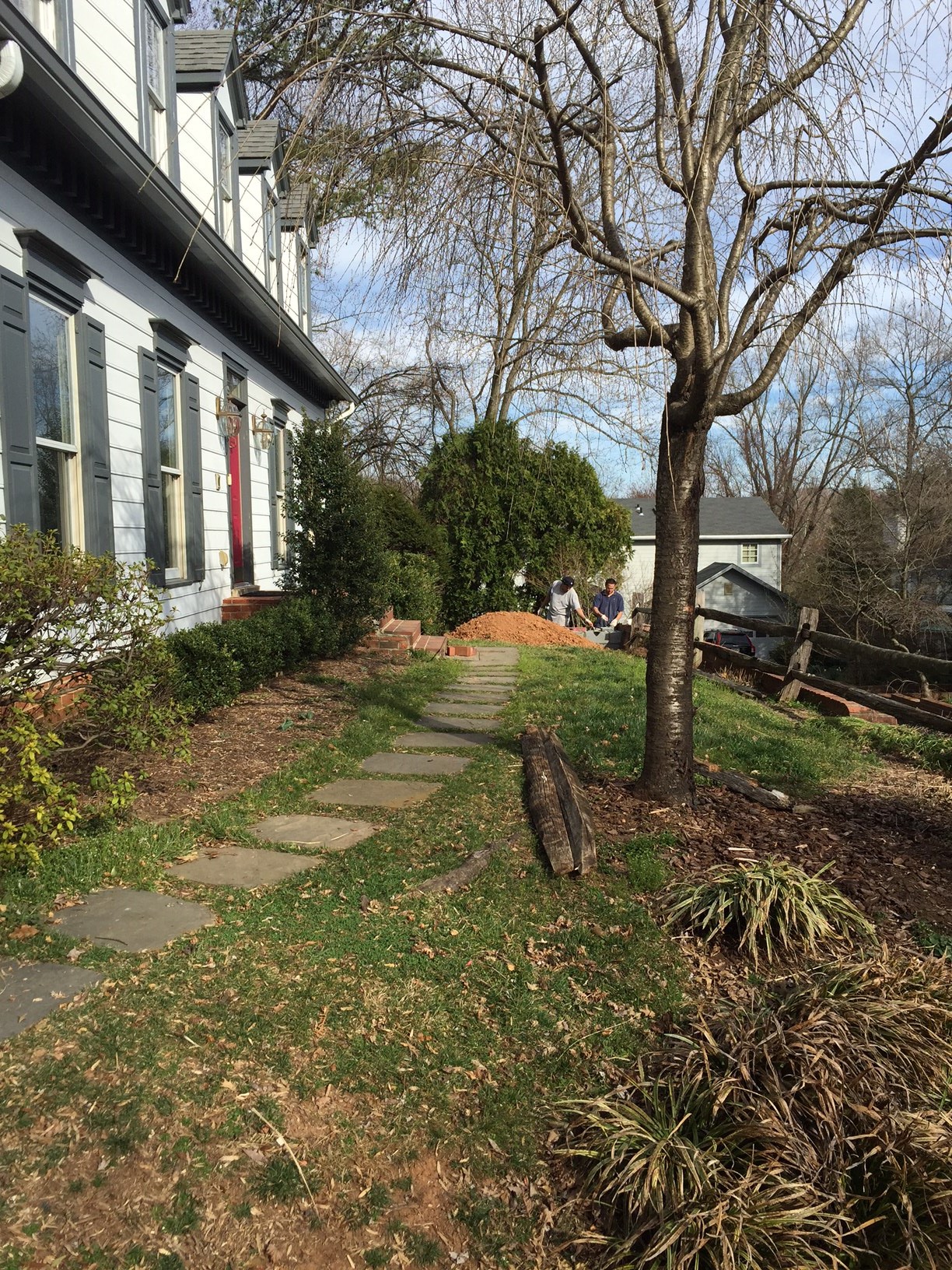 {Our front yard / house “before}

It sometimes feel like as soon as things SHOULD slow down, something hits the fan. Last week my husband, David, had an emergency appendectomy and it’s
thrown us for a bit of a loop. We’re so thankful he’s okay but it was pretty awful… I’ve never seen him in pain like that and it turns out he’s had
appendicitis a number of times- he’s been having episodes since last summer- but when he went to the ER the first time we were told it was a pulled
stomach muscle from working out and so we kept thinking it was that again or food poisoning every time he would have pains… but this time he was
literally falling over and passing out so we headed back to the ER in the middle of the night Monday. He never complains about anything so to see him
not being able to really move or talk was awful. His sense of humor remained in tact though, and as he was being wheeled away to the operating room
I heard a faint “Don’t get remarried!” from the gurney. The surgery went really well and the appendix didn’t burst. He really improved yesterday after
fevers/ chills and being in a lot of pain during recovery.

{David, hanging with the boys the other week just after our new range hood went in. btw- full kitchen before-and-after to come soon when a few more finishing
touches arrive.}

We’ve never had one of us be so down and out on such short notice (babies give us some time for advance planning! 😉 and it’s been a bit nuts. Working
together in the same business, we were a man down at both work and home which was rough. When someone’s been down at work in the past, we’ve had notice
and one of us has been able to work extra hours to make up for it, but because he was out at home too, that wasn’t an option because the kids needed
me. We had to postpone our trip to Birmingham for the Southern Living Idea House install, which of course required all kinds of rescheduling with projects
and client meetings and our calendar. People ask me all the time how I “do it” and it really is because of him. Everything that’s getting done- kids,
moving, renovating, house projects, work etc.- we do as a team, together, so it’s not just me.

{Us, headed out the other week to an event.}

And today is Gisele’s first birthday!! She’s our little Cinco de Mayo baby and I cannot believe she’s one!!! 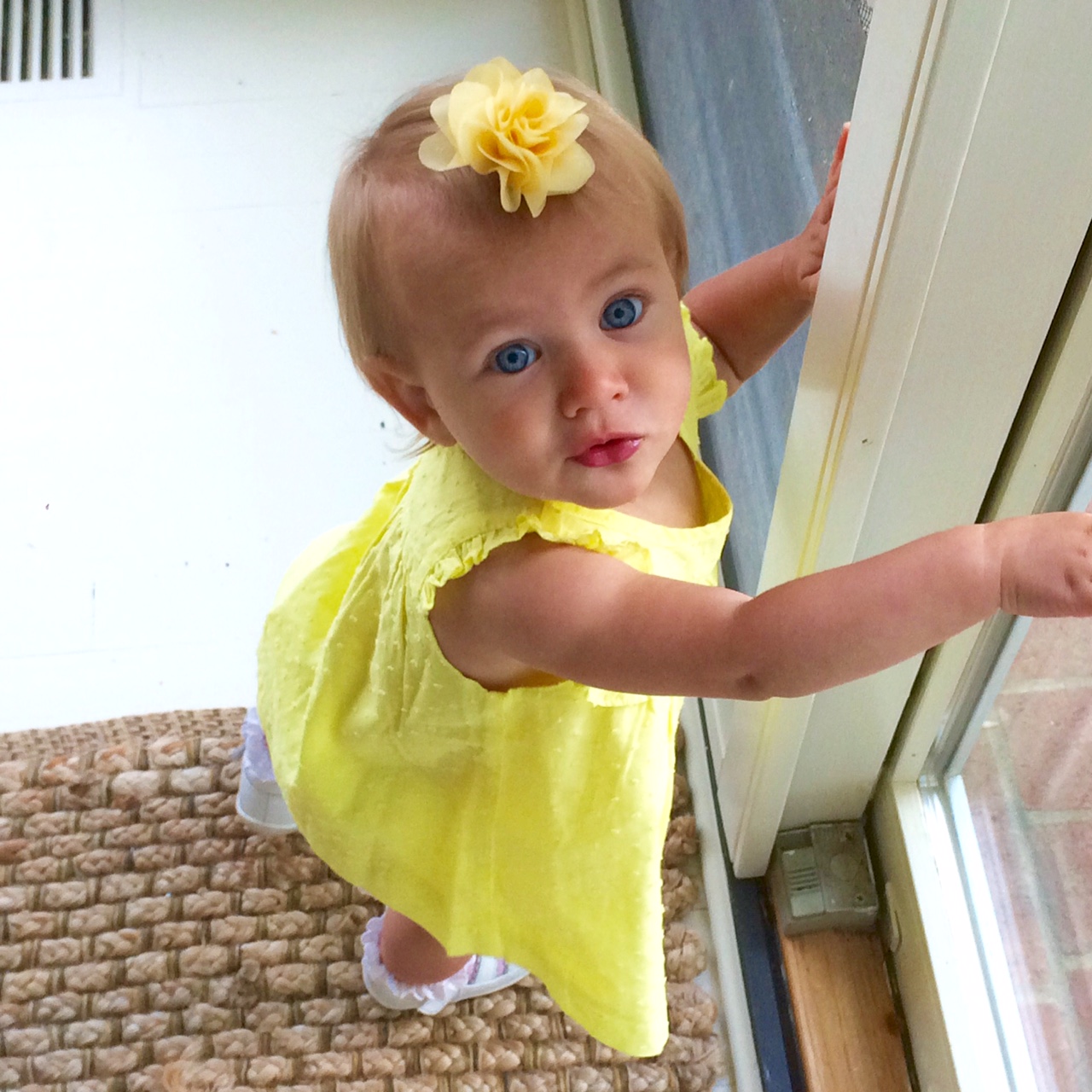 I’ve really tried to keep her close to me this past year- often bringing her with me to work and on work trips, which has probably seemed a little odd
to people at times- because I know how quickly babyhood passes and how easy it is to blink the time away. She is a sweet little happy thing and she
loves to give kisses and hugs. I love seeing how my boys are with her… they’re so gentle and good to her and make her feel special all the time.
They were pulling for another boy and told me before she was born that if we had a girl, they would “scream” (the big boys) and “throw snowballs at
her” (Louie). Now when I remind them of that they crack up and talk about her being the best baby in the world. I love seeing how crazy they are about
each other… I’m not sure there’s a better feeling. 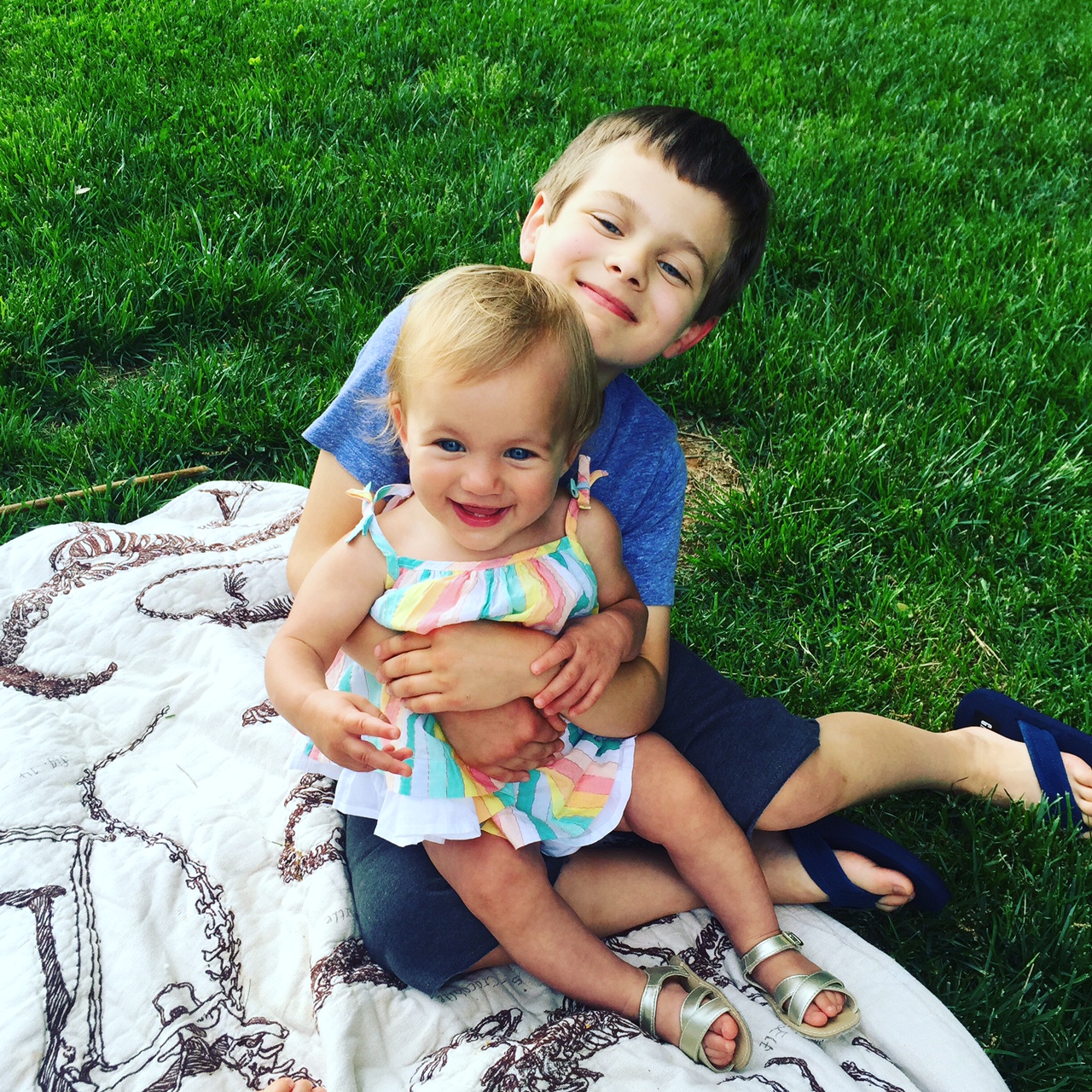 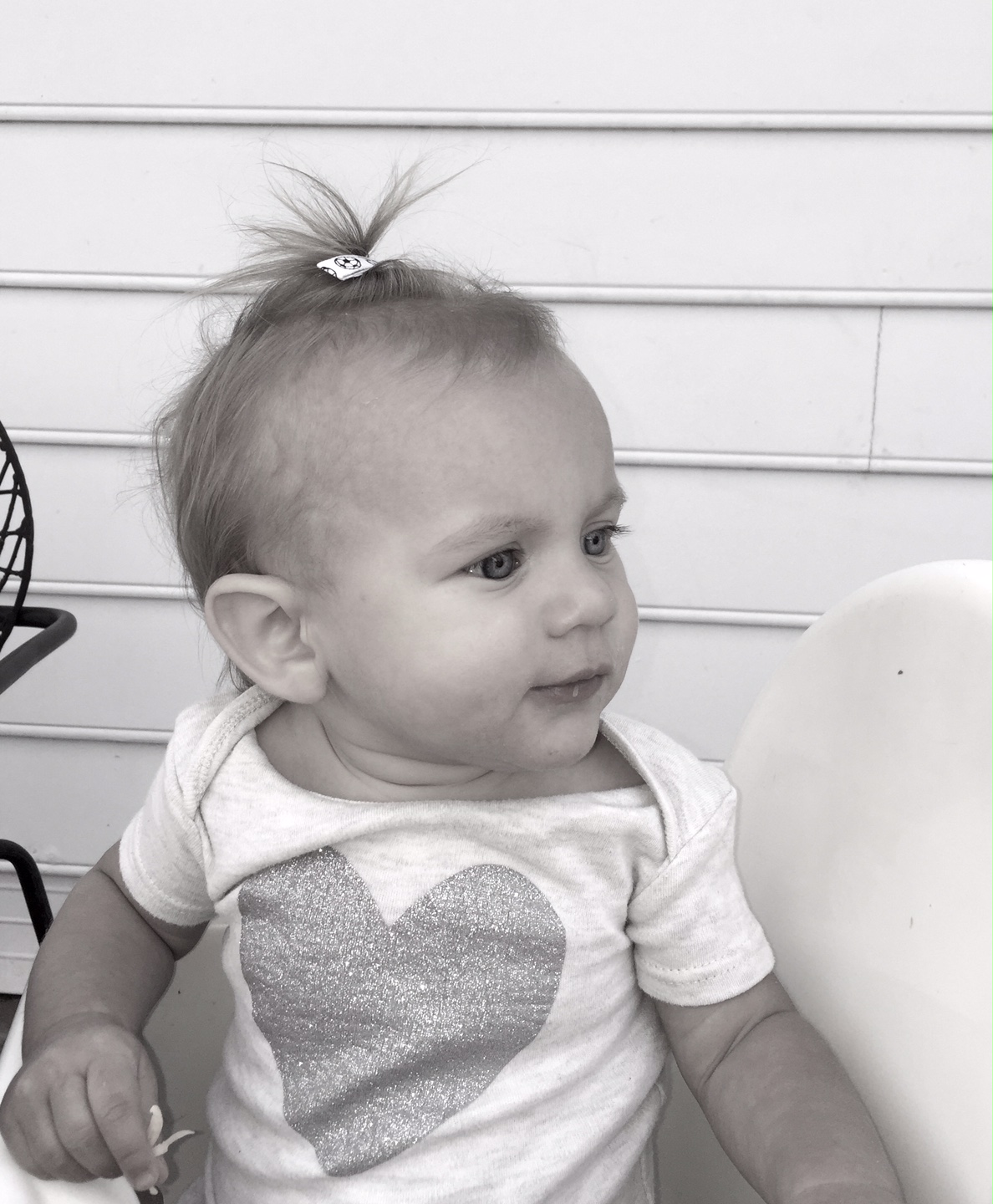 We’ve gotten the house to a better place, tying up some loose ends, and as of Friday, we have all four chairs in our family room/hearth room/ whatever
you want to call it!!! It’s not finished yet, but we can all sit in it and I can’t wait to start enjoying it!! (We’ve been mostly keeping Dave company
in the bedroom while he heals so haven’t really hung there yet.) 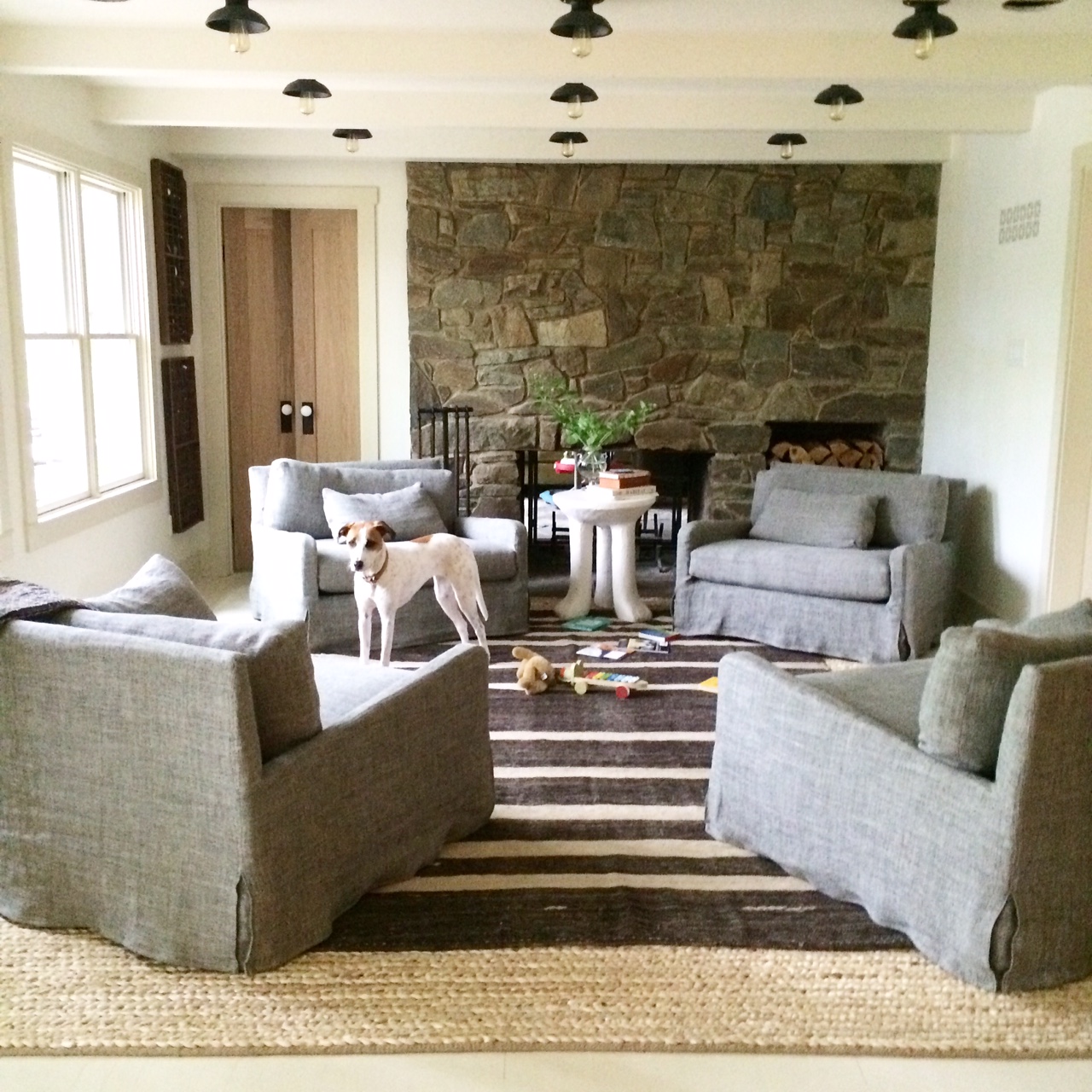 {I’ll take better pictures one day but here is in all of its toy-strewn glory. The chairs are by Verellen. Jute rug by Dash & Albert and the striped
Kilim is vintage. For now, we’re going coffee table-less because we want the floor space for the baby. }

The boys do seem to be enjoying themselves all over the chairs (what’s with kids & floating furniture that makes them want to pole vault it?!!!) and
Fawn (above) seems to have chosen her “spot”- the chair on the left by the fireplace. It’s one of my favorite rooms in the house and I picked these
chairs because there are six of us in the family and they’re so big that at least two of us can sit in each chair. I LOVE four-chair seating arrangements
and have done them for clients (& a showhouse) and have always wanted to one in my own house. They’re so cozy and conversational. The slipcovers
are a nubby black and natural colored woven, which should both stand up to our abuse and hide the dogs’ white fur.

Outside, our front kitchen garden is about halfway in and came to a bit of a halt with last week’s emergency but I’m hoping to get a little planting time
in this weekend. We’ve replaced our broken garage doors (woohooo!!), a couple of the new lights are up by the front door, and the first coat of white
paint is up on the trim in the front of the house. It’s been rainy so that’s on hold but hopefully I’ll be sharing an exterior before-and-after with
you in a couple of weeks!! We’re ordering new window mullions (most of ours were missing and/or broken) for the windows and I think the house will
make so much more sense when they go in.

Our plaster vent registers went in two weeks ago, which really helped to dispell the “construction zone” vibe we’ve had going on and the when the new stair
railing goes in next week, it should almost feel like a normal “finished” house though we’ve still got a ways to go on the decorating front. 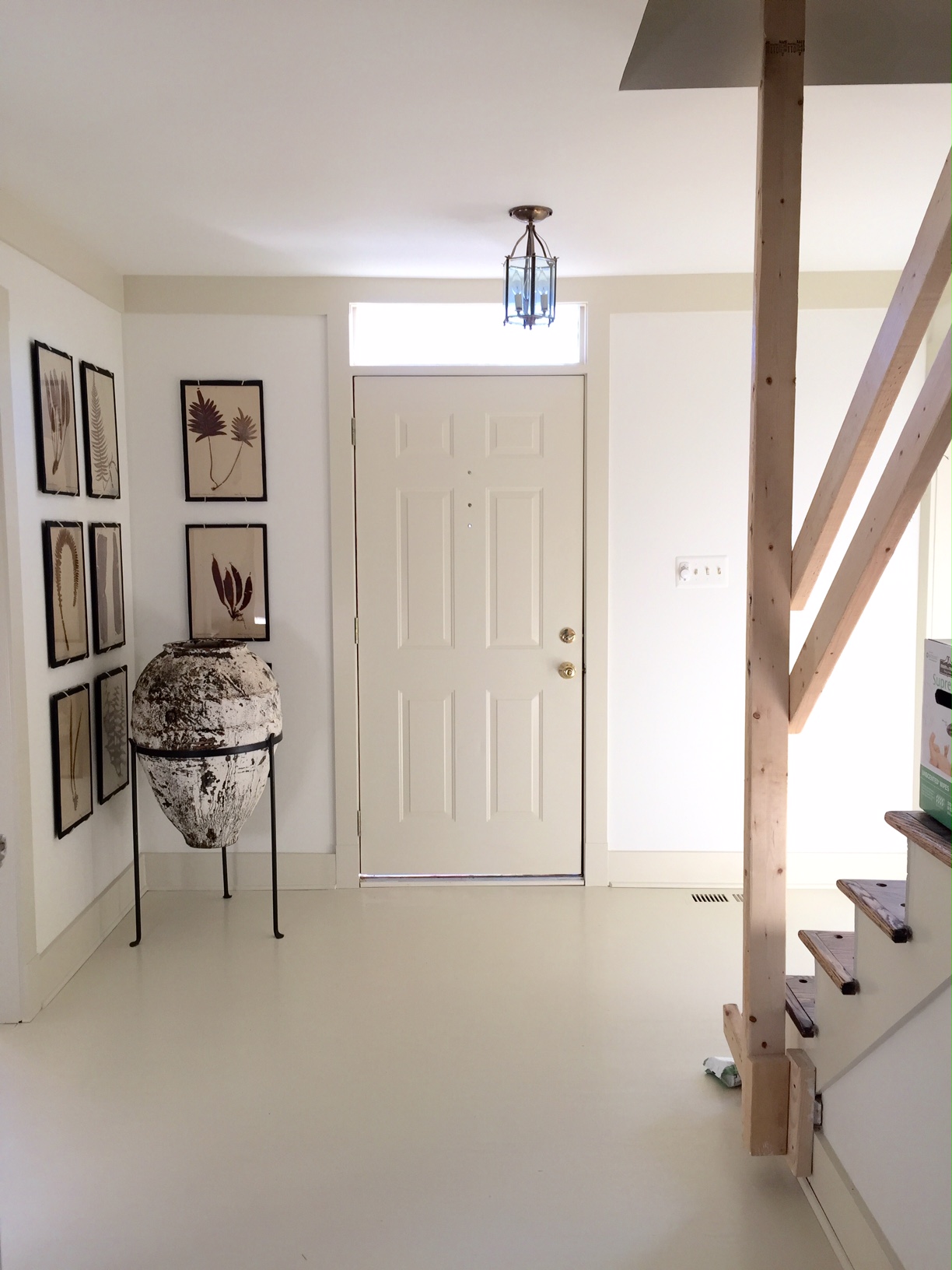 {This uber chic two-by-four beauty of a stair rail will soon be gone!!! I based the design off of a historical railing I fell in love with and cannot wait
to see it in.}

I’m working on finding the right top for this iron wall-mounted console we had made to the right of the front door:

{Excited to have a little drop zone and spot for an arrangement in the foyer. It feels a bit unloved & impractical right now. }

We’re slowly making our way through this place, starting with the architectural elements and major pieces of missing furniture, and over the next couple
of years I’ll get to refining things like lighting, door knobs, and more of the decorating. I’m in the process of designing wallpapers for the kids’
rooms and they’re up next on my plan of attack. Now that we have furniture in the room we spend the most time in, things are feeling so much more livable
and settled.. It might not be anywhere near “finished” but it doesn’t feel like things are missing anymore, which makes such a difference. In our last
house, we were pretty much done eight months after we first moved in, but it feels like we’re only about a third of the way through with this one due
to its size.  I’m honestly DREADING redoing our bathroom (which is currently an 80s marble surprise hallway leading to our bedroom which seems
to be grand central station for the family- such a mess!) and am looking forward to just relaxing for a year or so with (hopefully!) no projects on
the side at home . My cousin’s house in Florida is almost completely built and I’m on a huge time crunch to design the interiors on the side so
that’s taking up most of my free time right now, but when that’s over I hope to truly stop and chill for a bit (besides moving our design studio).
It’s been a couple of years since I didn’t have something major happening on the side – a baby (not exactly “on the side” but definitely major) ,
a renovation, a move, a book, showhouse etc.- and I’m ready for some downtime.  We’re really hoping to recharge a bit this summer.

Also, I want to say “thank you” so much to all of you who have joined in with #loveyourhabitat on Instagram!  I have absolutely LOVED seeing
snippets of your beautiful homes, families & lives!!

As of this morning we have 672 #loveyourhabitat tagged posts and they’ve been steadily coming in every day since we started  it.  I’m truly
amazed at the talent and heart everyone seems to have and I love connecting with you all this way.  I’m seeing friendships develop among posters
and it’s really cool to watch.  For anyone, new #loveyourhabitat posts are ones that show your home being truly enjoyed, loved and lived
in, whether perfect or messy.  We’d love to see your pics!!

And finally, Habitat: The Field Guide to Decorating (my book) is on sale at amazon today for over 30% off the cover price and
can arrive before Mother’s Day, so if you haven’t gotten a copy, now is a good time!!!

Anyway, I’m off for the day, but have a beautiful cinco de mayo!!!  Hoping to pop in before Mother’s Day, but if not, hope you get some quality time
in with your mamas, mama friends  or children!!