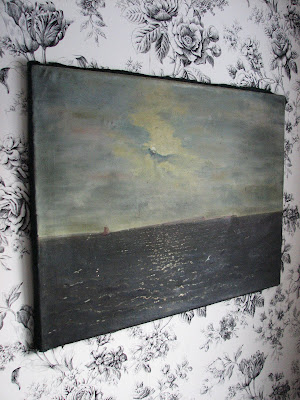 I’m crazy about this oil painting painting I recently found for our kitchen nook.  It’s by a German artist named Decker and was done in 1886.  You know when something just calls to you?  (“Buy me!!” 😉  I didn’t know where I’d put it (I rarely do with art…  If I love it, I know I’ll find a spot) but for $60, I was thrilled. It’s full of my colors and I just love its moodiness.
I’ve been meaning to  get something up on the left side of my kitchen nook for a while now…   Here’s a photo of the right side with the chalkboard:
The green in my cabinets (Behr’s Witch Hazel in Semigloss) works perfectly with the Decker painting:
I’m leaving it unframed and I love seeing the tattered sides of the canvas.  The painting is so beautifully aged.
And here it is up in “the nook.”
I’m never one for permanence in my home, but it’ll be staying in the nook for a good long time!  While I do appreciate museum-quality art (who doesn’t?)  I’m always on the lookout for beautiful inexpensive original paintings.  (And by inexpensive I mean under a $100 and preferably in the $30 – $50 range…  I know that’s cheap, but I feel no guilt at checkout! 😉
xoxo,
lauren
ps- The white floor vent register seen in the pics has finally been replaced!!  wahooo