Skip to content
Skip to content
We officially FINISHED my dad’s lake house this weekend & we’re so happy with how it turned out!!   We installed and photographed it last week & then got to spend a relaxing weekend there afterwards— exhaling and watching my cankle swelling go down.  We didn’t have the entire place photographed for the book so I thought I’d share some of the iphone pics I snapped of the rooms not being being featured over the next couple of weeks.  One of those spaces is the master bath off of my dad’s room.  Here it is “before”: 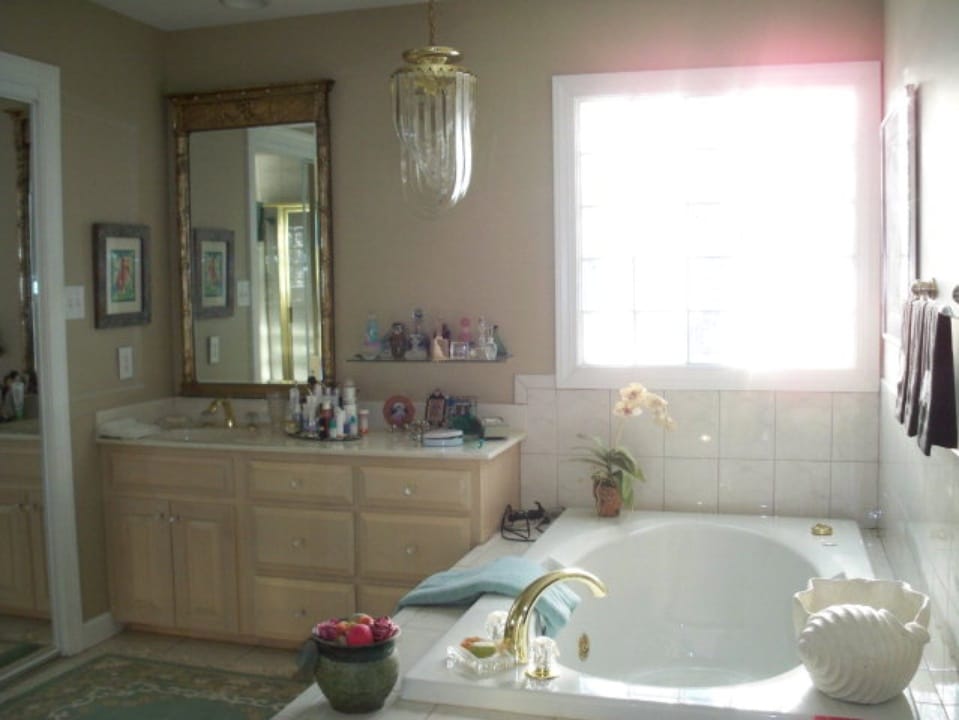 {On a sidenote— I saw a pair of the exact same lucite and brass light fixtures on sale at Market this Fall for $4900!! crazy.}
We originally planned to do nothing to bathroom other than painting the vanities, replacing plumbing fixtures and removing the decorative lighting & mirrors, but about a month ago our contractor found that the shower was leaking and that we’d need to retile it so we decided that while they were at it, we should retile the floors and tub surround too.  (and then the countertops in a sort of If you Give a Mouse a Cookie fashion.)  My dad was pretty much fine with the bathroom as it was so I didn’t do any decorative lighting or special mirrors and just hoped to update it a bit.  It was an afterthought full of game time decisions and I was honestly shocked when I walked into the finished bathroom for the first time, because I hadn’t spent much time thinking about it and just didn’t realize how much I’d like it when we were done.
Here it is now: 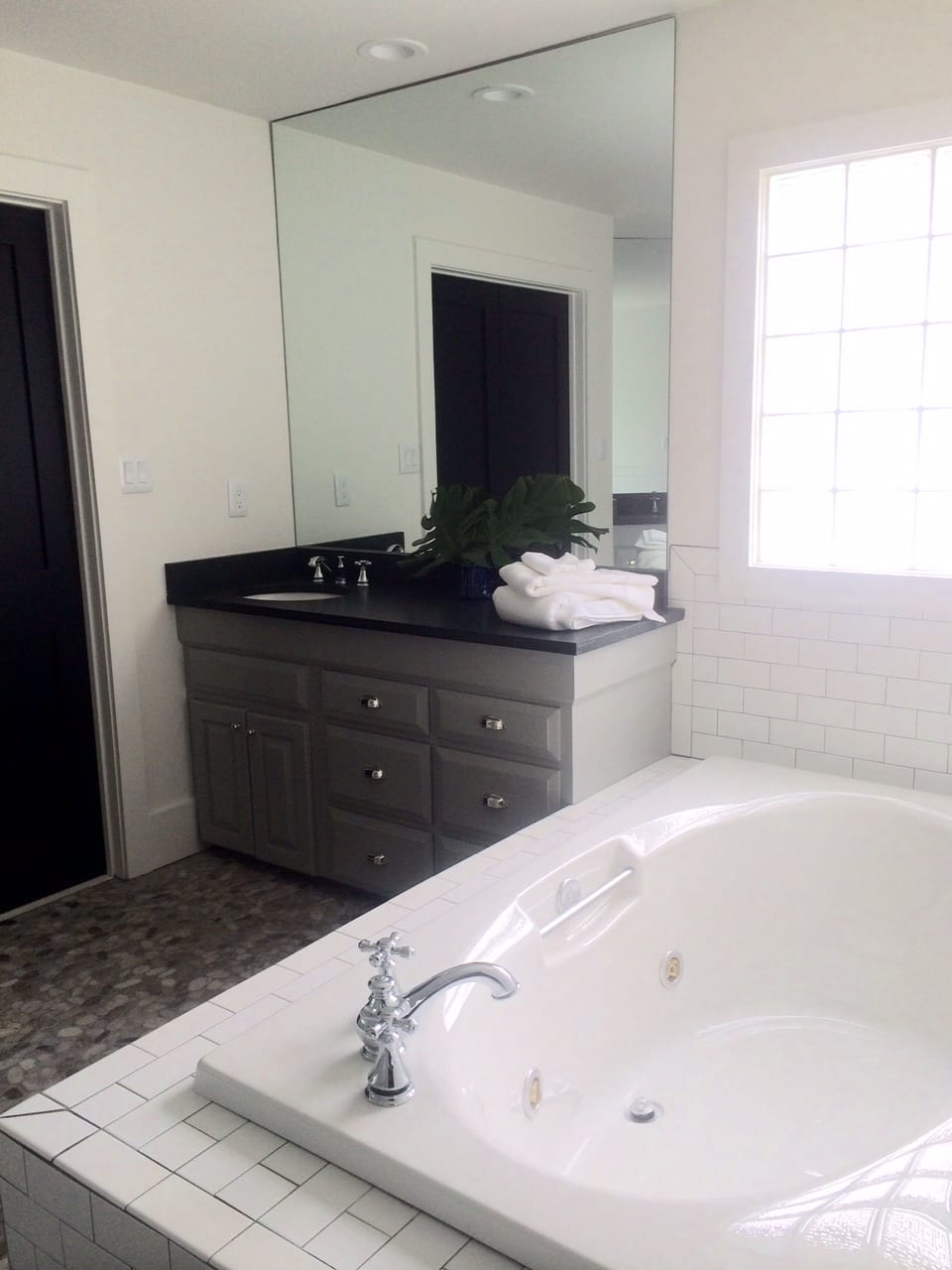 We replaced the floor tile with river rock and I’m seriously gaga for this stuff.  We used a gray grout and I think my dad is going to love it.  We replaced the tub surround and shower walls with inexpensive subway tile and also used gray grout.  We kept the original tub and swapped the brass tub filler with a classic polished nickel one.  The grab bars have been sprayed and I don’t think they’ll last very long but we figured it was an easy temporary fix for now. 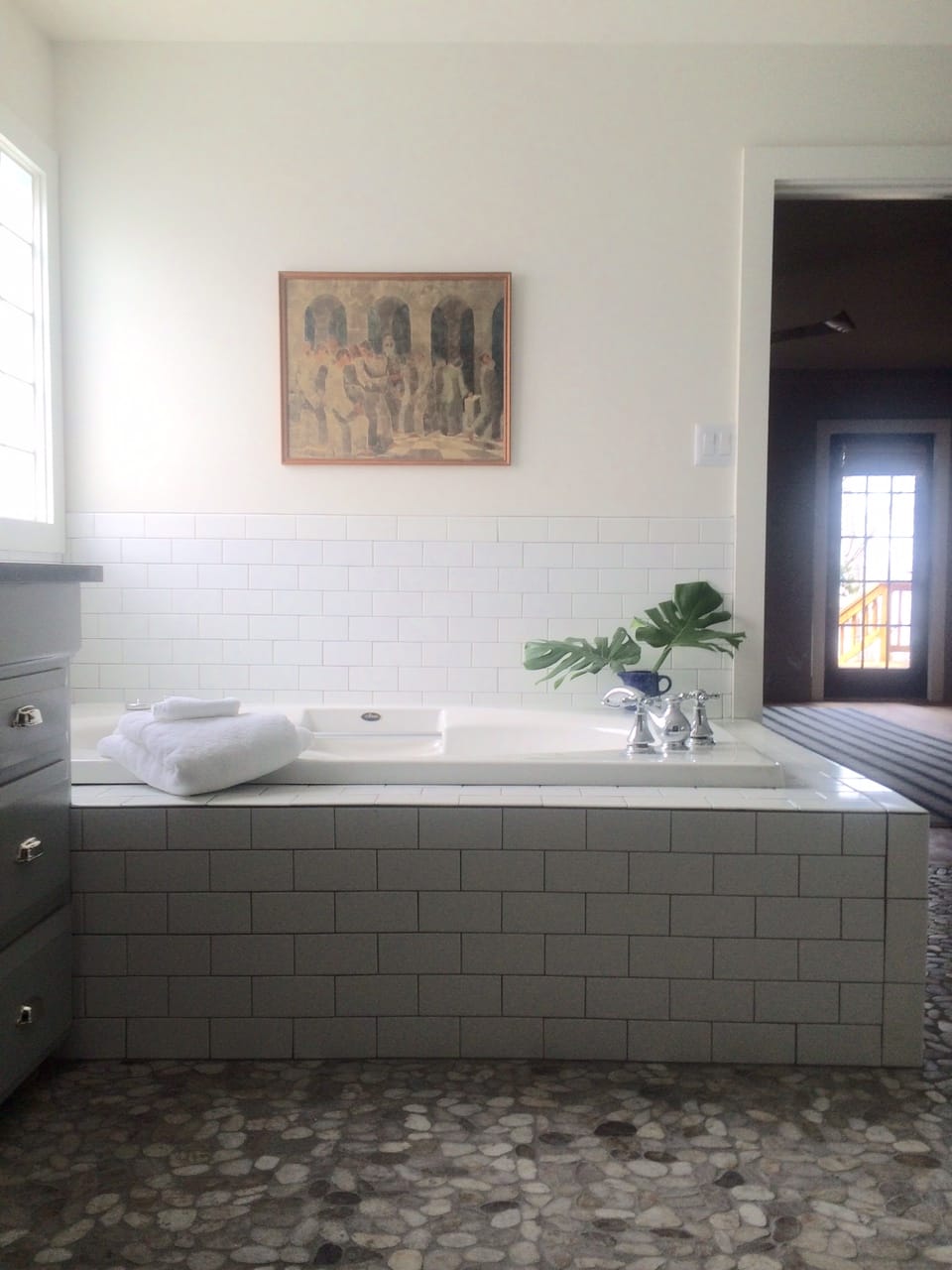 Our contractor (Sid Cutts of Corbitt Hills Construction) suggested raising the height of the vanities to 36″ (they were previously only 30″ high) and- OH MY GOSH – so happy we did.  My dad’s a tall guy and this will be so much better on his back.  They simply added a panel above the existing cabinetry and then painted the whole thing and swapped out the hardware with the more masculine polished nickel ones I’d found: 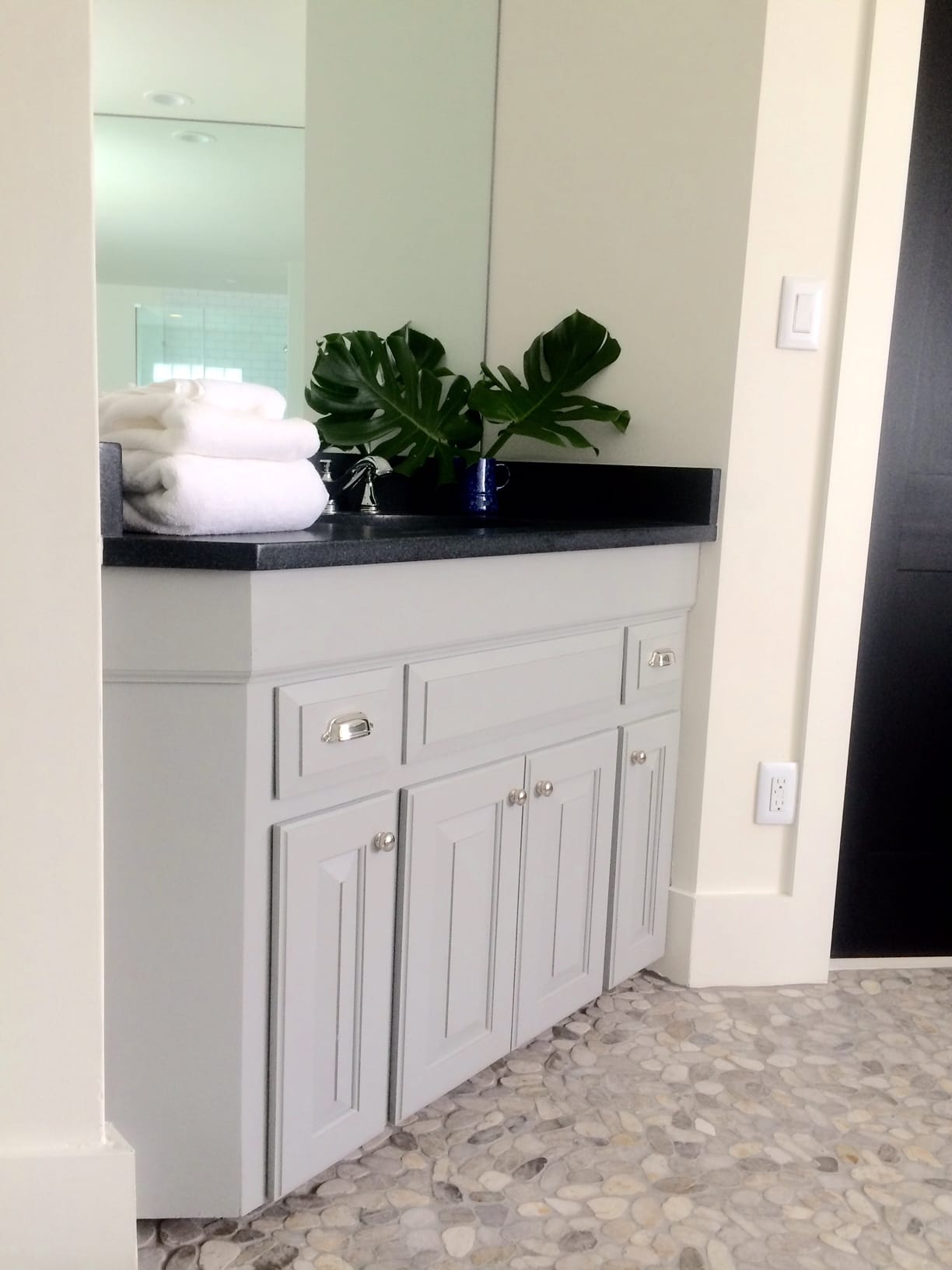 We had plain mirrors cut for above the vanities and went with honed absolute black granite remnants for the new countertops. 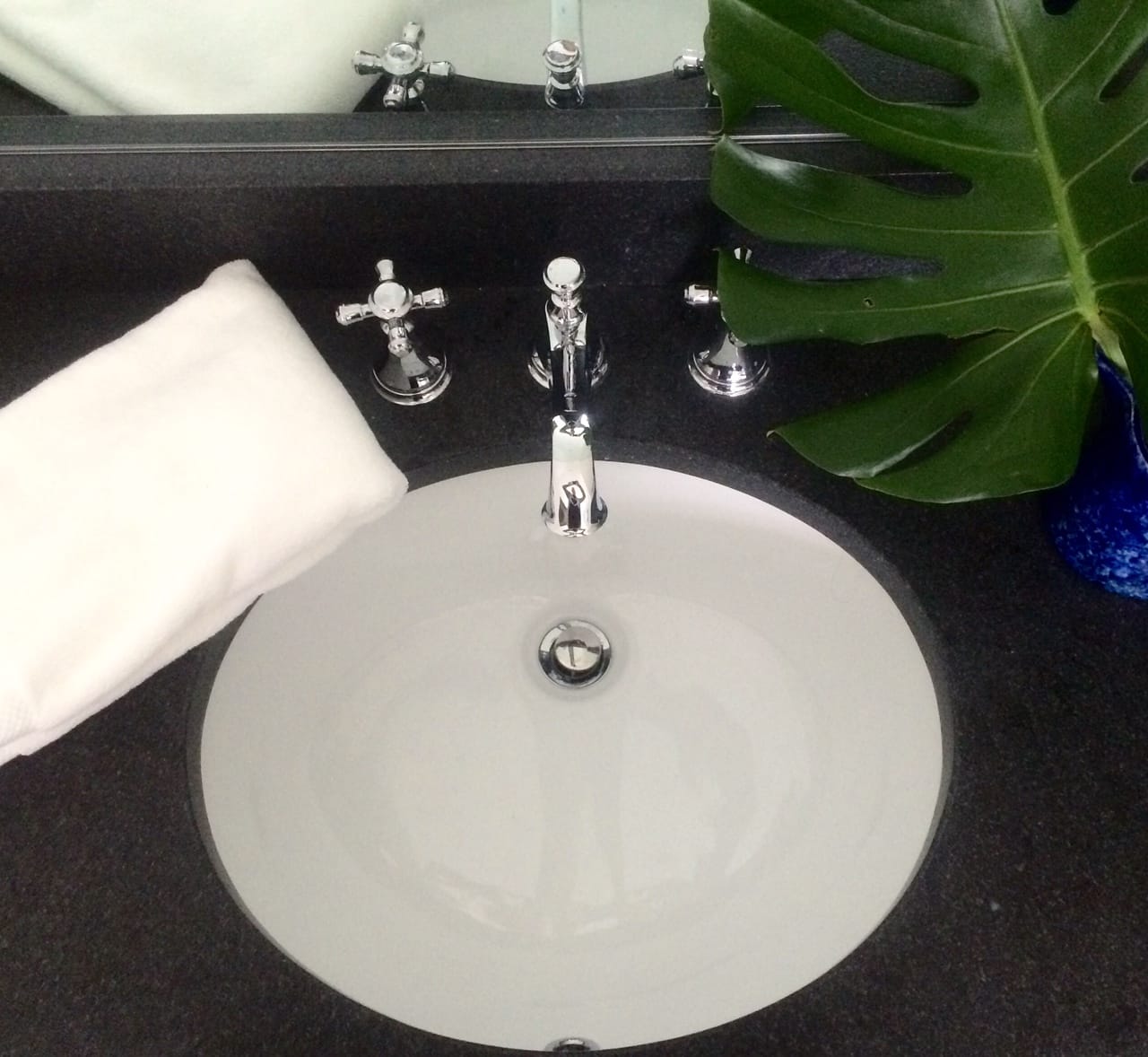 {I’m a little obsessed with these tropical leaves and put them in pretty much every picture because they make everything look better.}
The shower feels clean & fresh with new simple seamless glass doors, white subway tile and basic polished nickel fixtures: 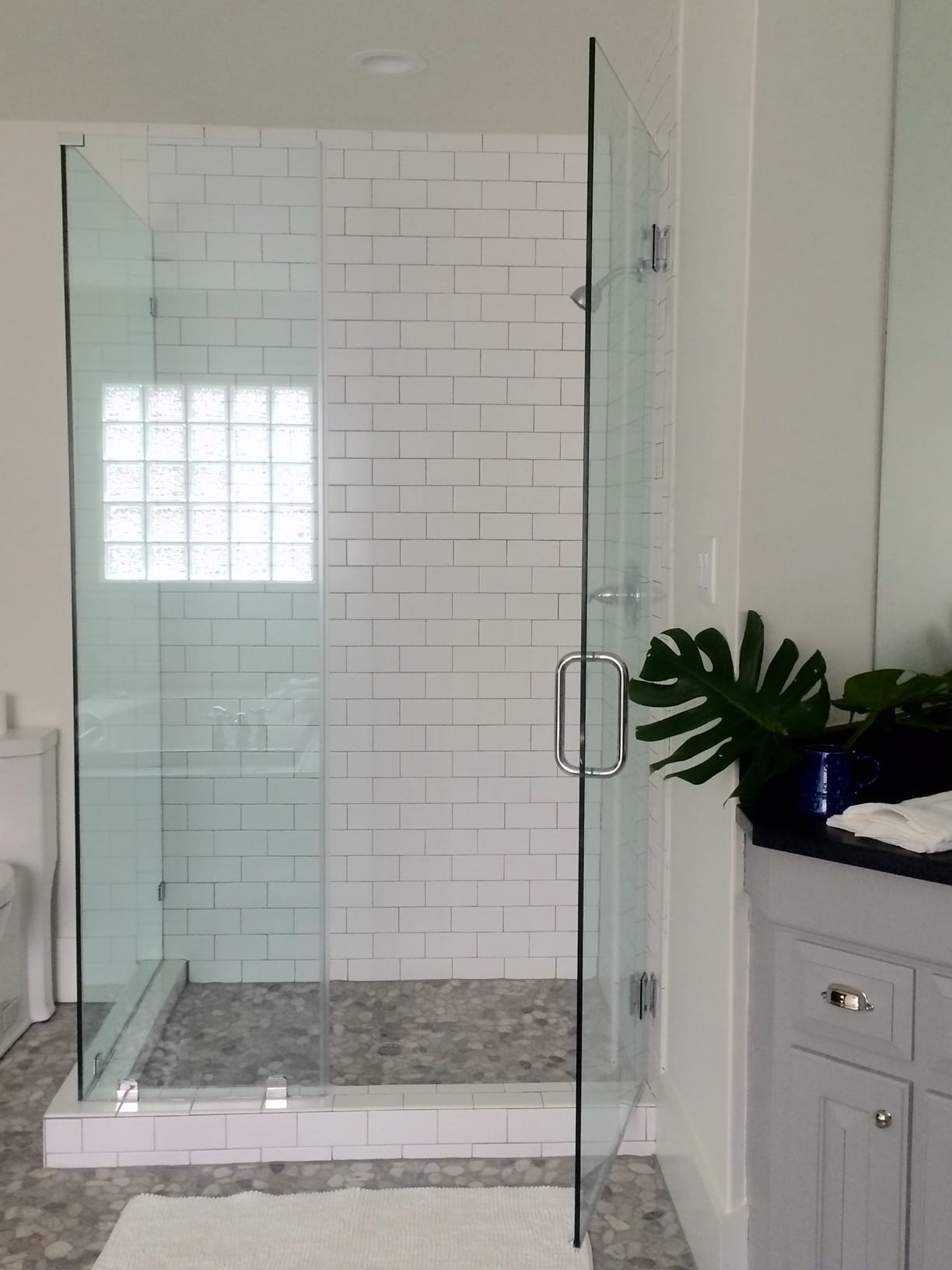 We had a blast giving the kids a bubble bath and turning on the jacuzzi jets.  (yeah, I know you’re not supposed to do that to the jets but it’s way too much fun to care.) It was ridiculous!!! The bubbles were eating them alive.
Anyway, my dad will see the house for the first time in less than two weeks and I CANNOT wait!!!!  I think he’s going to flip out and I’m really hoping that some of the more modern elements in other spaces of the house aren’t too much for him.
Hope you enjoyed this little peek into the project!  Full reveals of the house will be featured in my book (Habitat: The Field Guide to Decorating– due Fall 2015)and -SERIOUSLY- this fall can’t come soon enough for me!!  (I’m trying not to wish the time away because we have such a special Spring & Summer in store with the new baby, but it’s crazy to have so many projects hidden for so long!!)
…And on a quick book note: I think we may have arrived at the final photo for the cover and I’m so excited!!! It’s been such a crazy process because it’s something that everyone (me, my editor, and the team at Abrams) all have to agree on…   Because there are so many different types of styles featured throughout the book, it’s been tough getting everyone to agree on the same image.  I love all of the photos in the book so much but selecting the one that epitomizes my style is a tall order.  Anyway, I think we got one last week and I’m hoping to be able to share it with you soon!!  Fingers crossed!!